Jed Alegado (@jedalegado) is a climate campaigner based in the Philippines. He holds a masters degree in Public Management from the Ateneo School of Government. 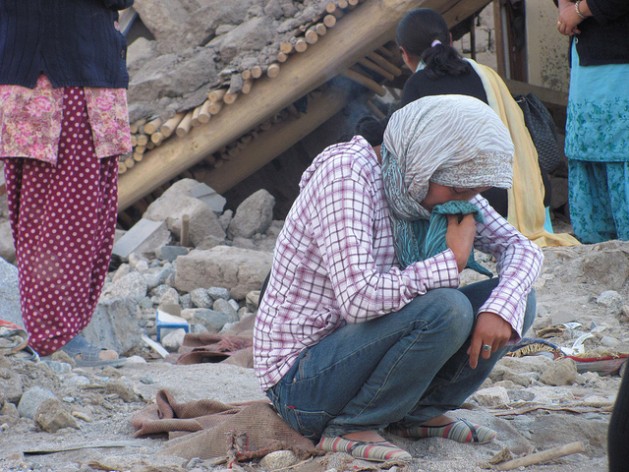 Stanzin Dolma of Choglamsar-Leh breaks down while showing the ruins of her home, wrecked by the August floods and landslides in India in 2010. Credit: Athar Parvaiz/IPS

MANILA, Jul 8 2015 (IPS) - The Association of Southeast Asian Nations (ASEAN) started as a cooperation bloc in 1968. Founded by five countries – Thailand, Singapore, Malaysia, Indonesia and the Philippines – ASEAN has since evolved into a regional force which is slowly changing the landscape in global politics.

Five decades later, amid changing geopolitics and dynamics in the region, ASEAN faces a daunting task this year as it gears up for ASEAN 2015 economic integration amidst uncertainty in light of climate change impacts.

With a region dependent on agriculture for food security and livelihoods, ASEAN needs to step up its fight against climate change. Oxfam GROW East Asia campaign recently released a report titled “Harmless Harvest: How sustainable agriculture can help ASEAN countries adapt in a changing climate.”

It argues that “climate change is undermining the viability of agriculture in the region and putting many small-scale farmers’ and fisherfolk’ livelihoods at risk.”

Data from the International Rice Research Institute (IRRI) revealed that rice yields drop as much as 10 percent for every 1 percent rise in temperature – an alarming fact for a region which counts rice as the staple food.

The planned 2015 economic integration is unveiling amidst a backdrop of threats to agriculture in the region due to impacts of climate change. For ASEAN 2015 integration to prosper and its promised economic growth to be shared mutually, ASEAN must unite against climate change by taking a definitive stand as a regional bloc.

First, at the global climate negotiations of the United Nations Framework Convention for Climate Change, ASEAN leaders must unite behind a fair and binding agreement toward building a global climate deal in Paris this year.

Second, in terms of climate change mitigation, ASEAN needs to harmonise existing policies on coal and level the playing field where renewable energies can compete with other sources of energy. Furthermore, the 2015 economic integration must be clear on charting a low-carbon development plan for the region.

Third, ASEAN must ensure that its economic community-building is geared toward low-carbon development anchored on sustainability and inclusive growth. It can start by ensuring that regional policies in public and private investments in agriculture and energy do not threaten food security, improve resilience against climate-related disasters, and respect asset reform policies and the rights of small food producers.

Lastly, ASEAN leaders must also ensure that policies will be in place to shift the funding support from industrial agriculture to sustainable agricultural practices promoting agro-ecology and sustainable ecosystems.

ASEAN can do this by ensuring that each governments allocate sufficient financial resources for community-driven climate change adaptation practices while working with communities and peoples’ organisations on knowledge-sharing and learning best practices.