Farhang Jahanpour is a former professor and dean of the Faculty of Foreign Languages at the University of Isfahan and a former Senior Research Fellow at Harvard University. He is a tutor in the Department of Continuing Education and a member of Kellogg College, University of Oxford. This is the sixth of a series of 10 articles in which Jahanpour looks at various aspects and implications of the framework agreement on Iran’s nuclear program reached in July 2015 between Iran and the United States, United Kingdom, Russia, France, China and Germany, plus the European Union. 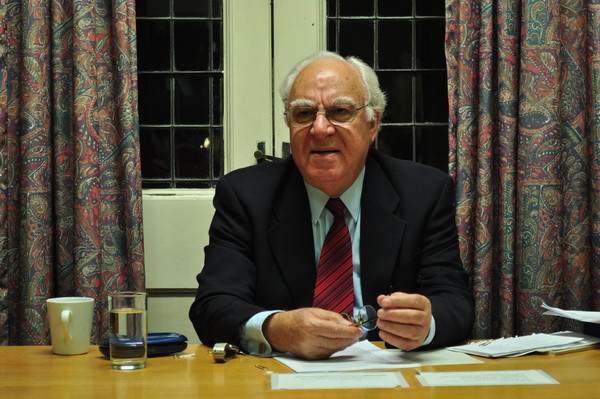 OXFORD, Sep 18 2015 (IPS) - In their attempts to sabotage Iran’s nuclear program, the United States and Israel have resorted over time to a number of unorthodox, illegal and in some cases criminal methods to achieve their aims. They have included the following:

1. Constant vilification of the Iranian nuclear program despite evidence to the contrary.

Since the resumption of the Iranian nuclear program after the Islamic revolution, Western leaders have openly accused Iran of pursuing a military program, despite the lack of any evidence. The claims regarding Iran’s military intentions have been repeated non-stop, along with allegations that Iran was a few years away from manufacturing a bomb.

Here are just two early examples. An April 24, in a 1984 article entitled “‘Ayatollah’ Bomb in Production for Iran,” United Press International warned that Iran was moving “very quickly” towards a nuclear weapon and could have one as early as 1986. In April 1987, the Washington Post published an article with the title “Atomic Ayatollahs: Just What the Mideast Needs – an Iranian Bomb,” in which reporter David Segal wrote of the imminent threat of such a weapon.

This pattern of reporting by Western and Israeli press has continued unabated, despite the fact that they have been proved to be wrong time and again.

There have been at least four documented cases in which Iranian nuclear scientists have been assassinated on the streets of Tehran. Israeli agencies have been implicated in those assassinations. A number of suspects who had been arrested testified that they were members of the terrorist organization, the Mojahedin-e Khalq, who had been recruited by Mossad, taken to Israel and trained in the use of those explosive devices.

A month after the January 2012 assassination of Ahmadi Roshan, an Iranian nuclear scientist and university professor, NBC News reported: “Deadly attacks on Iranian nuclear scientists are being carried out by an Iranian dissident group that is financed, trained and armed by Israel’s secret services, U.S. officials tell NBC News, confirming charges leveled by Iran’s leaders… U.S. officials, speaking on condition of anonymity, said the Barack Obama administration is aware of the assassination campaign but has no direct involvement.”

3. Acts of sabotage against Iranian nuclear and military installations.

On 12 November 2011, there was a massive explosion at an Iranian military base that killed Major General Hassan Moghaddam and 16 soldiers of the Iranian Revolutionary Guard, as well as causing extensive damage to the base. As usual, Israel did not confirm or deny responsibility for the explosion, but Israeli media pointed to the possible involvement of Mossad. The Yediot Aharonot newspaper reported that “some assessments” indicated that the blast was “the result of a military operation based on intelligence information.”

According to Annex III of the Joint Comprehensive Plan of Action (JCPOA) on “civil nuclear cooperation,” otherwise known as the framework agreement on the Iran nuclear program, the signatories commit to “co-operation through training and workshops to strengthen Iran’s ability to protect against, and respond to nuclear security threats, including sabotage, as well as to enable effective and sustainable nuclear security and physical protection systems”.

However, it seems that far from condemning Israeli acts of sabotage against Iranian installations, some U.S. officials are even worried that the deal might prevent Israel from continuing these illegal activities. This provision of the deal doesn’t mention any countries by name, but U.S. Senator Marco Rubio wondered if this was included in the deal because of Iranian concerns related to a specific US ally.

“If Israel decides it doesn’t like this deal and it wants to sabotage an Iranian nuke program or facility, does this deal that we have just signed obligate us to help Iran defend itself against Israeli sabotage or for that matter the sabotage of any other country in the world?” Rubio asked at a congressional hearing on the agreement. U.S. Secretary of Energy Ernest Moniz replied that “all of our options and those of our allies and friends would remain in place” after the deal goes into effect.

In 2010, Iran announced that uranium enrichment at Natanz had been disrupted and as many as 1,000 centrifuges had been damaged. It was subsequently reported that the destruction was due to cyber terrorism. In June 2010, anti-virus experts discovered a sophisticated computer worm dubbed “Stuxnet,” which had spread to Iranian centrifuges at the Natanz plant and had damaged many of them. The New York Times subsequently reported that Stuxnet was part of a U.S. and Israeli intelligence operation called “Operation Olympic Games,” initiated by President George W. Bush and expanded under President Barack Obama.

At the time that the worm was reportedly infecting the Iranian machines, International Atomic Energy Agency (IAEA) cameras installed in Natanz recorded the sudden dismantling and removal of approximately 900–1,000 centrifuges. These were quickly replaced, however, and Iran resumed uranium enrichment. The West regards cyber terrorism as an act of war, yet it is willing to cooperate with Israel in cyber terrorism against Iran. This will open Pandora’s box.

5. Spying on allies during the nuclear negotiations

U.S. officials have accused Israel of spying on nuclear negotiations with Iran and of “cherry-picking specific pieces of information and using them out of context to distort the negotiating position of the United States.”

Subsequently, it was revealed that hotels that served as venues for the talks including the Beau-Rivage Palace in Lausanne, the Intercontinental in Geneva, the Palais Coburg in Vienna, the Hotel President Wilson in Geneva, the Hotel Bayerischer Hof in Munich and Royal Plaza Montreux had been targeted by an Israeli spy virus in order to eavesdrop on all the conversations.

It is clear that Israel did not even trust her closest ally, the U.S., whose officials normally informed her of all the details of the negotiations.

Apart from the repeated threats to attack Iran’s nuclear installations, Ehud Barak, Israel’s former defense minister and former prime minister, has revealed that at least on three occasions Israeli forces were ordered to get ready for an attack on Iranian nuclear installations. Israeli Channel 2 Television aired a recording of Barak revealing the details of those planned attacks. To this one should add repeated Israeli incitements for the U.S. to attack Iran, and U.S. officials constant refrain of “all options are on the table”.

It has become commonplace for U.S. and Israeli politicians to demonize Iran and Iranians and to refer to them in racist language. The Under Secretary of State for Political Affairs and chief U.S. negotiator Wendy Sherman declared in Congressional testimony in 2013 that Iranian leaders couldn’t be trusted because “We know that deception is part of the DNA.” Tom Donilon, a former National Security Advisor to the Obama administration, also said in 2011 that Iran had “a record of deceit and deception.”

In order to see how ugly and insulting such remarks are, it is enough to replace “Iranians” with “Jews” or “Americans” to see how offensive they sound. Many Republican senators and presidential candidates have even used much more disgusting language referring to Iranians. It is sad to note that even President Obama in his meeting with Jewish leaders felt it necessary to say: “And I keep on emphasizing we don’t trust Iran. Iran is antagonistic to the U.S. It is anti-Semitic. It has denied the Holocaust. It has called for the destruction of Israel.”

These are just a few examples of the many red lines and Rubicons that have been crossed with total impunity. Instead of condemning those illegal and criminal activities by Israel, American officials have collaborated with them in these outrageous acts.