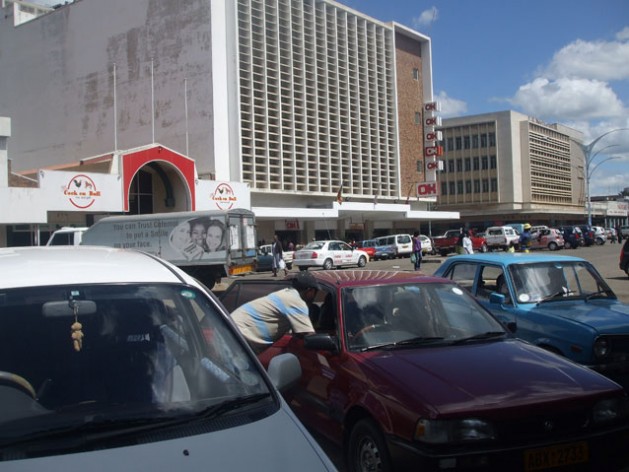 Despite full supermarket shelves like this one in Zimbabwe's second city, very few can afford basic commodities as the country struggles to reduce hunger and poverty. Photo Credit: Ignatius Banda/IPS

BULAWAYO, Zimbabwe, Nov 27 2015 (IPS) - Noel Bhizori has a permanent post at a traffic light in Bulawayo’s central business district where he sells mobile phone recharge cards at a busy intersection.

“The profits are little but then this is the only means to earn a living I know,” Bhizori told IPS.

“I eat one meal a day, a plate of isitshwala (a staple of thick maize meal-based porridge) which costs a dollar. With my kind of earnings, this is what I can afford,” he said.

Bhizori makes less than 200 dollars a month, but still has to deduct 70 dollars per month for a room rental in one of the city’s sprawling poor working class townships.

He also has to pay anything between15 and 25 dollars for electricity and water.

His grim circumstances present an off the radar reality of millions in urban areas previously thought to be better off than the traditionally poor most seen in rural areas.

Recent statistics from the Zimbabwe Statistics Agency (ZimStat)’s October national datum lines showed that the average Zimbabwean lives on 3.24 dollars per day which is more than the World Bank’s 1.90 dollars, an indicator of extreme poverty.

However, as Bhizori explains, continuing price increases of basic commodities have meant he and fellow city vendors easily fall within the extreme poverty bracket. “We are only happy when there are supermarket specials when prices are reduced but it’s still money we do not have,” Bhizori told IPS.

In its October consumer index, the Consumer Council of Zimbabwe (CCZ), a quasi-government agency found that an average family of six required 561 dollars per month, which means each family member requires 93.3 dollars per month or 3.1 dollars per day.

According to ZimStat at least 72 per cent of Zimbabweans live below the official poverty datum, which could create a huge task for the country to meet its Sustainable Development Goals (SDGs) towards reducing poverty and hunger.

And as the cost of basic commodities continues to spike, the per centage of Zimbabweans needing aid is likely to increase with it at a time when the United Nations Development Programme’s Human Development Index put Zimbabwe at number 156 of the least developed countries out of 187.

In September this year, the World Food Programme (WFP) said that 2.2 million Zimbabweans will require food assistance this year.

Aid agencies are increasing their presence across the country’s rural areas to address hunger and poverty, a clear sign that government will need partners to meet its SDGs despite long-held accusations that nongovernmental work to undermine the government.

Writing in September this year, UN Resident Representative in Zimbabwe Bishow Parajuli said that Zimbabwe will require assistance from international development partners to meet its SGDs, noting that this “success will be driven by the government and the people of Zimbabwe.”

In August, World Vision International, in partnership with the UK’s Department for International Development (DfID) launched the Responding to Drought and Protecting Livelihoods Programme in Zimbabwe, while the WFP reports that only 11 per cent of children aged between 6 and 11 months have access to the minimum nutritional diet.

“We are assisting with cash vouchers for food assistance in Matebeleland North and Mateleleland South provinces,” said Khumbulani Ndlovu, a director at World Vision International.

DfID is providing 15 million pounds for the programme in what the aid agency says is increasing food insecurity across 16 rural districts.

It is these rural populations now getting food assistance who previously added grain to the national food reserves but have seen maize production dwindling because of challenges that range from climate shifts to lack of farming inputs.

Education officials say thousands of primary school children in Matebeleland North and South provinces who subsisted on domestic food stocks have dropped out of classes this term because of hunger.

According to the WFP, the country’s 2014/15 agriculture season saw a 51 per cent decline in maize production compared to the previous season, further exacerbating poverty and hunger levels in the country.

This month, a new World Bank report issued the grim warning that climate change could add up to 100 million poor people by 2030, the SDGs cut-off year, which is not good news for Zimbabwe as it is one of many African countries on the receiving end of radical climatic shifts.

Amidst all these challenges, Tapiwa Gomo, a researcher at the United Nations Office for the Coordination of Humanitarian Affairs said, like any other country, Zimbabwe will require political commitment to address hunger and poverty if it is to meet its SDG targets.

“Zimbabwe is blessed with vast amounts of natural resources to get itself out of poverty and achieve the SDG to reduce poverty, but there is no amount of policies that can cause development to flourish in a context dominated by politics,” he said.

Meanwhile, for Bhizori and thousands of vendors across Zimbabwe’s second city, hunger and poverty remain an everyday reality that will test the country’s ability to address its SDGs.