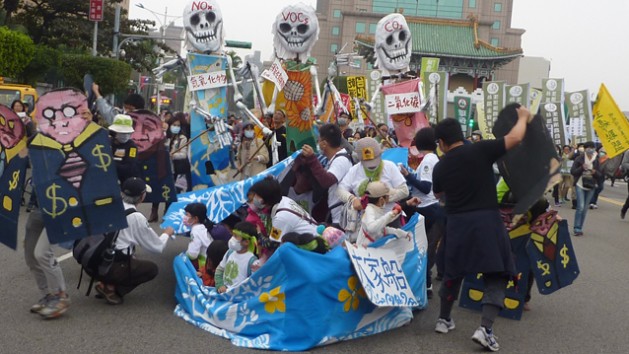 "We are all in the same boat," reads a placard in a protest held by Taiwan environmentalists to call for action to reduce air pollution as well as ending nuclear power held in front of the Office of the President in Taipei December 26. Credit: Dennis Engbarth/IPS

TAIPEI, Jan 13 2016 (IPS) - Taiwan may soon be the first nation in Asia to resolve to become a nuclear free nation after four decades of reliance on nuclear power.

Tsai, a former Vice Premier with a doctorate from the London School of Economics, has a hefty lead in the campaign, and is publically committed to turning Taiwan into a “nuclear free homeland” by 2025 phasing out the nation`s three 1970s-era nuclear power plants operated by the state-owned Taiwan Power Co.

After 38 years of martial law imposed by the KMT was lifted in July 1987, civic opposition to nuclear power surfaced, focusing especially on the construction of a fourth nuclear plant in Gungliao Township on Taiwan’s northeastern coast. It features two 1,350-megawatt advanced boiling water reactor (ABWR) units designed by GE and Toshiba. 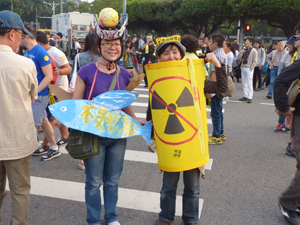 “We don`t want nuclear waste,” say two Taiwanese women during a demonstration against nuclear power in Taipei on March 8, 2015. The flying fish and nuclear waste barrel refer to the “low-level” radioactive waste disposal facility set up in 1984 by the state-run Taiwan Power Co on Lanyu (Orchid Island) off Taiwan`s southeast coast that is opposed by the island`s indigenous Dawu people. Credit: Dennis Engbarth/IPS

Taiwan’s continued use of nuclear power reemerged as a critical political issue after the March 2011 Fukushima Daiichi nuclear power plant disaster in Japan.

Despite the shock, Ma said “Progress toward phasing out nuclear power could take place only under conditions of “no limitations on electricity supply, no increases in power prices, and fulfillment of international commitments to reduce carbon emissions.”

Ma proposed that the three aging plants could be retired if the fourth nuclear power plant, whose construction costs ballooned to 10 billion dollars, was allowed to begin commercial operation.

On the other hand, Tsai aims to achieve the “nuclear-free homeland” goal by May 2025 through retiring the operating three plants on the current schedule and not starting up the fourth, which the KMT government finally decided to mothball in April 2014. That decision followed in the wake of street protests and a hunger strike by septuagenarian social activist Lin I-hsiung, who led a three-decade long campaign for a referendum on the project.

Tsai may gain the parliamentary clout to implement her policy if, as is widely expected, the ruling KMT loses its control over the 113-seat Legislative Yuan, Taiwan`s parliament, for the first time since forces of the late KMT autocrat Chiang Kai-shek occupied Taiwan in late 1945.

Lin recalled that the attempt by former DPP President Chen Shui-bien to halt construction of Nuclear Four in October 2000 had been overruled by the KMT legislative majority.

“If the DPP had a legislative majority in 2000, the controversy over Nuclear Four would not have continued to burn to this day,” declared Tsai in an election rally in Kaohsiung City January 9. 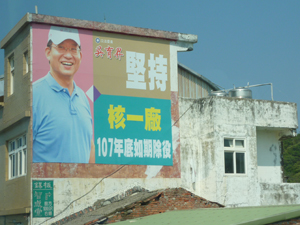 “Wu Yu-sheng insists that Nulcear One must be decommissioned on schedule by the end of 2018,” proclaims a billboard in Chinshan, Taiwan, even though Wu is a legislator for the pro-nuclear ruling Chinese Nationalist Party (Kuomintang or KMT). Credit: Dennis Engbarth/IPS

“The KMT is fond of stating that nuclear energy is cheap, but this is a lie,” Tsai declared on January 8, adding that “when the cost of dealing with nuclear waste and the risk of nuclear safety are
calculated, nuclear power is definitely not cheap.”

“It is impossible to guarantee 100 per cent safe operation any of our nuclear power plants, but Taiwan would be devastated by any major nuclear accident and cannot afford to bear any such risk,” she told IPS.

The process of ending Taiwan`s dependency on nuclear power “will be painful, but a short-term pain is better than sleeping next to a ticking time bomb,” said Shieh Jyh-cherng, former Executive Director of a national earthquake relief foundation formed in the wake of a devastating temblor that hit Taiwan on September 21, 1999.

But public opinion is clearly on the side of the “nuclear free” advocates.

An opinion poll of 1,071 Taiwan adults (i.e. over 20 years of age) released December 16 by the Risk Society and Policy Research Center of National Taiwan University showed that nearly 79 per cent of respondents supported using alternative energy sources to reduce greenhouse gas emissions and 59 per cent opposed the use of nuclear power to curb carbon emissions, with only 38 per cent backing the nuclear option.

Moreover, the poll indicated that 85 per cent are willing to pay higher electricity prices for renewable energy.

She contended that “Policies such as revamping housing codes to require energy saving methods, promoting citizen power by revamping the Electricity Act to permit community and even getting citizens to generate power and active promotion of smart grids and meters,” could result in sufficient power.”

“Taipower denies that there is much room for expansion of renewable energy because they are addicted to a mentality of centralization and big projects and do not understand how to foster renewables based on their dispersed logic,” Kao stated.

However, Tsai has repeatedly reaffirmed the DPP`s opposition to proposals by Taipower, also advocated by Chu, to send spent nuclear fuel abroad, probably to France, for reprocessing.

Securing such cooperation “will be easier if there is a national consensus to refrain from extending the operation of the existing nuclear power plants and therefore not create more spent fuel waste,” National Taiwan University Professor of Geology, Chen Wen-shan told IPS.