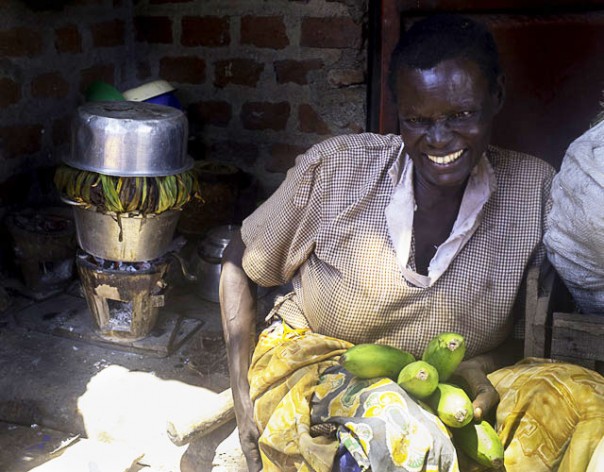 Anna Gamusi is a banana and plantain grower on the outskirts of Kampala, Uganda. Anna has only recently started using pesticides after discovering worms affecting her crop. Credit: Palwesha Yusaf/IPS

Kampala / New York, Mar 7 2016 (IPS) - Anna Gamusi, has been growing ‘matooke’ – plantains – for over 20 years. She originally learnt how to grow them in her home village of Busolwe in Eastern Uganda, but says that they are no longer grown there.

“I learnt how to plant matooke in my village, Busolwe in Butaleja district, but now there is nothing, no matooke in Busolwe,” she said. “Now we grow mostly cassava, sorghum millet and rice.” Gamusi said that the soil doesn’t support the growth of the matooke anymore.

“The soil has been exhausted, you need virgin land, very fertile soil and a lot of fertilizer, manure, to grow matooke, but now the soil has gotten tired,” she said.

She says that she has also recently had problems with her own matooke crops in Kampala, where she now lives. A worm has begun to affect the roots and make the fruit inedible, she says.

“(The worms) did not used to be there before, it is a recent thing,” she said, “it affects all types of plantain.”

These soil borne worms — or nematodes — are one of three types of diseases affecting plantains, Rony Swennen, who leads banana and plantain breeding in Africa for the International Institute of Tropical Agriculture (IITA), told IPS.

Plantains, an important staple in Uganda, as well as through much of the tropical world, are susceptible to the same diseases currently threatening the world’s most popular banana the Cavendish.

“120 plantain varieties they all suffer from the same susceptibility to black sigatoka, nematodes and weevils, like the cavendish, so there’s no variation in response to the disease except that they are all extremely susceptible”, he said.

IITA have developed new hybrid varieties which are resistant to the common diseases effecting plantains, says Swennen, yet further research may also help to identify ways to protect the 120 varieties of plantains which remain susceptible.

“If you have the plantains growing around the houses so the small backyards they are suffering far less than when they are in the fields,” said Swennen.

“Possibly there is a nutrition content in the soil of the very rich back gardens which we have not properly understood,” he said.

The fruit, which is closely related to bananas, is an important source of starch and calories, and is also very rich in vitamin A.

Protecting the plantains is important because they help to fill the hunger gap in the off-season when other crops have already been harvested, says Swennen.

Unlike other crops plantains can be grown year round, they also have many other benefits for farmers, said Swennen, they are cheaper to grow “than any other crop in Africa”, and they also provide valuable shade for other crops.

“They create a micro-environment and therefore they allow the other crops to come into the farm,” he said.

The new varieties also address another important concern of farmers, the ability to grow plantains year in year out in the same field.

As Gamusi said, it has become difficult to grow plantains in her village because the fields become tired from the traditional crops, which are not perennial.

Swennen says that feedback from farmers has shown that they value perennial behaviour, and the ability to produce more plantains in a given period of time, over increasing crop yields.

The new hybrid varieties developed by IITA are perennial so they don’t need to be replanted each year, he says.

“The new plantain varieties also have very good ratooning, which leads to a faster crop cycling, meaning that farmers can produce more plantains in a given period of time,” he added.

The new hybrids were developed in Nigeria and have proved popular, and are even being trialled in the Caribbean and Colombia.

Researchers at the University of Agriculture in Nigeria say that plantains are eaten in many different ways, including as fried chips. They are also boiled, baked, pounded, roasted or sliced and turned into beer and baby food.

Gamusi says that it is now popular to fry or boil the plantains and eat them with groundnut sauce. Traditionally, she says the plantains were wrapped and steamed. “This is the traditional way to cook it called okusanika emere,” she says.