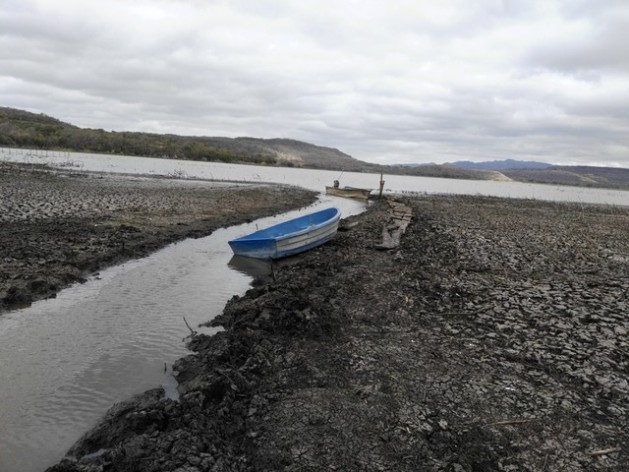 Boats stranded on the dry bed of Moyúa lake in northern Nicaragua, which has lost 60 percent of its water due to the severe drought plaguing the country since 2014. Credit: Courtesy of Rezayé Álvarez

MANAGUA, Apr 5 2016 (IPS) - A three-year drought, added to massive deforestation in the past few decades, has dried up most of Nicaragua’s water sources and has led to an increasingly severe water supply crisis.

Since January, photos and videos showing dried-up streams, rivers and lakes have been all over the social networks, local news media, blogs and online bulletins of environmental organisations.

Jaime Incer, a former minister of the environment and natural resources and the president of the Nicaraguan Foundation for Sustainable Development (Fundenic-SOS), is one of the loudest voices warning about the accelerated environmental deterioration in the country.

Incer told IPS that by late March the country had lost 60 percent of its surface water sources and up to 50 percent of its underground sources, which either dried up or have been polluted.

To illustrate, he cited the disappearance of at least 100 rivers and their tributaries in Nicaragua, and the contamination of Tiscapa and Nejapa lakes near Managua, as well as lake Venecia in the western coastal department of Masaya and lake Moyúa in the northern department of Matagalpa.

The scientist said the country’s largest bodies of water are also in danger: the 680-km Coco river, the longest in Central America, which forms the northern border with Honduras, is now completely dry for several stretches of up to eight km in length.

The water level in the river is at a record low, to the extent that it can be crossed by foot, with the water only ankle-deep.

And because of the low water level in the country’s other big river, the San Juan, along the southern border with Costa Rica, large sand banks now block the passage of boats, despite the dredging operations carried out in the last few years.

In addition, the 8,624-sq-km Lake Nicaragua or Cocibolca, the biggest freshwater reserve in Central America has suffered from serious water losses since 2012, which means docks and piers have been left high and dry, said Incer.

The same thing is happening in the country’s other large lake, Xolotlán, in Managua.

Although clean-up operations in the lake were launched in 2009, the results of these efforts have not been announced. But what is clearly visible is that since the drought began in 2014, the shoreline has receded up to 200 metres in some areas, according to reports by Fundenic-SOS. 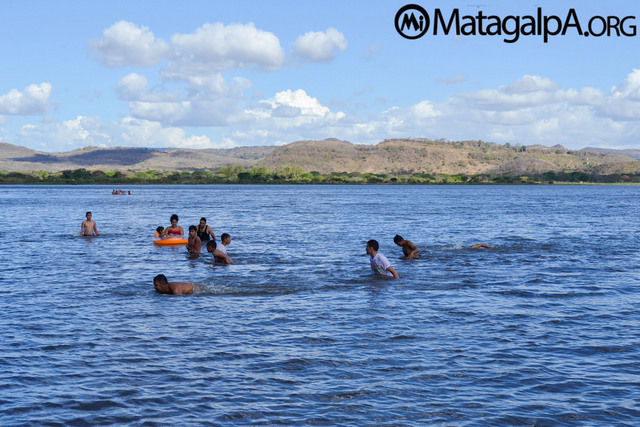 This is what Lake Moyúa in northern Nicaragua looked like before it lost 60 percent of its water due to the effects of the El Niño climate phenomenon, which in this Central American country has spelled drought. Credit: Matagalpa.org

The environmental organisation does not only blame the crisis on the impact of climate change that has been felt in Nicaragua since 2014 due to the El Niño-Southern Oscillation (ENSO) – a cyclical climate phenomenon that affects weather patterns around the world – but also the lack of public policies to curb the rampant deforestation.

The big forest reserves in the south of the country have shrunk up to 40 percent, according to a study by the British consultancy Environmental Resources Management (ERM), hired by the Chinese consortium HKND Group to carry out feasibility studies for the canal it is to build that will link the Pacific and Atlantic oceans across Nicaragua.

The environmental deterioration of the Indio Maíz Biological Reserve and the Cerro Silva and Punta Gorda nature reserves in southeast Nicaragua was worse in the period 2009-2011 than in the previous 26 years, the ERM reported in 2015.

The study says that between 1983 and 2011, “nearly 40 percent of the natural land cover in southeast Nicaragua was lost.”

The impact of the drought has been felt in the economy and the food security of a large part of this country’s population of 6.2 million people, 2.5 million of whom live on less than two dollars a day and 20 percent of whom are undernourished, according to statistics from international bodies.

Organisations of farmers, stockbreeders and tourism businesses have complained about economic damages caused by water shortages.

For example, the National Livestock Commission of Nicaragua (CONAGAN) confirmed in February that the sector is extremely concerned about the scarcity of water in the parts of Nicaragua that account for at least 30 percent of the country’s livestock.

What worries them the most is that according to international and national weather reports, the drought caused by El Niño could last through August, when the first rainfall in 2016 is forecast.

And this month, the Union of Agricultural Producers in Nicaragua (UPANIC) estimated losses caused by the drought at 200 million dollars in 2015.

Sociologist Cirilo Otero, the director of the Centre of Environmental Policy Initiatives, said the part of the country hit hardest by water shortages is the so-called “dry corridor” – a long, arid stretch of dry forest where 35 of the country’s 153 municipalities are located.

According to Otero’s studies, the impact of the drought and the lack of water in that region, which stretches from northern to south-central Nicaragua, has been so heavy that 100 percent of the crops have been lost and 90 percent of the water sources have dried up.

“The measures adopted by the government are ‘asistencialistas’ (band-aid or short-term in nature) – water and food are distributed on certain days – but there are no public policies to curb deforestation in the pine forests in the mountains of Dipilto and Jalapa, and that is one of the main causes of the disappearance of rivers and wells,” Otero told IPS.

He said children and the elderly are suffering the worst food insecurity in the dry corridor.

“There are entire families who have nothing but corn and salt to eat. The situation is very serious,” said Otero.

The government, which has been the target of complaints for failing to declare a national emergency for the drought, has continued to assist families in the area, providing them with medicine, food and water.

Ervin Barreda, president of ENACAL, Nicaragua’s water and sanitation utility, said they send some 65 tanker trucks a day to the most critical areas, supplying some 2,000 families every day.

According to official data, in February 2016 there were 51,527 families in 34 localities who depended on highly vulnerable aquifers for their water supply.