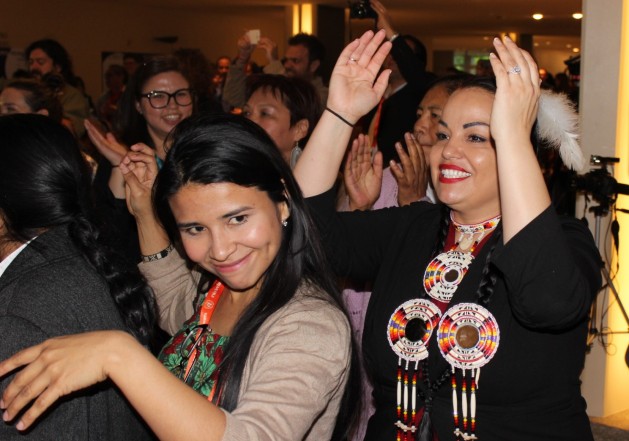 Guests at an indigenous cultural event during the Permanent Forum on Indigenous Issues. Credit: Aruna Dutt/IPS.

UNITED NATIONS, May 20 2016 (IPS) - The United Nations Indigenous Forum is one of the UN’s most culturally diverse bodies yet its inclusion within the overall UN system remains limited.

“Thousands of people who come to the forum throughout the years do not have the opportunity to express their concerns,” said Alvaro Esteban Pop Ac, Chair of the Permanent Forum on Indigenous Issues, here Thursday.

Over 1,000 Indigenous people from all over the world came here for the 15th session of the  Permanent Forum on Indigenous Issues (UNPFII) held from May 9-20.

“The demand by indigenous peoples is to have a new category as observer,” said Joan Carling, Member of the Permanent Forum on Indigenous Issues.

Carling said that while indigenous people are not states or NGOs, according to the UN Declaration on the Rights of Indigenous Peoples, they “have the right to self-determination.”

“The main aim of the resolution is to really ensure that effective participation of indigenous peoples is afforded in the UN system.”

“We need to be able to participate in decision-making processes in the UN  to be able to express our specific conditions and our aspirations as peoples. That deserves the space at the highest level,” she said.

The contributions that Indigenous peoples are making, to areas such as peace and environmental protection, are not reflected in their level of participation at the UN.

“The issue of conflicts and the issue of injustice will continue because decisions are being undertaken at global level where we don’t have any participation, that is the thing that we want to rectify,” she added.

Carling, an indigenous activist from Cordillera in the Philippines, said that the situation of Indigenous women in particular should be addressed by the 15-member UN Security Council, arguably the most powerful organ within the UN system.

Violence against Indigenous women was a major theme of the 2016 forum.

Throughout history, Pop Ac said, “Indigenous women have lead indigenous dialogue. Women play a key role in keeping the community together. We promote our issues through women,” said Pop Ac.

He pointed to Northeast India, where there is a heavy presence of more than 70 armed groups and 500, 000 military troops, which have been related to the rampant sexual abuse and trafficking of indigenous women.

Jacob Bryan Aki from Peace Child International-Hawaii and the Council for Native Hawaiian Advancement was one of the young Indigenous people who participated in the forum.

“We come here, we learn, and the work doesn’t stop,” said Aki.  “The two weeks we have here sets us up for the rest of the year, to go back home, to work with our family and our communities, to take the opportunities we have had here to those who do not. These messages need to be heard from youth.”

“We are the next generation of leaders and scholars,” said Aki. “It is very important for us to engage in this international level because in 10-20 years we are going to be thrust into these leadership roles and this is preparation to lead and learn how to make this world a better place for our people.”

With over 5000 different cultures and an estimated 7000 different languages, Indigenous peoples represent much of the world’s cultural diversity.

Yet despite their cultural differences Indigenous peoples – who make up five percent of the world’s overall population – have many shared experiences.

“The first criteria which defines an indigenous peoples, is a peoples that have survived colonization,” said Pop Ac.

“It is human greed which is destroying the environment.”

Indigenous peoples are the “guardians of life” and are working to protect their environments, he said.

Next year will be the 10th anniversary of the UN Declaration on the Rights of Indigenous Peoples which was established by the UN Economic and Social Council (ECOSOC).