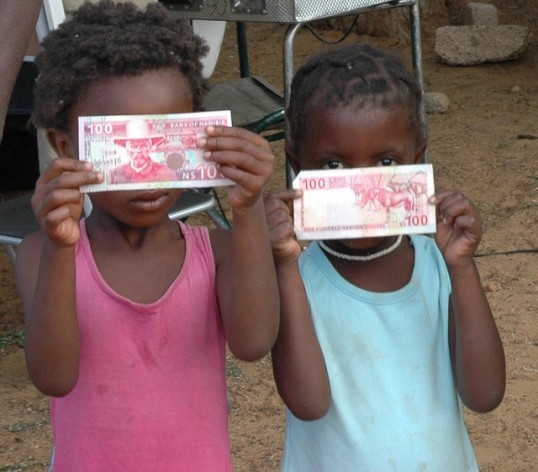 UNITED NATIONS, Jun 28 2016 (IPS) - Currently only six percent of humanitarian aid worldwide comes in the form of cash handouts, yet many aid organisations believe that cash transfers should be seen as the rule, not the exception.

Both the World Food Program (WFP) and World Vision International, who work together in Somalia, South Sudan and other crisis-ridden countries, stressed the advantages of cash instead of in kind allowances at a meeting held here Monday.

“There is no longer a question about ‘does cash work’ or ‘is cash the right tool’,” said Amir Mahmoud Abdulla, Deputy Executive director of the WFP.

“Digital humanitarian cash transfers are one of the most significant and most exciting innovations of today. They offer… a greater dignity, choice and flexibility for crisis-affected people.”

Due to increasingly widespread mobile phone ownership, cash transfers are now often made digitally. In some circumstances, including refugee camps, aid organisations may hand out cash directly.

The transfers are usually given unconditionally, since this is considered an effective way to provide assistance to a person in need. Whereas in-kind assistance such as food or materials, may not suit the specific needs of the recipient, cash transfers allow recipients to spend money on their most urgent needs, while also supporting local markets.

“Cash transfers turn notions of aid and charity on their head. Rather than the giver deciding that people need food or clothes, the choice is with the people themselves," -- Sarah Bailey.

However, while cash transfers have been considered successful in the settings where they have so far been rolled out, humanitarian organisations, such as the World Bank now want to work out how to make wider use of the concept. As Amir Abdulla put it: “How do we take it to scale?”

In order to do this, some obstacles need to be overcome, methods of delivery have to be streamlined and there has to be a response to the “need to marry cash and technology,” as Fenton puts it.

Colin Bruce, senior advisor to the World Bank President, told the meeting about upcoming challenges: “Until we can better coordinate those processes (needs assessments and response analyses), it’s going to be very difficult to get the kind of upstream thinking, funding and programming necessary to take cash to scale.”

Secondly, a “change in mindsets” has to take place, as Sarah Bailey told IPS this week. Bailey is a Research Associate at the Overseas Development Institute (ODI) and Secretariat Manager of the High Level Panel on Humanitarian Cash Transfers which produced the report Doing Cash Differently. She explained to IPS that “cash transfers turn notions of aid and charity on their head. Rather than the giver deciding that people need food or clothes, the choice is with the people themselves.”

The desired shift to cash-based aid is closely linked to the fund-raising side of humanitarian programs. Charlotte Lattimer of the non-profit research organization Development Initiatives emphasized that although funding increased in the last year, there still exists “an enormous shortfall in terms of meeting humanitarian needs”.

Donors are increasingly asking for more transparency and more precise reporting on exactly how funds are spent, which is difficult if it is spent by the recipients instead of the aid organization.

Further research may help determine whether cash transfers can provide the transparency donors ask for. With innovations in the field of digital transactions and mobile banking and payment, the infrastructure for new aid delivery concepts improves year by year.

It is this development that aid organizations hope will catch the attention of donors. Bailey explained to IPS why she is convinced that cash transfers will become more and more important. At the end of the day, financial arguments decide financial questions: “Delivering cash is cheaper than delivering in-kind aid. You do not need to rent a warehouse and hire a driver to get money to people. As aid agencies use cash more it will become even cheaper with economies of scale.”