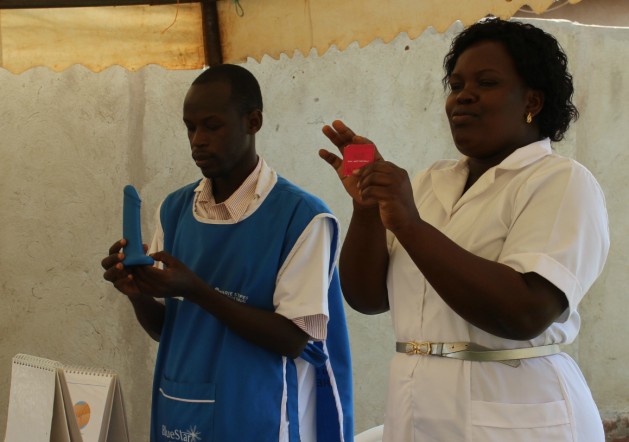 A nurse demonstrates how to use a condom at Christa Medical Clinic in Jinja, Uganda. Credit: Lyndal Rowlands/IPS.

Jinja, UGANDA, Sep 11 2016 (IPS) - Mambera Hellem tells her friends and neighbours about all forms of contraception, yet despite their high HIV risk she knows many of the women she speaks to will not use condoms.

When I ask Mambera and her friend Kyolaba Amina if it is a woman or a man who decides to wear a condom, Kyolaba giggles softly at my question. “It is not easy for a woman to initiate condom use because it will bring about questions of trust,” says Mambera. “The man would ask the wife if she does not trust him.”

Kyolaba though has deeper suspicions, adding that some men “deliberately want to infect their wives”.

“I don’t know why men do that but I have seen a case where a woman and a man had discordant (HIV) results but the man did not want to use condoms because before they were having unprotected sex, why (not) now.” 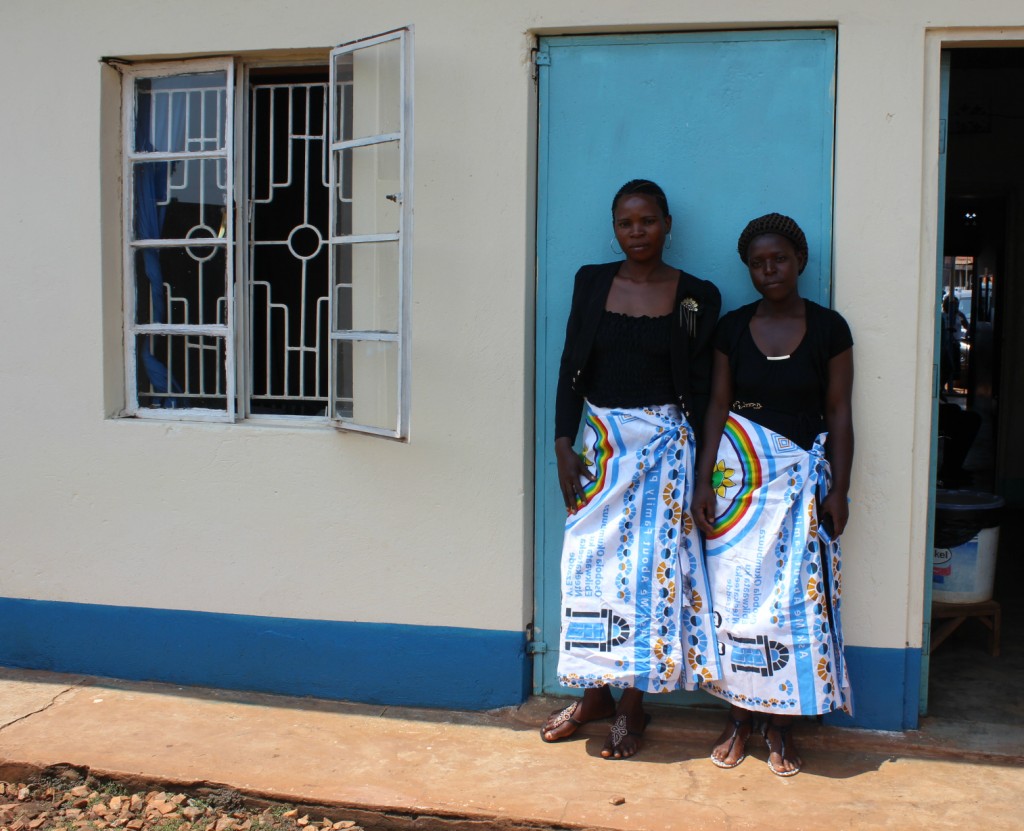 Kyolaba (left) and Mambera (right) both also speak to men about contraception, but Mambera says that most men are “not interested.”

In a country where many myths abound around contraceptives and their side effects, the most popular forms of contraception for the women in this community are depo-provera “depo” and intrauterine device (IUD) implants.

“You find many women who have children every year, so it is such women we reach out to,” says Mambera.

Some women even prefer IUDs or depo because unlike condoms they can keep them secret from their husbands, and this is not the only aspect of their sex lives which women keep secret, says Kyolaba:

“We do talk about HIV and tell the women to go for testing but many women are afraid to tell their husbands about this thing and they do secretly come for testing.”

“I have an example of my neighbour who came to the clinic and tested positive but has kept this as a secret, not told her husband, because it could lead to violence in the home,” she says.

As I speak to Mambera and Kyolaba in the backyard of the Christa clinic in Jinja, Uganda, a group of women cradling babies on their laps watch as a nurse demonstrates how to use a condom. The clinic serves a poor community near the banks of Lake Victoria and the source of the Nile river providing free and low cost family planning services.

Services such as these are patchy at best in Uganda which has one of the highest birth rates in the world: the average Ugandan women will give birth to six babies during her lifetime. 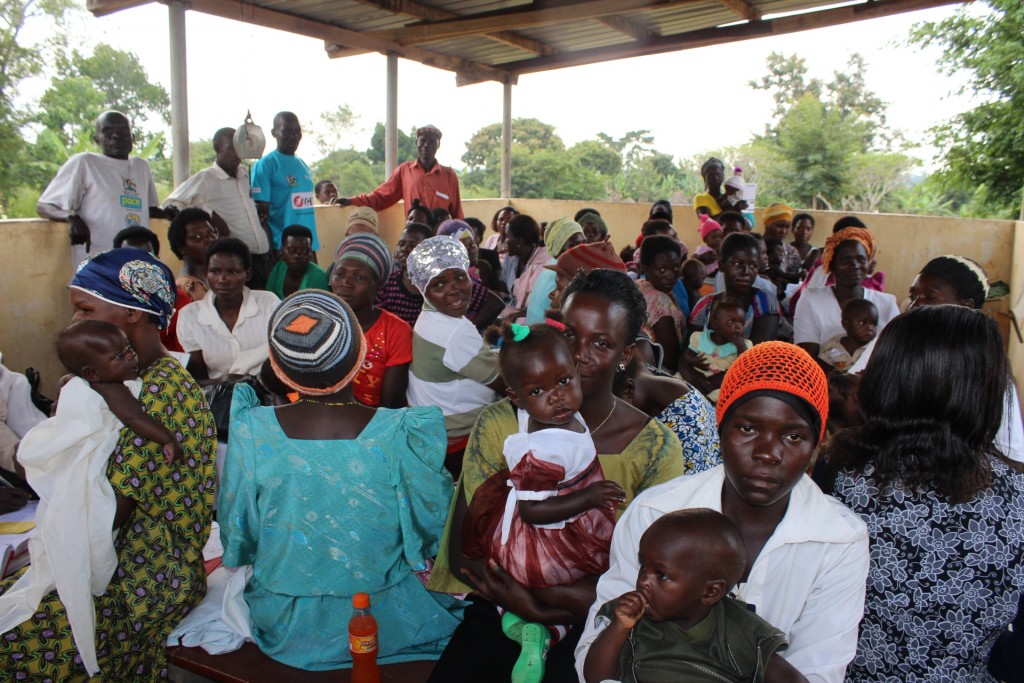 Uganda has a birth rate in the top 10 of countries worldwide. Credit: Lyndal Rowlands/IPS.

A different, more concerning, statistic has emerged in Uganda and other countries in Sub-Saharan Africa in recent years.

Young women are becoming HIV positive much younger than their male peers.

By the time she is 21, a young woman in Uganda has a one in ten chance of being HIV positive.

Without being able to influence whether their sexual partner wears a condom, these young women have little ability to protect themselves from becoming HIV positive, since condoms are the only form of contraception which also protects against sexually transmitted infections and diseases.

Dr Akinyele Eric Dairo, Officer in Charge of the UN Family Planning Agency, UNFPA, in Uganda, agrees with Mambera’s observations that women have less influence over condom use than men.

“When it comes to condom use, men have more influence than the women,” he told IPS. “Condom use brings about a sense of dependence on the part of a woman.”

Dairo adds that the preference for other forms of contraception also reflects young unmarried women’s fears of pregnancy.

“The effects of pregnancy manifest much faster than the effects of HIV and sexually transmitted infections,” he says. 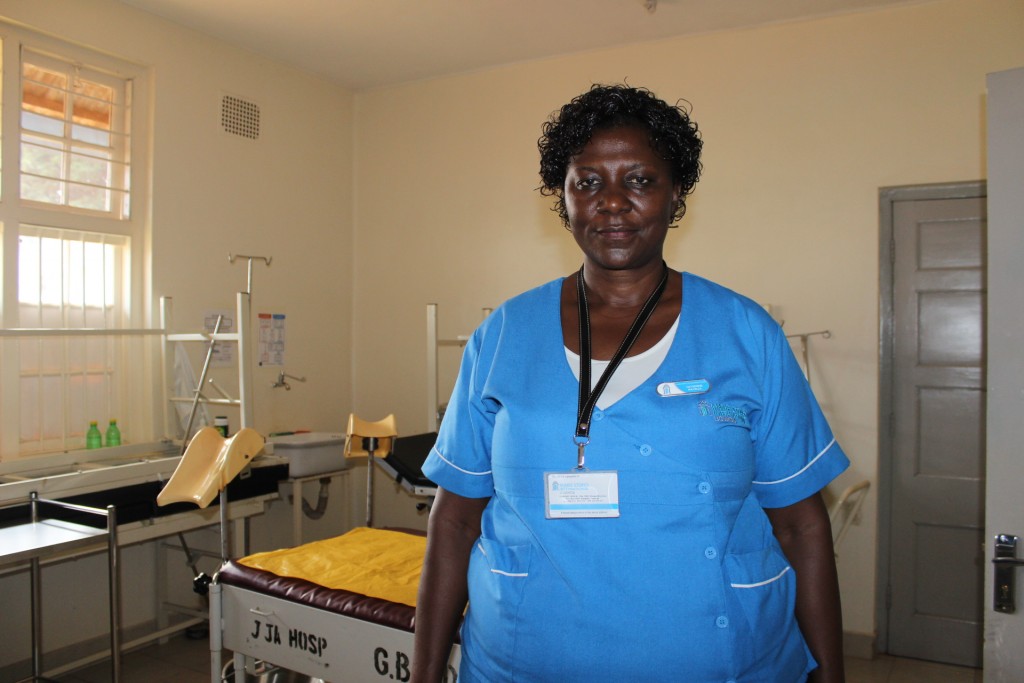 Catherine a nurse at Jinja referral hospital, likes to put herself in the shoes of her young patients. Credit: Lyndal Rowlands/IPS.

As Catherine, a nurse at Jinja hospital puts it: “The major fear is pregnancy, they don’t know that they can get other problems.”

This may in part be because access to antiretroviral treatment has greatly reduced not only the spread of HIV but also the the stigma around the disease. “People are saying that this is like being diabetic,” Catherine told me.

The increased availability of antiretrovirals has led to significant progress in the fight against AIDS in Sub-Saharan Africa, however this progress could potentially be set back if prevention efforts among a demographic as large as adolescent girls continue to fail.

This is why Loyce Maturi, a 23 year old woman from Zimbabwe who has been HIV positive since she was 16, was invited to deliver the keynote address a high level United Nations meeting on AIDS in New York earlier this year.

“Sharing my story I hope it reflected that as adolescents girls and young women we are vulnerable, at risk, most infected and affected by the epidemics than any other age group,” said Loyce.

Scribbled in the margins of a copy of her speech later shared with the media is an addition:

“There is a need for us to priorities (sic.) key populations MSM (men who have sex with men), sex workers, people who inject drugs, prisons (sic) and migrants.”

Yet while the HIV and AIDS response has focused on these high-risk groups, none of them are vulnerable simply because of their gender or age, which is why addressing the reasons why young girls have such a high rate of infection is so important.

As Dairo explains, girls are often forced into early sexual relationships and early marriage, often with much older men.

Girls are also at risk because they face violence, including sexual violence, and because they have less access to education and economic resources than their male peers, says Dairo.

This forces young girls to find older men who help them out with money for bus fares and school fees, creating a very unequal power dynamic, where it would be very unlikely a girl could decide if her partner wears a condom.

This is why, says Dairo, teaching young people how to use condoms alone is not enough, if the many gender inequalities which lead to young women’s higher risk are not also addressed.