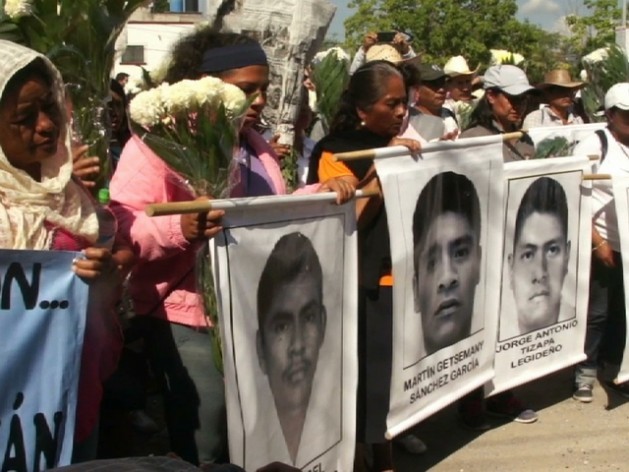 43 students were arbitrarily arrested on 26 September 2014 by local police in Guerrero state, Mexico. They haven't been seen since. Credit: Telesur / Amnesty.

MEXICO CITY, Sep 26 2016 (IPS) - There are certain events that mark a turning point in a country. The way a government decides to handle them defines the way they will go down in the history books.

This week marks two years since 43 students from a rural school in southern Mexico were forcibly disappeared after a brutal confrontation with security forces.

The unresolved tragedy has become such a stain for the administration of President Enrique Peña Nieto that it is now shorthand for the Mexican authorities’ reckless approach to human rights in the country – where those responsible for crimes such as torture, extrajudicial executions and enforced disappearances are rarely brought before the courts.

The catalogue of failures in the way the Ayotzinapa case has been handled is so long, it beggars belief.

Six months after the students were forcibly disappeared, Peña Nieto’s then Attorney General Jesús Murillo Karam came out publicly with an official explanation of what they believed had happened. In a press conference, he said the students had been killed by a powerful local drug gang and that their bodies had been burned in a dumpster.

Reports that dozens of those arrested for their involvement in the disappearances had been tortured to “confess” were never followed up.

He called it the “historic truth”.

His speech caused such havoc and indignation – particularly after a team of international forensic experts said the explanation was scientifically impossible – that Murillo Karam was effectively forced to resign. But still, neither he nor the government ever retracted his theory.

A few months later and in a bid to show action was being taken to shed some light onto the tragedy, the Mexican government agreed to allow a team of world renowned experts appointed by the Inter American Commission of Human Rights to look into the case.

But a year into their investigation, and after two damning reports pointing at a catalogue of failures by the authorities in the way the investigations had been handled, they were invited to leave the country.

The Peña Nieto administration had been embarrassed internationally and it did not like it.

Authorities promised they would take the inquiries forward, they promised justice. They said international help was no longer needed, that Mexico could take on the task of determining the students’ fate and whereabouts.

And they were right not to.

As was expected, in a country with an atrocious human rights record, progress on the Ayotzinapa investigation has reached a standstill.

As international pressure decreased and the world’s attention moved on, pressure lifted on the Peña Nieto administration.

Reports that dozens of those arrested for their involvement in the disappearances had been tortured to “confess” were never followed up.

The scandalous revelation by the group of experts that Tomas Zerón de Lucio, a public official who had been in charge of the investigation, tampered the crime scene in a bid to show a piece of bone belonging to one of the students had been found in the banks of a local river in late October 2014 has also gone unpunished. A shallow investigation into the accusation has not led to any concrete results and Zerón was moved from the Attorney General’s Office to a higher position in the Council of National Security.

The Peña Nieto administration’s barefaced denial of what happened to the Ayotzinapa students is so deep-seated the president no longer dares to utter the word in public.

And the disappearance of these 43 young men is emblematic of everything that is wrong in Mexico. Human rights are nothing but an illusion for the thousands of men, women and children who are tortured, murdered and disappeared every year and will continue to be so as long as the authorities insist on saying everything is fine.

The stories of the 43 Ayotzinapa students are a reminder of the more than 28,000 men, women and children who have vanished across Mexico over the last decade – most since Peña Nieto took office in 2012.

They are a reminder of the extent to which people are routinely tortured into “confessing” crimes they did not commit in a vile attempt to show the government is actually taking action against the brutal criminal gangs terrorizing the country.

Time and time again we have heard the stories of mothers, fathers, brothers, sisters and children of those who have simply “vanished into thin air” and have no one to turn to in their desperate search for truth and justice.

On 29 July 2016, the Inter American Commission on Human Rights approved a mechanism to follow up on the findings and recommendations of the group of experts, with the aim of determining the whereabouts of the students

But without any real support from the Mexican authorities, there is no mechanism that will shed any light onto these crimes or ensure that those responsible will face justice.

The Peña Nieto administration seems to be relying on Mexico’s short-term memory; it hopes people will forget about the 43 students and many other human rights violations this country has seen over the decades have been forgotten.

What they are not counting on is the millions across this country, and around the world, who have had enough of empty promises. We will continue to fight, side by side, with all the brave human rights defenders and organizations who are not giving up hope to hold the Mexican authorities accountable and to ensure they fulfill their international obligations to protect human rights.

The time for political maneuvers is over. The relatives of the 43 young men of Ayotzinapa will never give up their fight until truth and justice for their children is achieved.