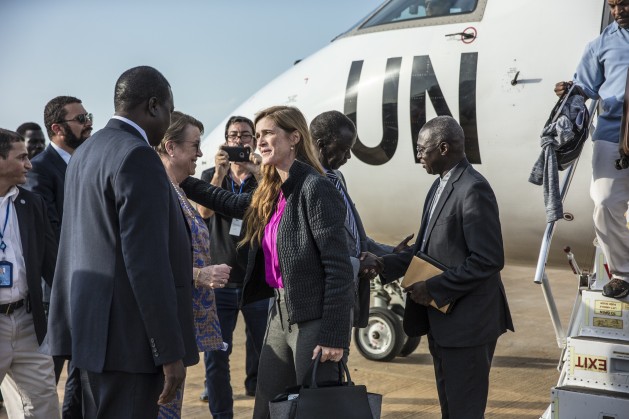 A delegation from the UN Security Council visited South Sudan at the beginning of September 2016. UN Photo/Isaac Billy.

UNITED NATIONS, Sep 28 2016 (IPS) - Nearly one month after UN Security Council members visited troubled South Sudan, disagreement reigns over even the limited outside measures proposed to try to bring the security situation in the world’s newest country under control.

“To fix South Sudan you will need 250,000 soldiers, you will need four or five billion dollars per year. Who is going to do that? Nobody.” Berouk Messfin, Senior Researcher with the Institute for Security Studies in Addis Ababa, told IPS.

While it is clear that neither an arms embargo nor an additional 4000 UN troops – two measures currently on the table – will be a panacea for troubled South Sudan, there is a slim hope that they may pressure the country’s leadership to act in the interests of its people.

For three days in early September Security Council members traveled to South Sudan. At the end of the visit a ‘joint communiqué’ was issued that seemingly brokered an agreement with the interim Transitional Government of National Unity. It outlined the strengthening of the existing 12,000-troop UN peacekeeping mission (UNMISS) through an additional 4000-troop Regional Protection Force, and the removal of restrictions to humanitarian access. But in the days since the communiqué, South Sudanese officials have insisted that specifics of the additional force remain unresolved.

“We have agreed in principle … but the details of their deployment, the countries that will contribute … that is the work that is left now,” Hussein Mar Nyuot, Minister of Humanitarian Affairs and Disaster Management for the South Sudan government told IPS. “I don’t see the difference that this [4000] will come and do.”

“To fix South Sudan you will need 250,000 soldiers, you will need four or five billion dollars per year. Who is going to do that? Nobody.” -- Berouk Messfin, Institute for Security Studies.

The proposed additional force would be under the command of UNMISS and was endorsed in July by the east African Intergovernmental Authority on Development (IGAD) body leading the South Sudan peace talks. Building on UNMISS’ existing mandate, which already calls for the “use all necessary means” to protect UN personnel and civilians from threats, the Security Council believes the additional troops would strengthen the security situation.

The force is to be deployed as soon as possible, Hervé Ladsous, Under Secretary General for UN Peacekeeping Operations, told reporters Friday. Though he also said they were trying to elucidate “contradictory statements” from the capital, Juba.

In this context, human rights advocacy groups, along with UN Secretary General Ban Ki-moon, have continued their calls for the UN Security Council to impose an arms embargo to stop both sides’ continued militarization.

“It’s going to be more difficult for parties to the conflict to get access to ammunition and supplies,” Louis Charbonneau, UN Director for Human Rights Watch, told IPS. “Combine it with the boosting of UNMISS … [and] it’s going to make a difference for civilians.”

However, the South Sudanese government, whose soldiers have been implicated in ethnically motivated killings, rape, and looting, disagrees on the value of an embargo.

If they say they want to have [an] arms embargo, ok, but what will you do with the arms that are in the hands of the people?” he continued. “We should encourage the government to disarm the civilian population.” 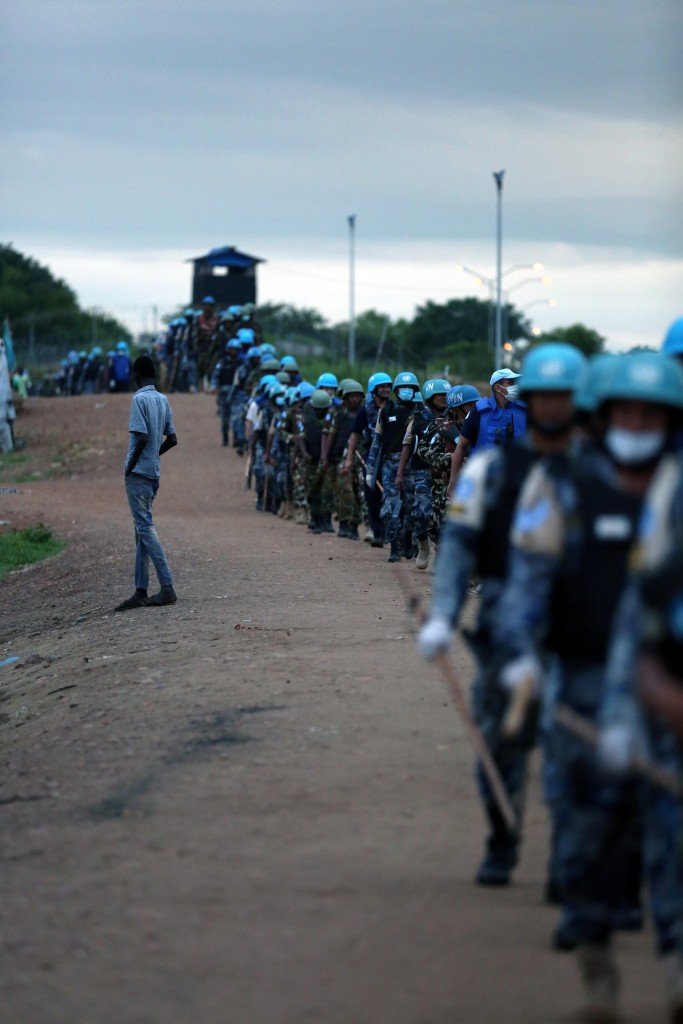 As a party to the conflict, South Sudan’s government is not impartial in their position, however they are also not entirely alone in their hesitance. “[An embargo] has to be a last course … we are not there yet,” Mahboub Maalim, Executive Secretary of IGAD, told IPS.

Despite the existing arms in the country and the potential for continued illicit inflows, targeted sanctions by the Security Council may signal deeper commitment to ending the violence and protecting civilians. Nevertheless, neither an embargo nor 4000 additional troops will cure the political divisions among South Sudan’s leadership, which lie at the heart of the conflict.

“The South Sudanese have a string to hang on now … and that is the implementation of the [August 2015] agreement,” Maalim said. “It has had some problems because of the July incident, but it’s going to come on track,” he added referring to violent clashes which took place in South Sudan in July, bringing the country to the brink of all-out war.

However, not everyone agrees on the viability of the previous agreement.

“You have two sides that are not negotiating in good faith … who do not understand how to implement peace agreements they have signed,” said Messfin.

So what is to be done? Beyond the intended value for the protection of civilians, additional troops and restrictions will only go so far without political commitment from the country’s leadership.

Conflict prevention in South Sudan is about strategically applied political leverage, Cedric de Conning, Senior Researcher at the African Centre for the Constructive Resolution of Disputes and the Norwegian Institute of International Affairs, explained to IPS.

A protection force like a reinforced peacekeeping mission can only implement what is agreed to politically, and the warring parties are not committed and remain mistrustful. While immediate action is necessary to save lives, there will eventually need to be a “reset” and a new administration, he continued.

“There has been a steady uptick in press freedom violations in South Sudan in recent months,” Murithi Mutiga, East Africa correspondent for the Committee to Protect Journalists (CPJ), told IPS. “We have seen a number of cases of newspaper outlets being arbitrarily closed down, the most prominent cases being the Nation Mirror and the Juba Monitor.”

Press freedom can support the pursuit of a sustained cessation of hostilities, urged CPJ, because accurate and accessible public information allows citizens to better understand how to react to crises without turning to violence. A well-informed population may also be better positioned to define a peaceful future for their country.

The importance of uninhibited civil society for conflict prevention also matches the priorities outlined in two identical resolutions passed by the UN Security Council and General Assembly in April, which recognize pathways to “sustaining peace.” Notably, this includes the development and maintenance of social, political and economic conditions necessary for conflict to be prevented.

South Sudan has experienced persistent violence since 2013, when armed conflict broke out between groups loyal to president Salva Kiir and opposition leader in exile Riek Machar. Fighting escalated along ethnic lines, pitting Dinka against Nuer, until a peace agreement was signed in August 2015. But fighting continued and escalated in July 2016 with a series of clashes in Juba, which left approximately 300 dead. Over the last three years thousands have been killed, over 1.6 million people remain internally displaced, and roughly 4.8 million currently suffer from food insecurity, according to the UN.

While the implementation of September’s joint communiqué will be reviewed with next steps considered at the end of the month, South Sudan’s Humanitarian Response Plan is severely under-funded at just over 50 percent; despite there being no doubt that South Sudan needs immediate assistance.

But this will only serve as a stop-gap against man-made famine. While the Security Council may still unite for the application of an embargo, the fate of South Sudan ultimately lies with its leadership. Their ability to find a lasting agreement, with support from the UN, the African Union, and IGAD, hinges on their willingness to stop the conflict.

“The lives and future of an entire generation hang in the balance,” Anthony Lake, Executive Director of UNICEF, said Thursday. “Literally the future of South Sudan.”