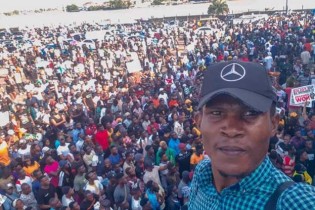 By Jonathan Rozen
Spyware’s repeated use to target journalists and those close to them poses an existential threat to the privacy required for press freedom to flourish. Without the ability to privately communicate with sources, conduct research, and compile information, journalists are hampered in their ability to keep the public informed and hold the powerful to account.

By Jonathan Rozen
In May 2019, senior members of Ghana’s law enforcement posed for photos with the U.S. ambassador to their country at a ceremony in the capital, Accra. Between them they held boxes and bags, gifts from the U.S. government to Ghana which, according to one of the recipients, contained Israeli phone hacking technology.

By Jonathan Rozen
Hamza Idris, an editor with the Nigerian Daily Trust, was at the newspaper’s central office on January 6 when the military arrived looking for him.

By Jonathan Rozen
When Nigeria's incumbent president Muhammadu Buhari won re-election this year, he campaigned (as he did in 2015) on an image of good governance and anti-corruption. Billboards in the capital, Abuja, bore the smiling faces of the president--who first led Nigeria as military ruler from 1983-1985--and his vice-president Yemi Osinbajo, and called for voters to let them "continue" their work and take the country to the "Next Level."

By Jonathan Rozen
A ceasefire agreement signed on December 21 between the South Sudanese government and opposition forces has revived a 2015 peace process and brought hope that the conflict will not persist into its fifth year.

By Muthoki Mumo and Jonathan Rozen
On January 10, radio journalists Darsema Sori and Khalid Mohammed were released from prison after serving lengthy sentences related to their work at the Ethiopian faith-based station Radio Bilal. Despite their release and Prime Minister Hailemariam Desalegn's promise earlier this month to free political prisoners, Ethiopia's use of imprisonment, harassment, and surveillance means that the country continues to be a hostile environment for journalists.

By Jonathan Rozen
“The internet for journalism is now like the air you breathe,” said Befeqadu Hailu, an Ethiopian journalist and a member of the Zone 9 blogger collective who was arrested in April 2014 and charged with terrorism. “Without the internet, modern journalism means nothing.” Yet, the internet is something that journalists in multiple African countries are often forced to do without.

By Jonathan Rozen
It plays like a Hollywood movie. A former member of the Syrian military police, later codenamed “Caesar”, smuggles digital memory sticks containing photographs of corpses displaying signs of severe torture and starvation -- in his shoe. That was between September 2011 and August 2013. But now comes the question of accountability.

By Jonathan Rozen
Youth represent 40 percent of the African continent’s population. This number is expected to rise over the next 20 years and represents the population bearing the brunt of African economies’ failure to create sufficient jobs and address poor economic management.
Next Page »
ADVERTISEMENT ADVERTISEMENT