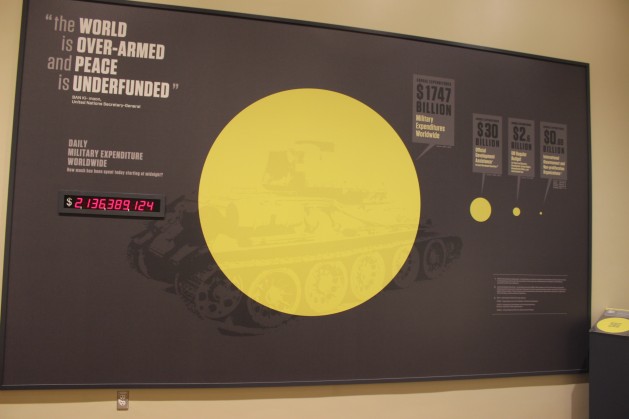 UNITED NATIONS, Oct 3 2016 (IPS) - As the world struggles to respond to conflicts and the people fleeing them, UN insiders are also struggling to advance a ‘shift in mindset’ to help prevent these crises from happening in the first place.

“Part of the challenge is the way we have characterised the work of the UN as one of a first responder, fire-fighter, as an organisation that comes in when things fall apart,” Macharia Kamau, Permanent Representative of Kenya to the UN, told IPS. “As a consequence all of the institutions in the UN tend to be more reactive than preventive.”

To change this, a group of diplomats and UN staff are seeking to bolster the UN Peacebuilding Fund. This fund operates with an annual budget of roughly 100 million dollars, making small yet targeted investments to avert crises over the long-term.

“Conflicts are pushing UN system to its limits,” said UN Secretary General Ban Ki-moon. “Without the Peacebuilding Fund, we will be forced to stand by as we witness the preventable loss of countless lives.” But the fund is dramatically under financed.

On September 21, the UN Peacebuilding Fund held a pledging conference for the fund’s continued operation. The contributions of 30 countries, however, only amounted to 152 million dollars – just over half of the 300 million dollar funding target.

“The rhetoric that we have on peacebuilding is way ahead of the willingness to face up to the challenges of delivering on peace,” said Kamau, who also serves as the Peacebuilding Commission chairperson. “Something fundamentally different needs to happen.”

This year’s budget for the UN’s 16 Peacekeeping missions is roughly eight billion dollars. Looking ahead, small investments by the UN Peacebuilding Fund could save money by preventing the need for expensive missions that respond to what are often already dire circumstances, argue proponents of peacebuilding.

But improved foresight and proactive investments may also have impacts beyond countries’ chequebooks.

As the international body with the mandate to “save succeeding generations from the scourge of war,” the UN’s credibility rests largely on its ability to prevent and resolve conflict.

“If we are able to stop these conflicts from emerging in the first place, much of what we see today in the refugee situation putting a lot of pressure on individuals and countries would of course not have happened in the first place,” said Olof Skoog, Permanent Representative of Sweden to the UN.

The UN Peacebuilding commission is a relatively new arm of the UN, established only in December 2005. Its mandate widened in April this year with the adoption of two identical resolutions by the UN General Assembly and Security Council. These moved peacebuilding responsibilities beyond post-conflict recovery to include comprehensive efforts for more proactive conflict prevention and ‘sustaining peace.’

Sustaining peace is the “idea that this process of prevention is actually something that goes on from the early warnings … over the conflict stage … and the post-conflict,” Jan Eliasson, UN Deputy Secretary-General, told the Peacebuilding Fund pledging conference. It involves consideration for the whole range of social, political, and economic factors that may contribute to peace.

This links conflict prevention to the achievement of the Post-2015 Sustainable Development Goals (Agenda 2030). For example, Goal 1 and Goal 10 – “No Poverty” and “Reduced Inequalities” – will not be possible without sustained peace.

According to the World Bank, the world’s poorest people are becoming increasingly concentrated in fragile areas affected by conflict and violence, as peaceful areas reap the benefits of development. By 2030, 46 percent of people in extreme poverty will live in fragile and conflict affected areas, up from 17 percent today, says the Bank.

“We are still in early days to say what [Agenda 2030] will look like in terms of implementation,” Helder da Costa, General Secretary of the g7+ association of developing countries affected by conflict, told IPS after a meeting on Goal 16. “If you really want to build peaceful societies … we need practical implementation on the ground.”

One of the Peacebuilding Fund’s investments provided two million dollars to register births of 350,000 children in Côte d’Ivoire. Without registration, these children, many of whom were born just before or during the recent conflict, would be left in “legal limbo” without access to social services, advanced schooling or employment.

While the Peacebuilding Fund has been involved with various initiatives in Côte d’Ivoire since 2008, this registration effort aims to promote national identity for improved social cohesion, strengthening the social fabric of the country.

Investment in the SDG’s will support the social, economic, and political conditions that may prevent conflict and sustain peace. This process, however, will take time and the UN Peacebuilding Fund is looking to make the immediate and targeted investments that may curb the potential for conflicts.

“Lets not be impeded by bureaucratic challenges … lets think outside the box and then try to help things at the country level,” da Costa continued. But in a large and complex institution like the UN, new and innovative ways of thinking do not easily gain political traction or financial backing. In some cases they may even be directly opposed.

The UN Security Council initially resisted the Peacebuilding Commissions’ role in conflict prevention, said Eliasson. They believed it was an “infringement” on their primacy as the UN body for peace and security matters. Even now, with the world’s compounding crises of conflict, climate change, and refugees, countries’ investments remain focused on reacting to crises rather than preventing them.

It is important to cover the urgent humanitarian needs of today, Skoog explained to IPS. “At the same time, it’s very important to get this shift going to avoid these conflicts in the first place.”

As the international body with the mandate to “save succeeding generations from the scourge of war,” the UN’s credibility rests largely on its ability to prevent and resolve conflict. Nevertheless, too often violence is permitted to spiral out of control and endure.

The president of the General Assembly for 2016-2017 has said he will support the shift to a more proactive mindset of ‘sustaining peace’ and encourage additional contributions to the Peacebuilding Fund. But after January 1 2017, when the next UN Secretary General takes office, it remains to be seen how the new leadership will prioritise proactive conflict prevention and the ‘sustaining peace’ mindset.