Jonathan Rozen is Africa Research Associate with the Committee to Protect Journalists (CPJ) and has previously worked in South Africa, Mozambique, and Canada with the Institute for Security Studies. 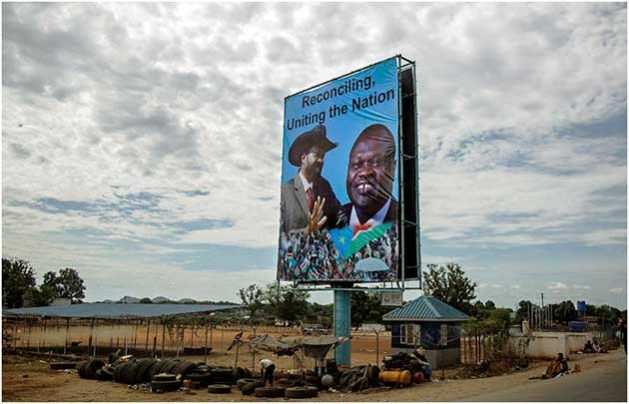 A billboard featuring President Salva Kiir, left, and opposition leader Riek Machar, is displayed in Juba in 2016. South Sudan is due to resume peace talks under an agreement that includes calls for an end to harassment of the press. Credit: (AFP/Albert Gonzalez Farran, CDS)

NEW YORK, Feb 5 2018 (IPS) - A ceasefire agreement signed on December 21 between the South Sudanese government and opposition forces has revived a 2015 peace process and brought hope that the conflict will not persist into its fifth year.

The agreement includes obligations to “ensure protection of media” and “[c]ease all forms of harassment of the media.” Yet, ahead of another round of talks scheduled for February 5, the government has continued its years’ long campaign of intimidating journalists.

Authorities have imposed bureaucratic red tape; denied journalists access to certain areas and, in some cases, the whole country; threatened reprisal for critical coverage; and created conditions that do not promote accountability and sustainable peace. The result is that international journalists are prevented from covering conditions inside the country and some local journalists self-censor for fear of reprisal, CPJ has found.

The government has defended its actions as a reasonable response to unwarranted criticism. “There are agitators sending negative messages to the social media, to the international community, that Juba is insecure,” Michael Makuei Lueth, South Sudan’s Minister of Information, told CPJ.

In response to remarks by President Salva Kiir on January 1 that called for an end to reports that could hinder the peace process, Makeui added, “Of course, this includes the media, whether it is national or international.”

Over the past year, authorities have shrunk the operating space granted to local and international press. In late October, the South Sudanese Media Regulatory Authority, which oversees the press, suspended three press associations until they applied for operating licenses, Reuters reported. One of the associations, the Union of Journalists of South Sudan (UJOSS), is still waiting for the body to approve its application and permit it to resume work.

Part of the process of registering for licenses included a requirement for unions to hand over lists of their members, Sapana Abuyi, the regulator’s director general for information and media compliance, told CPJ. Abuyi said that the registration process would not restrict who could work as a journalist in South Sudan. However, multiple journalists and members of South Sudanese civil society told CPJ they are concerned that it may be a further attempt by the government to control the press.

Members of the press are already forced to reapply for accreditation every three to six months, in a process that includes a review of their work, several journalists told CPJ. Abuyi told CPJ that he was not aware that journalists’ work was currently being reviewed, but said there were plans to begin assessing for “certain standards.”

In June, the Nairobi-based Foreign Correspondents’ Association of East Africa called for an end to South Sudan blocking at least 20 international journalists from covering issues inside the country via means including rejecting media accreditation and visa requests. The call came two months after the U.S.-based National Public Radio (NPR) reported that authorities detained its East Africa correspondent, Eyder Peralta.

Authorities held Peralta for four days after he entered the country to seek media credentials to cover the conflict, before ordering him to leave, according to reports. His South Sudanese fixer remained in detention for over a week longer.

Even local journalists are having trouble getting into South Sudan. According to a November 20 letter that the U.N. Panel of Experts on South Sudan wrote to the U.N. Security Council, the country’s National Security Service refused to renew the passport of John Tanza, a South Sudanese journalist who works with Voice of America, over allegations that his reporting was “anti-government.”

Tanza, who covers South Sudan issues from Washington, D.C., told CPJ that authorities still have his passport and that he has, in effect, been “stuck” outside his home country since December 15, 2016.

When asked about Tanza’s case, Abuyi told CPJ, “There should be no reason why [Tanza] should be prevented from coming [home], unless there is something not to do with journalism.”

Journalists’ access within the country is seemingly conditional on favorable reporting.

After authorities in December 2016 arrested and deported Justin Lynch, the American freelancer tweeted that officers had said his reporting was too critical of the government. He told CPJ he believes his status as a foreign journalist afforded him the privilege of deportation.

Authorities also use arbitrary detention and suspension orders to punish journalists already inside the country.

A Juba-based South Sudanese journalist, who spoke on condition of anonymity to avoid reprisals, told CPJ he has been threatened over his reporting. “Agents came after me … some even wrote on a Facebook page that I should be arrested and dealt with,” the journalist said.

And in July, CPJ documented how South Sudan Broadcasting Corporation (SSBC) director Adil Faris Mayat spent a week behind bars and was subsequently fired for failing to broadcast President Kiir’s address on the sixth anniversary of South Sudan’s independence. The letter terminating his employment, which was seen by CPJ, referred to Mayat’s actions as “sabotage.”

The websites of at least four media were blocked the same month for publishing what Makuei at the time told CPJ was “subversive” content. Michael Duku, an official with the press rights group Association for Media Development in South Sudan, told CPJ that the sites were likely targeted for their critical coverage of the government.

In early May, South Sudanese presidential spokesman Ateny Wek Ateny told Voice of America that the country’s media regulator suspended Al Jazeera English from working in the country after its journalists traveled to rebel-controlled areas without permission or an escort. Al Jazeera English confirmed to CPJ that the suspension was subsequently lifted.

“If there is any country that is to be applauded for being good to journalists, it’s South Sudan,” Ateny said, emphasizing the restriction was imposed out of concern for the safety of journalists and not Al Jazeera English’s coverage of the conflict.

As well as the threat of arrest or being denied access, journalists face danger from crossfire as they cover the civil war. On August 26, American freelance reporter Christopher Allen was killed during fighting between South Sudanese government and rebel forces in Kaya, near the borders with Uganda and the Democratic Republic of Congo.

Allen is the sixth journalist to be killed in connection with their journalism in South Sudan since it gained independence in 2011, according to CPJ research. CPJ is investigating the deaths of another four journalists to determine if their journalism was the reason they were targeted.

The ongoing meetings between South Sudan’s warring parties–formally termed the High Level Revitalization Forum (HLRF)–and their December 21 agreement is already being tested, with fighting continuing in some areas.

On January 27, during a meeting on South Sudan at the African Union Summit, U.N. Secretary General António Guterres said he had “never seen a political elite with so little [interest] in the well-being of its own people.” He added that he would support any decisions to ensure accountability for violations of the ceasefire or humanitarian law.

Similarly, Anataban, an independent South Sudanese youth movement named after the Arabic translation of “I’m tired,” called on social media and at an event in Juba for “all citizens of #SouthSudan to actively engage and keep a close watch over the HLRF process.” Its campaign is called #SouthSudanIsWatching.

“We are just emboldening the media to keep the records,” Jon Pen de Ngong, co-founder of Anataban and spokesperson for the South Sudan Civil Society Forum in East Africa, which will be representing civil society at the February talks, told CPJ. “It’s a warning to the warring parties and to the region itself … to whoever is going to play around with our peace … we are watching you.”

Journalists are well positioned to play a crucial role in bolstering accountability in South Sudan. When press freedom is impeded so too are existing, local capacities to sustain peace.