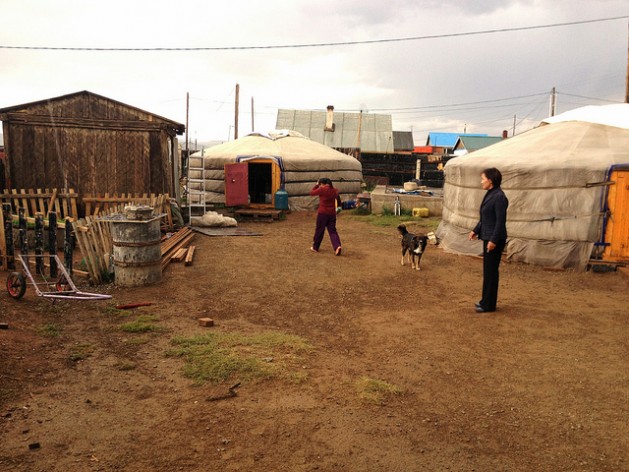 Products made from collected garbage provide a new source of livelihood for many in the “gur districts” (urban outskirts) of Mongolia’s capital city, Ulaanbaatar. Credit: Jonathan Rozen/IPS

ULAANBAATAR, Sep 22 2014 (IPS) - Ulziikhutag Jigjid, 49, is a member of a 10-person group in the Khan-Uul district on the outskirts of Mongolia’s capital Ulaanbaatar, which is producing brooms, chairs, containers, and other handmade products from discarded soda and juice containers.

“In the early morning we collect raw materials from the street, and then we spend the morning making products,” Jigjid told IPS. At four o’clock in the evening, she heads off to her regular job at a meat company.

The creation of her group’s business, and others like it, are part of an initiative called Turning Garbage Into Gold (TG2G), developed and supported by Tehnoj, an Ulaanbaatar-based non-governmental organisation.

“Ulaanbaatar produces about 1,100 tons of solid waste every day…This poses health risks to the population of the city and causes environmental damages." -- Thomas Eriksson, UNDP’s deputy resident representative in Mongolia
Founded in 2007, this organisation supports the creation of small businesses based on the sale of handcrafted products.

Defining itself as a “business incubator centre” for small and medium-sized businesses, Tehnoj estimates that it has organised trainings for approximately 30,000 people across Mongolia, through various projects.

The TG2G project is currently operational in three of Ulaanbaatar’s outer districts: Khan-Uul, Chingeltei and Songino Khairkhan, and includes 20 production groups of around five to six people each.

“The goal of this project is to recycle products and reduce unemployment,” Galindev Galaariidii, director of Tehnoj, told IPS.

The NGO receives its funding from the U.N. Development Programme (UNDP)’s Regional Bureau for Asia and the Pacific Innovation Fund, a new U.N. initiative to support innovative programmes that “provide the creative space and discretionary resources to prototype innovative solutions and experiment with new ways of working to tackle complex development challenges outside the traditional business cycle,” Thomas Eriksson, UNDP’s deputy resident representative in Mongolia, explained to IPS.

The Innovation Fund is currently supporting the creation of programmes in 32 countries and helps promote environmental sustainability and inclusive economic and social development, key components of the U.N.’s post-2015 development agenda.

Waste management and pollution are major problems in Mongolia, especially in the urban outskirts. With extremely limited infrastructure and a general lack of governmental resources, Galaariidii explains that 90 percent of garbage from these areas ends up on the street.

“Ulaanbaatar produces about 1,100 tons of solid waste every day… This poses health risks to the population of the city and causes environmental damages,” said Eriksson.

According to UNDP, over 10,000 households move to Ulaanbaatar every year. “Unfortunately, the migrant population [find it difficult to gain employment] and obtain access to already strained social services,” Eriksson continued.

The TG2G programme aims to mitigate the waste management issues while also tackling social inequalities by empowering the less fortunate members of some of Mongolia’s poorest communities.

According to World Bank data for 2012-2013, Mongolia’s poverty rate stood at 27.4 percent of its population of 2.9 million people.

Finding jobs in the landlocked country, comprised of some 1.6 million square km, of which only 0.8 percent is arable land, is no easy task. While the mining sector has led rapid economic growth over the last decade, with growth touching 16 percent in the first quarter of 2012, not everyone has benefitted. In fact, the unemployment rate in 2012 was roughly 11 percent.

But new product designs are constantly being created. Oven mitts, bags, hats and aprons are just a few of the new forms of merchandise being developed.

“Our technology design is improving day by day,” said Galaariidii. For example, where zippers once secured the fabric covers of chairs, now elastic rings are used.

Presently, city cleaning teams are testing products with the potential for a government contract, and soda-bottle-broom orders are already coming in from hairdressers in Ulaanbaatar.

Communities involved in the TG2G programme seem to have a fresh sense optimism about the future.

Unrolling a large hand-drawn poster, Jigjid and two other group members – Baguraa Adiyabazar, 54, and Baasanjav Jamsranjav, 37 – explained how they plan to use the funds they earn from selling their products.

They want to build a kindergarten school, achieve full employment in their area, build a chicken farm, expand their ability to grow their own food and increase the availability of cars. There are even plans to allot a certain amount of the money towards a savings account, which can then be used to make small loans within the community.

“We plan to have more registration for the projects and more training programmes,” Jigjid explained. “[Eventually] we want to replace products that are imported from other countries.”

Beyond the material level, the programme is also having a positive impact on the mentality of the community.

“We have a mission to become more creative,” Jigjid continued. “Now as a group we have a goal.”

Next year Jigjid will retire from her job with the meat company and focus on building their product development into a successful business.

“I will have something to do,” she said happily. “I can see my future is secure.”