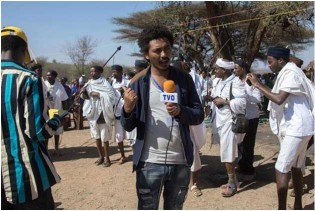 By Muthoki Mumo
On June 22, Ethiopia was plunged into an internet blackout following what the government described as a failed attempted coup in the Amhara region.

By Muthoki Mumo
(CPJ) - During a trip to Addis Ababa in January, it was impossible to miss the signs that Ethiopian media are enjoying unprecedented freedom. A flurry of new publications were on the streets. At a public forum that CPJ attended, journalists spoke about positive reforms, but also openly criticized their lack of access to the government. At a press conference, journalists from state media and the Oromia Media Network, an outlet previously banned and accused of terrorism, sat side by side.

By Muthoki Mumo and Jonathan Rozen
On January 10, radio journalists Darsema Sori and Khalid Mohammed were released from prison after serving lengthy sentences related to their work at the Ethiopian faith-based station Radio Bilal. Despite their release and Prime Minister Hailemariam Desalegn's promise earlier this month to free political prisoners, Ethiopia's use of imprisonment, harassment, and surveillance means that the country continues to be a hostile environment for journalists.
ADVERTISEMENT ADVERTISEMENT