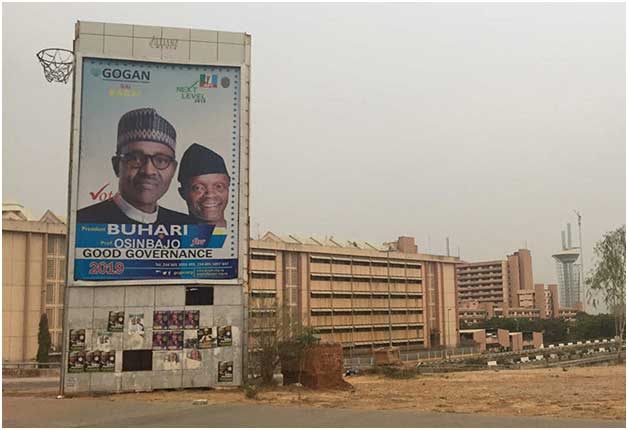 A billboard for Nigeria's incumbent president Muhammadu Buhari and his deputy, who won re-election in February. (CPJ/Jonathan Rozen)

NEW YORK, Apr 17 2019 (IPS) - When Nigeria’s incumbent president Muhammadu Buhari won re-election this year, he campaigned (as he did in 2015) on an image of good governance and anti-corruption. Billboards in the capital, Abuja, bore the smiling faces of the president–who first led Nigeria as military ruler from 1983-1985–and his vice-president Yemi Osinbajo, and called for voters to let them “continue” their work and take the country to the “Next Level.”

Under Buhari’s first elected term, CPJ documented detentions, assaults, and harassment of the press. In one particularly grave case, Jones Abiri, editor of the Weekly Source, was detained without charge in 2016 and denied contact with his family or a lawyer, for over two years.

Abiri was released in August, but in the months before the February general election, authorities continued to harass the press: Premium Times reporter Samuel Ogundipe was detained and prosecuted for refusing to reveal a source; Buhari stated publicly that “rule of law must be subject to the supremacy of the nation’s security and national interest”; and the military raided two Daily Trustoffices, according to media reports and CPJ research.

CPJ spoke with five Nigerian journalists about their views on press freedom and the potential challenges in Buhari’s second elected term. Their answers have been lightly edited for length and clarity. 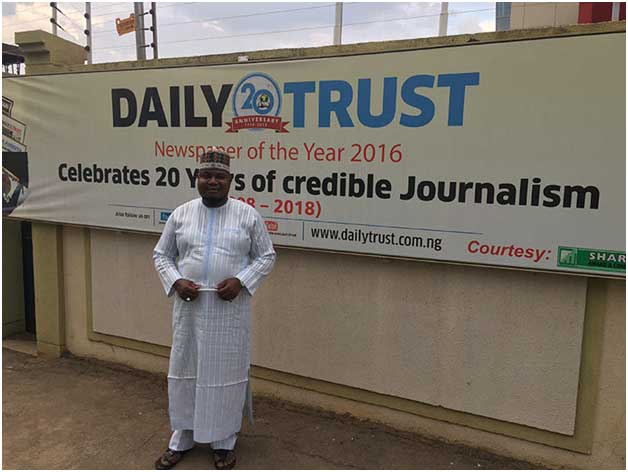 Nurudeen Abdallah, investigations editor of the Daily Trust, pictured outside the newspaper’s headquarters in Abuja. The paper was raided by the military in January. (CPJ/Jonathan Rozen)

You know Buhari was a military ruler. When he was campaigning for election in 2015, he promised Nigerians that he’s a converted democrat. In the last four years he didn’t live up to his promise that journalists will be safe under his democratic administration.

Our offices here in Abuja and our regional office in Maiduguri in northeast Nigeria were raided, closed down and journalists were taken away. So many bloggers are undergoing prosecution across the states by governors that are under the same party platform as him. He did not live up to expectations.

At the beginning I expect [the administration] will scale down the attacks, because they won the elections. But toward the next election, they will likely scale it up. At that time, they [won’t] want stories they consider negative to the government to be published.

Certainly they will use their normal state apparatus: denial of advertisements, spying on journalists, and sometimes outright attack. But we have our constituency, our readers. We have to tell them the truth, not what the government wants.

I’m only hoping that the people in power–the presidency and the state governors–will see reason and see journalists as partners in progress. The same people who are complaining against our reports now were the same people that were in the opposition. It’s a vicious cycle, but they should know that the people have the right to know. They should be responsible to the electorate.

They can only be there in power for a limited time. General Sani Abacha [Nigeria’s military ruler from 1993-1998] was here. Where is he today? The journalists that were hounded into prison, the newspapers he closed down, they are back in full throttle. But he is no more. That is just my message. You cannot muzzle the media. Maybe you can muzzle it for some time, but not forever. 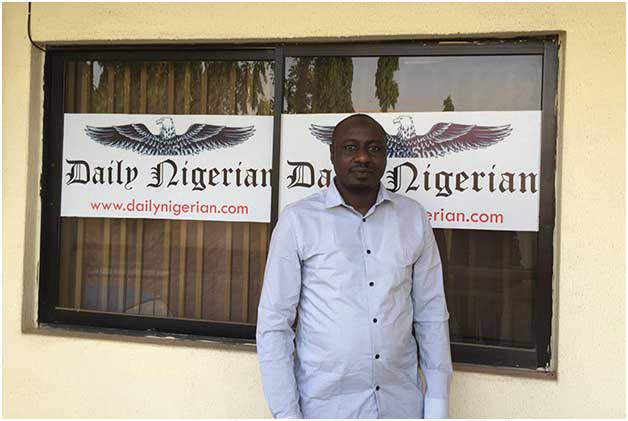 Jaafar Jaafar, of the Daily Nigerian, pictured outside the office of his newspaper in Abuja. (CPJ/Jonathan Rozen)

Buhari’s first term was really bad. A number of journalists were incarcerated for no just cause. I can remember the case of Jones Abiri, who was detained for more than two years in the secret service dungeon.

I fear for press freedom in Nigeria, as the Buhari administration may get emboldened. The president has his final term now. He is not seeking re-election. My fear is that this administration in the next four years may not condone some publications. Anything that does not favor the government, or the government doesn’t like, they may descend on.

Just a few days before the election, they laid siege to the Daily Trust offices, took computers, and only recently returned them. What about after the election? What do you think will happen?

In November, the Kano state government filed a civil suit against me for publishing videos of the governor of Kano state, Abdullahi Umar Ganduje, allegedly receiving bribes. Government officials tried to persuade me not to publish the videos. But I stood my ground and I published.

I have received a lot of threats [from people saying] “We know where you are, and we know how to deal with you.” I went into hiding for about a month. Some people that I knew in the government warned me that there are some plans against me, that I should just leave my house or I shouldn’t go to Kano, my home state. I didn’t go to Kano during this election, even though I registered there to vote.

I believe the only thing that may reduce the crackdown on newspapers or crackdown on the press is if agencies like CPJ will be very watchful over the next four years. Just put your eyes on Nigeria.

[EDITOR’S NOTE: In his defamation complaint, the governor said that the reports were false, according to court documents seen by CPJ. Salihu Tanko Yakasai, a spokesperson for Ganduje, told CPJ he was unable to comment on Jaafar’s case because it is already in the court. He said that “no effort was made” by the government to prevent Jaafar from publishing. In October, Yakasai told CPJ there was “no threat from the government side” and “no reason to believe there is any threat” against Jaafar.] 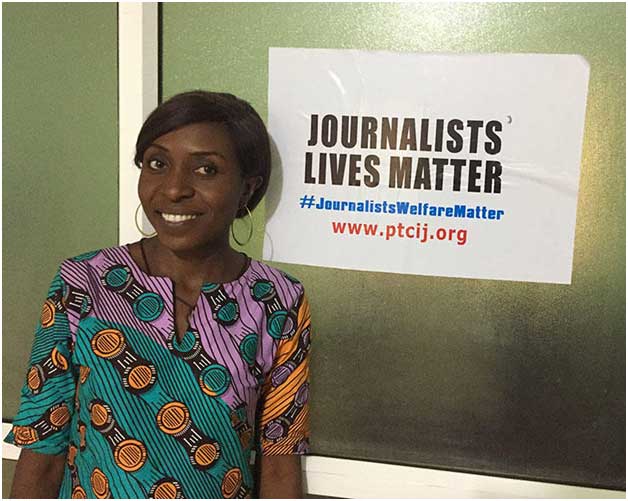 Evelyn Okakwu, a reporter for Premium Times, pictured at the Center for Investigative Journalism in Abuja. (CPJ/Jonathan Rozen)

The challenges for the next four years are not particular to the media, but to the entire system in Nigeria. You find out that where there is a perceived score to settle between the government and an individual or a group perceived to be “enemies of the government,” a government agency is used to track down those people.

In January 2017, I was arrested alongside Premium Times publisher Dapo Olorunyomi for a story. But there was a loud, general consensus in Nigeria and in the international media against it, and in the end the army even apologized. So we are getting somewhere.

What happened during Samuel Ogundipe’s arrest in August is worrisome. Unless we come to that point that institutions act only by the law, then we will continue to go around and around this circle, where people in power believe they can just use a government agency–be it the police or the Department of State Security–to just hijack a person they feel is a threat, and get them locked up. 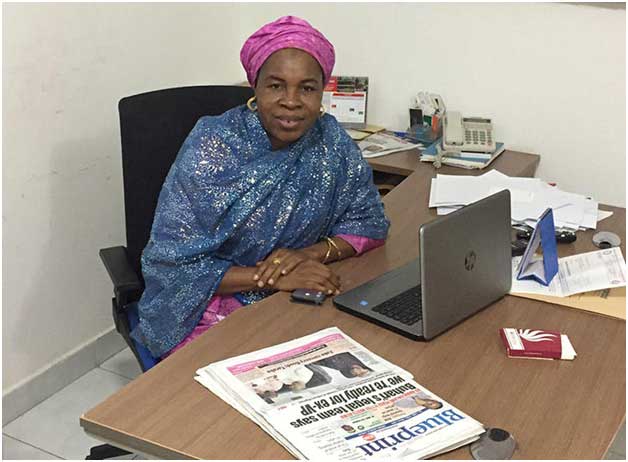 Zainab Suleiman Okino sits at her desk in the Blueprint office in Abuja. (CPJ/Jonathan Rozen)

Although the government won their re-election, they are still not comfortable. They try to muzzle journalists who have views different from theirs. Going forward there’s palpable fear in the air, fear that Buhari’s past as Nigeria’s military leader might be re-enacted.

Jones Abiri for example. The government said they suspected he was doing some form of terrorism, or he was aiding or abetting terrorism. For them to be able to put him in prison for two years, they had to read political meaning into his offense, which I do not think is the truth. So once in a while we have things like that. But by and large the Nigerian press is fairly open. 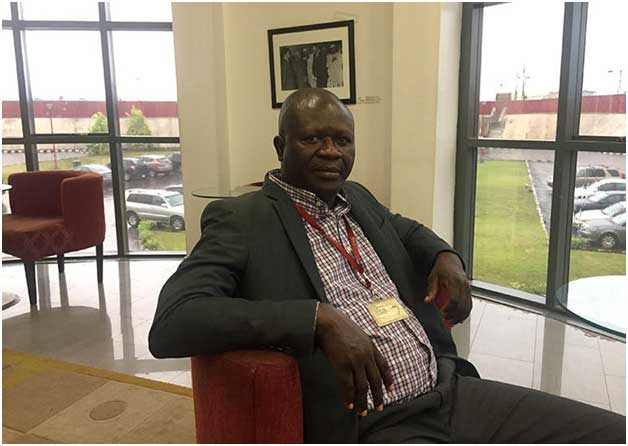 Martin Ayankola, editor of Punch, at the headquarters of the newspaper, known as ‘Punch Place,’ outside Lagos. (CPJ/Jonathan Rozen)

I would say that the situation is not terrible, although there have been attempts to curtail press freedom. I think that if you do your job right, you are also respected.

Journalists are not supposed to make people in government look good. That is not our business. We are supposed to put out information we have. [The government] shouldn’t see us as an extension of their public relations departments.

The biggest challenge that I see is the attempt to silence the opposition. People should understand that there won’t be any democracy without opposition.

There are subtle ways to create problems for the press. For instance, the government may decide to hit the revenue of the papers, because the government is a very big advertiser. That will be a subtle way to arm twist you, to get you to dance to their tune. You always see the arrests, but there are also subtle attempts to also cow the media.

[Reporting from Abuja and Lagos, Nigeria.]

*Jonathan Rozen has worked in South Africa, Mozambique, and Canada with the Institute for Security Studies, assessing Mozambican peacebuilding processes. He was a UN correspondent for Inter Press Service (IPS) and has written for Al Jazeera English and the International Peace Institute. He speaks English and French.