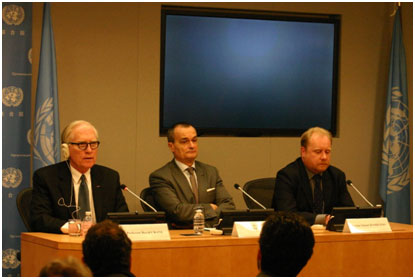 UNITED NATIONS, Apr 16 2014 (IPS) - It plays like a Hollywood movie. A former member of the Syrian military police, later codenamed “Caesar”, smuggles digital memory sticks containing photographs of corpses displaying signs of severe torture and starvation — in his shoe. That was between September 2011 and August 2013. But now comes the question of accountability.

“What he brought out over a period of two years is direct, specific, provable evidence of widespread and industrialised killing,” Professor David Crane, former Chief Prosecutor of the Special Court for Sierra Leone, told reporters Tuesday. “The photographs and the witness himself are credible and sustainable in a court of law.”

At the beginning of the year, Crane and Dr. Stuart Hamilton, a forensic pathologist from England, traveled to the Middle East to assess the credibility of the photographs and the individual who captured them on film.

At first they were skeptical, but now they are convinced of the authenticity of both, Crane said.

It’s direct, provable, sustainable evidence — beyond a reasonable doubt– of war crimes and crimes against humanity being committed by the regime of President Bashar al Assad.

But Crane stressed that while the photographs were taken at government-run detention centres, the goal is to hold all perpetrators of such crimes to account.

“There are no good guys and bad guys in this anymore> Both sides are committing serious violations of international law, and we have to deal with all sides fairly and openly for this to be a respected and appropriate justice mechanism,” Crane told IPS.

There are four options for justice, explained Crane, a Syrian court, an internationalised domestic court, with assistance from the international community, a regional court and the International Criminal Court (ICC).

“I’m advocating for two pieces, a more local court and then one at the ICC, for prosecuting more senior individuals,” Crane told IPS.

France is pushing for the UN Security Council to refer Syria to the ICC because Damascus is not a signatory to the Rome Statute — and it is the only way the court can get jurisdiction in the country.

But with Russia’s veto power on the council this appears an unlikely scenario.

“We have created the ICC, we are party to the ICC, it would be weird if we were to simply give up the ICC, and simply say the ICC is a dead end … so we are trying again,” said Ambassador Gérard Araud, Permanent Representative of France to the U.N.

”We are going to try to convince our Russian friends and the other members of the Security Council that it is a fair solution to a real problem,” he continued.

Currently, 58 U.N. member states have declared their support for an ICC referral on Syria. So has the U.N. High Commissioner for Human Rights Navi Pillay.

“Our findings confirm that torture is being routinely used in government detention facilities in Syria, and that torture is also used by some armed groups,” Pillay said Monday.

The photo evidence provided to Crane and Hamilton came from only three of the more than 50 detention facilities in Syria. From this evidence and other evidence, Crane said a “crime based matrix” is being built, which maps and logs crimes against humanity. Currently, it is more than 1,200 pages long.

“This is not about Assad … It’s about justice for the people of Syria,” added Crane.