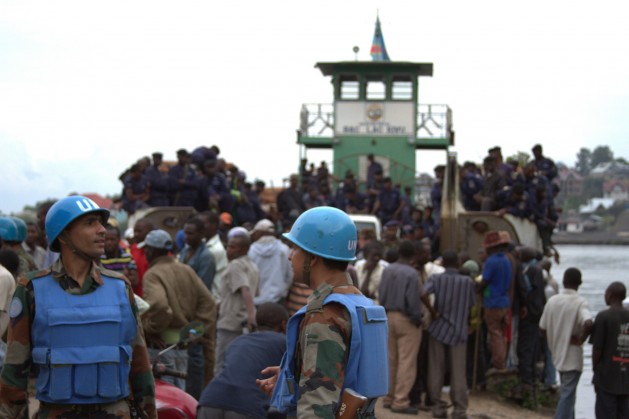 UNITED NATIONS, May 17 2016 (IPS) - In a world where annual defence spending is over 1.6 trillion dollars and the UN Peacebuilding Fund receives less than 700 million dollars, it would seem that the military industrial complex is unwaveringly entrenched.

This imbalance in global priorities is not easily overcome, but that is exactly what a high-level meeting on Peace and Security held here last week aimed to do.

“We need to build a peace industrial complex,” said Macharia Kamau, Permanent Representative of Kenya to the UN and Chair of the UN Peacebuilding Commission, an advisory body that supports efforts to prevent conflicts around the world. Building this “complex” would mean increasing political commitments, ensuring predictable financing, and strengthening international partnerships for peace operations targeting the roots of conflicts.

Since 2000, the UN has sought to reform the way it conducts peace operations, and a renewed focus on preventive action lies at the heart of its mandate. One of the main aspects of this effort was the creation of the UN Peacebuilding Commission, and its associated Peacebuilding Fund. These bodies are different from the larger UN Department of Peacekeeping Operations in that they try to identify and financially support targeted projects to prevent conflict, rather than reacting to existing crises.

“We need to look at prevention not as something soft or politically correct, but as realpolitik.” -- Børge Brende, Minister of Foreign Affairs of Norway.

“If we want peace in any given society, in any given region, we need to address the underlying causes … the root causes, the drivers of the conflict,” Oscar Fernandez-Taranco, Assistant Secretary-General for Peacebuilding Support, told IPS. “[These drivers] can be linked to climate change, they can be linked to exclusion, to marginalization, by the way we treat women, youth, and political opponents.”

Given that it is mentioned in Article One of the UN Charter, the idea of conflict “prevention” is not necessarily new, however often UN member states have struggled to commit resources to pre-emptive efforts, instead primarily spending funds on reactive crisis management and humanitarian aid.

“The key [prevention] element of the UN charter has many times been treated as an afterthought,” Fernandez-Taranco continued. “That afterthought needs to become the first thought, before we have conflicts escalating and running out of control.”

Building on a 2015 review of UN peacebuilding, discussions at last week’s meeting repeatedly linked peace and security, human rights, and development to the creation of “sustainable peace.” This means recognizing how the achievement of the UN’s Sustainable Development Goals (SDGs) may prevent violent conflict over the long term.

One example of this link is the Peacebuilding Fund’s support for female mediators in Burundi. During recent tensions, women have worked across ethnic, cultural and religious divides to maintain communication among political parties and avoid violence. Empowering women in conflict mediation and peace processes works toward achieving the SDG on gender equality while also preventing conflict.

The value of targeting smaller locally owned initiatives, like those in Burundi, with flexible support was a major finding of another 2015 review of UN peace operations. It emphasized that the UN is “often too slow to engage with emerging crises” and that too often “mandates and missions are produced on the basis of templates instead of tailored to support situation-specific political strategies.”

But while the week’s meetings focused heavily on recognizing the capacity for socioeconomic development and more inclusive societies to prevent conflict, force was nevertheless noted by some as necessary under certain conditions.

“Force is an element that needs to be on the table, including the drone activities,” Abdusalam Omer, Foreign Minister of Somalia, told IPS in reference to the security situation in his own country, where African Union troops clashed with al-Shabaab militants on Thursday. “Having said that, I don’t think you can resolve the conflicts in Africa or anywhere in this world only by force,” he added.

There is a growing recognition of the need to find more pragmatic solutions to conflict. “We need to look at prevention not as something soft or politically correct, but as realpolitik,” Børge Brende, Minister of Foreign Affairs of Norway, explained. This rationale argues that it is in countries’ national interest to invest meaningfully in projects like UN Peacebuilding to prevent crises from occurring. In almost every meeting, the failures of conflict prevention were tied to the large number of refugees seeking to enter Europe.

This reasoning was further bolstered by UN member states’ calls to build on the diplomatic momentum fostered by the successful adoption of the SDG agenda and the Paris climate agreement in 2015. “This is basically political will at the highest levels to say that we are going to work together,” Michael Grant Ambassador and Deputy Permanent Representative of Canada to the UN, told IPS. Key to capitalizing on this momentum, however, is recognizing the links between peace, security, and the successful implementation of the SDG agenda.

Skepticism, however, remains. Especially regarding powerful countries’ commitment to UN peacebuilding. Many believe that without dedication from the permanent five members of the UN Security Council – China, Russia, France, the UK and the US – the shift to proactive conflict prevention will not translate from rhetoric into action. “I don’t know if it’s really a shift,” said Tedros Adhanom Ghebreyesus, Foreign Minister of Ethiopia. “There is no political commitment at the top.”

But many of the meetings’ attendees also expressed hope that the new UN Secretary General, to be appointed and begin work on 1 January 2017, would strengthen international commitment for peacebuilding.

The world’s military industrial complex thrives because of political and financial support for military spending and military solutions to global challenges. To create a “peace industrial complex,” more countries will need to commit political and financial support for preventive projects, like UN peacebuilding. But this would also necessitate a change in UN member states’ perspective – away from the belief in reactive investment to contain crises and toward a commitment of resources before conflicts emerge.