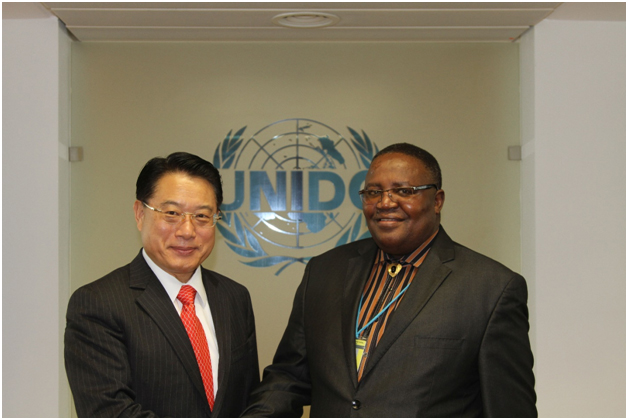 Ambassador Simon Madjumo Maruta, chairman of the Vienna chapter of the Group of 77 and Permanent Resident of Namibia to the UN office in Vienna (right) and Director General of UNIDO, Mr. LI Yong

UNITED NATIONS, Nov 23 2016 - The Vienna-based UN Industrial Development Organization (UNIDO), which commemorates its 50th anniversary this year, has continued to play a leading role in the industrialization of developing nations and economies in transition, since the UN agency’s creation in 1966.

In recognition of UNIDO’s significant contributions, the 193-member UN General Assembly has called on UNIDO to lead the third Industrial Development Decade for Africa 2016-2025, specifically to work in partnership with African Governments “to develop and operationalize programmes to accelerate Africa’s industrialization over the next 10 years.”

In an interview with the G77 Newswire, Ambassador Simon Madjumo Maruta, chair of the Vienna chapter of the Group of 77 and Permanent Resident of Namibia to the UN office in Vienna (UNOV), said UNIDO has always worked closely with the G77, making sure that UNIDO’s activities and programmes in the field, as well as policy advice, help accelerate inclusive and sustainable industrial development in countries of the Group.

The Lima Declaration of 2013 was a turning point in UNIDO’s history and expressed a new mission: to promote and accelerate inclusive and sustainable industrial development (ISID), said Ambassador Maruta, who is also Namibia`s Resident Permanent Representative to the International Atomic Energy Agency (IAEA), UNIDO and Provisional Technical Secretariat of the Comprehensive Test Ban Treaty Organization (CTBTO).

UNIDO’S mandate is fully recognized in the UN’s Sustainable Development Goals -9 (SDGs), which lays out the following task: “Build resilient infrastructure, promote inclusive and sustainable industrialization and foster innovation”. The targeted date to achieve all 17 SDGs, which are an integral part of UN’s post-2015 development agenda, is 2030.

Q: How important is UNIDO for the industrialization of developing nations?

Ambassador Maruta: Historically, the contribution of industrialization to poverty alleviation and wealth creation is very well documented. It is obvious that moving from structural change from economies based on low technology to medium and high technology manufacturing has a huge impact on industrial diversification, wealth creation and human development.

For example, statistics show that when the Manufacturing Value Added (MVA) increases by 1 per cent in a country, the poverty headcount decreases by almost 2 per cent. For the same increase of MVA, the number of deaths related to armed conflicts falls by 4.5 per cent. There is also a strong correlation with people’s access to health, education, gender equality, life expectancy and many other social indicators.

Last but not least, and just to give an idea of the relevance and impact of UNIDO nowadays is the fact that the United Nations General Assembly has called on UNIDO to lead the third Industrial Development Decade for Africa 2016-2025, to work in partnership with African Governments to develop and operationalize programmes to accelerate Africa’s industrialization over the next 10 years. This is very important as it gives UNIDO a mandate for the next 10 years emanating from the main UN body, the General Assembly.

Q: What in your opinion are some of the major successes of UNIDO during its 50 year existence?

Ambassador Maruta: UNIDO’s website is full of success stories on how UNIDO has helped developing countries in establishing their industries.

In carrying out the core requirements of its mission, UNIDO has gradually increased its technical services over the past fifty years. Here are the most prominent examples of UNIDO’s achievements:

Multilateral environmental agreements
UNIDO supported countries in meeting their obligations under the major Multilateral Environmental Agreements (MEA), such as the Montreal Protocol, the Stockholm Convention, the Minamata Convention on Mercury, and the United Nations Framework Convention on Climate Change (UNFCCC).

UNIDO works to encourage the adoption of sustainable industrial solutions by converting and upgrading production lines of companies of all sizes. Interventions target particularly the foam, refrigeration, air conditioning, aerosol, solvent and healthcare sectors, as well as fire protection and agro-industry. In all areas, the introduction of new ozone-friendly technology and equipment is coupled with training on technology use and safety.

UNIDO has completed over 1,340 Montreal Protocol projects through the Multilateral Fund, the Global Environment Facility (GEF) and through bilateral contributions. Currently, it is implementing hydrochlorofluorocarbons (HCFC) phase-out management plans in 70 countries.

Working with industry, UNIDO helps to optimize production processes to avoid POPs emissions, set up new facilities and production lines utilizing POPs alternatives, as well as construct and operate facilities for the safe management of POPs-containing material. In this regard, particular emphasis is placed on the promotion of best available techniques (BAT) and best environmental practices (BEP) for POPs reduction and for the environmentally sound elimination of POPs.

UNIDO furthermore works to develop new industries without POPs releases and to establish recycling and waste management industries in a manner that minimizes the generation and release of POPs throughout industry.

AfrIPANet was initiated in 2001 and has grown since then from strength to strength, drawing on more participating countries and deepening discussion and debate on investment promotion strategies in Africa. Currently the network comprises a forum of 38 IPAs in Africa.

Q: How would you project the importance of UNIDO in the foreseeable future?

As a first step, UNIDO developed a new type of assistance package for its Member States: the Programme for Country Partnership, a custom-built formula for each beneficiary country. The first of such programmes was launched in Ethiopia and Senegal, and today a Programme for Country Partnership is successfully developed in Peru. Other Member States, most of them part of the Group, are eager to have the same approach implemented in their country.

Through its programmes, UNIDO can significantly contribute to poverty alleviation, accelerate job creation for youth and reduce inequalities, develop human capacity, with the aim to strengthen the welfare and the social development of human beings.

Q: How closely does the G77 work with UNIDO in protecting the interests of the developing world?

Ambassador Maruta: UNIDO has its Headquarters in Vienna and Offices in Brussels, Geneva and New York that maintain on-the-spot contacts with Member States and the other United Nations organizations based there. Still, with the progressive decentralization of decision-making processes at the national level, including those related to the UN Reform and the ONE UN pilots, the presence of UNIDO in the field is becoming increasingly crucial. UNIDO thus maintains a field network comprising of 47 regional and country offices around the world.

In addition, UNIDO introduced in 1986 a Network of Investment and Technology Promotion Offices (ITPOs). Since then, the UNIDO ITPOs have contributed to reducing development imbalances, by brokering investment and technology agreements between developed, developing countries and countries with economies in transition.

Located in both hemispheres, the specialized network of UNIDO ITPOs opens up opportunities for investors and technology suppliers to find potential partners and offers unique services to both entrepreneurs and business institutions.

In order to match the needs of developing countries with the donors, UNIDO will organize its third Donor Meeting as part of the weeklong event to celebrate UNIDO’s 50th Anniversary under the theme “Together for a sustainable future”. It will also highlight the Organization’s activities and its mission of inclusive and sustainable industrial development (ISID), as well as the role and benefits of working closely with the private sector, civil society and other partners in implementing the 2030 Development Agenda and the SDGs.

Q: Any other thoughts on UNIDO?

Together one can continue the drive to eradicate poverty with our focus on, amongst others, achieving youth employment by helping young people to acquire skills and create new businesses, gender equality and the empowerment of women, enhancing South-South and triangular cooperation, and building effective partnerships – with all development actors including, increasingly the private sector.

Despite the fact that some of the developed countries have withdrawn from UNIDO, 2015 was the most successful year of receiving voluntary contributions and the same countries that have left the Organization, continue to financially support UNIDO’s work. This is a clear sign on how UNIDO continues to play a major and crucial role for the developing world.

Q: What is the primary mandate of the G77 Chapter in Vienna?

Ambassador Maruta: The liaison office of the Vienna Chapter of the G-77 was inaugurated on 19 May 1998 by the Director General of UNIDO, Mr. Carlos Magariños, and the Chairperson of the Chapter, H.E. Ambassador Nozipho Mxakato-Diseko, the then Permanent Representative of South Africa.

(On 29 June 1998, then U.N. Secretary-General Kofi Annan paid a visit to the premises of the newly established Liaison Office of the G-77 Vienna Chapter during his trip to the Austrian capital).

The G-77 Vienna Chapter sponsors and negotiates resolutions and decisions at global conferences and other policy-making organ meetings held under the aegis of the United Nations that deal with international cooperation and development and are of particular concern and interest to developing countries.

The Vienna Chapter is very active in all Vienna-based UN Organizations, namely UNIDO, IAEA (International Atomic Energy Agency), UNODC (United Nations Office for Drugs and Crime) with UNOOSA (Office for Outer Space) and CTBTO (Preparatory Commission for the Comprehensive Nuclear-Test-Ban Treaty Organization). Its purpose is to enhance the participation of developing countries in the International Organizations and promote technical assistance in those entities.

UNIDO has seconded one staff member to the Office and is covering all the costs involved since its inauguration 18 years ago.