This article is part of IPS coverage of the International Day for the Elimination of Violence Against Women, celebrated Nov. 25. 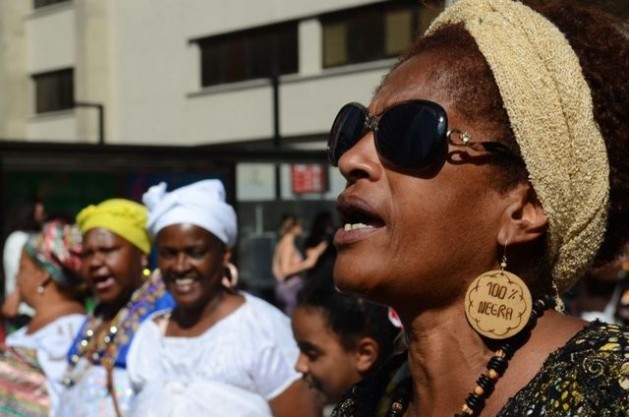 A group of black women take part in Black Awareness Day celebrated on Nov. 20 in the city of São Paulo. Gender-related violence has increased, in particular among women of African descent in Brazil, despite the passage of better laws. Credit: Rovena Rosa/ Agência Brasil

RIO DE JANEIRO, Nov 24 2016 (IPS) - Four months in hospital and a number of operations saved the life of Maria da Penha Fernandes of Brazil, but the rifle shot left her paraplegic at the age of 37. When she returned home, her husband tried to electrocute her in the bathroom.

It eventually became clear that the author of the first attack, the shot in the back while she was sleeping one night in May 1983, had also been her husband, who claimed four thieves had broken in, tied him up, and shot her.

She left the family home protected by a court order that gave her custody over the couple’s three daughters, and launched, from her wheelchair, a 19-year battle in court to bring him to justice for the two murder attempts.

“The Maria da Penha Law stipulates that first you have to file a complaint with the police, in order for it to reach the judicial authorities, and we know that the police don’t protect black women. The obstacle is racism, and if this is not recognised public policies will not be adjusted to meet the needs of black women. We have to face racism, train civil servants, police as well as administrators, to treat us as human beings.” -- Jurema Werneck

After his lawyers managed to overturn two convictions in Brazilian courts, she turned in the 1990s to the Inter-American Commission on Human Rights, which in 2001 held the government of Brazil accountable for judicial tolerance of domestic violence in the case and recommended that it adopt more effective measures to combat violence against women.

Finally in 2002, the attempted murderer was sentenced to 10 years in prison. But he managed to walk free after just two years.

The main accomplishment of Da Penha, a bio-pharmacist in Fortaleza, capital of the northeast Brazilian state of Ceará, was to inspire a law that was named after her, adopted by the national Congress in 2006, against domestic violence.

However, gender-related murders continued to increase in Brazil, though at a slower rate.

From 1980 to 2006 the number of murdered women grew 7.6 per cent annually, while from 2006 to 2013 the rate dropped to 2.6 per cent, according to the Violence Map, produced by Julio Jacobo Waiselfisz, Latin American Social Sciences Institute (Flacso) coordinator of studies on violence in Brazil.

The Maria da Penha law, special police units for women and other instruments “are effective against violence, but the resources are insufficient,” Clair Castilhos Coelho, executive secretary of the National Feminist Network of Health, Sexual and Reproductive Rights, told IPS.

But there is an important reality in this Latin American country of 205 million people: results differ depending on skin colour.

“For black women the situation has worsened,” Dr. Jurema Werneck, one of the coordinators of Criola, an NGO that promotes the rights of black women, told IPS.

“Racism lies beneath this contrast. Mechanisms to combat violence do not protect the life of everyone in the same way,” said Werneck.

“The Maria da Penha Law stipulates that first you have to file a complaint with the police, in order for it to reach the judicial authorities, and we know that the police don’t protect black women,” she added.

“The obstacle is racism, and if this is not recognised public policies will not be adjusted to meet the needs of black women. We have to face racism, train civil servants, police as well as administrators, to treat us as human beings,” she said. 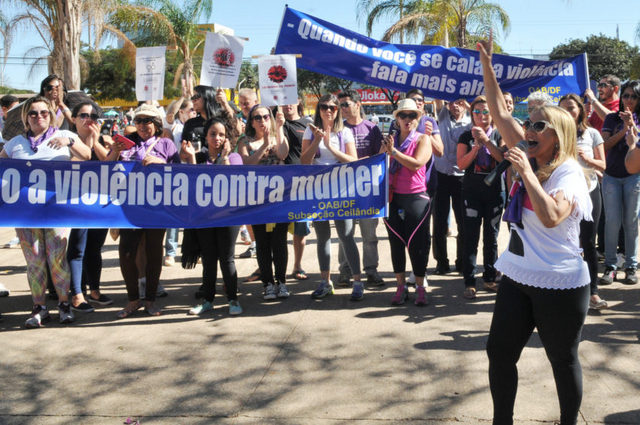 Demonstrators call for full enforcement of the Maria da Penha Law against domestic violence in Brazil, 10 years after it was passed. One of the signs reads: ”When you remain silent, violence speaks louder.” Credit: Tony Winston/ Agência Brasília

A more effective application of the Maria da Penha Law would be to take the complaints directly to the offices of the public prosecutor and the ombudsperson, which would require a larger number of public prosecutors and public defenders rather than more police officers, said Werneck, who pointed out that this is already being done in some neighborhoods in the southern city of São Paulo.

It is also necessary to combat “institutionalised racism”, which permeates many law enforcement bodies, for example, and “to work together with society to value black women,” who have historically been marginalised in Brazil, she said.

Another accomplishment by women was the adoption in March 2015 of a law that establishes stricter sentences for femicide, defined as the murder of a woman due to gender-related motives.

Brazil thus became the 16th country in Latin America to adopt a law against femicide. According to the Violence Map, Brazil ranks 7th in the world with respect to the number of femicides: official figures indicated in 2015 that 15 women a day were the victims of gender-related killings.

However, violence against women includes other forms of aggression that affect the female population in their daily lives.

Nov. 25, the International Day for the Elimination of Violence Against Women, kicks off 16 days of activism.

In Brazil, murders of men and boys represent 92 per cent of a total that is reaching 60,000 murders a year, a figure that only compares to the numbers seen in war-stricken areas.

But with regard to specific kinds of violence, such as physical, psychological and economic abuse, rape and abandonment, women tend to represent a majority of victims.

In 2014, a total of 147,691 women who had suffered some kind of violence were treated in Brazil’s Unified Health System, two times the number of men. That meant 405 women a day needed medical care because they were victims of violence.

The last National Health Survey, which is carried out by the Ministry of Health and the Brazilian Geography and Statistics Institute every five years, found that 2.4 million women were victims of physical aggression at the hands of someone that they knew, against 1.3 million men.

With regard to rape, the Brazilian Public Security Forum’s Annual Report registered 47,646 cases in Brazil, 6.7 per cent fewer than in the previous year. But the drop, which is based on documented cases, does not reflect a trend because experts believe that at least two-thirds, or up to 90 per cent of cases, go unreported.

”Violence against women may be increasing due to the new stronger role of women, who in the past were submissive in their homes and were used to suffering in silence. But with the old patterns broken, with women achieving rights, working, voting and reporting abuse, the oppressors respond with more violence,” said Castilhos.

There is also an increase in complaints as a result of gains achieved, such as the Maria da Penha and femicide laws and regulations that make reporting cases of abuse obligatory in the public health system, she said.

In her opinion, ”the greatest violence against a woman in the last few years in Brazil was the removal of former president Dilma Rousseff (Jan. 1, 2011 – Aug. 31, 2016), who had committed no proven crime to justify it, by a parliament where the majority of its members are accused of electoral crimes and corruption.”

The political environment generated by the new government headed by Michel Temer, Rousseff’s former vice president, ”paves the way for more violence against women, due to its misogynistic nature,” she said, pointing out that no ministry is headed by a woman and complaining about proposals to reverse previous progress made in empowering women.