Humanitarian Crisis, Result of Decades of Globalization with No Concern for Social Justice

Dr. Hanif Hassan Al Qassim, Chairman of the Geneva Centre for Human Rights Advancement and Global Dialogue, a think-thank dedicated to the promotion of human rights through cross-cultural, political, religious and civilizational dialogue, and through training of the upcoming generations of stakeholders in the Arab region.

Dr. Al Qassim' op-ed is issued on the occasion for World Day of Social Justice 2017.

GENEVA, Feb 21 2017 (IPS) - The distressing images of desperate people making the treacherous journey across the Mediterranean Sea and the Balkans to escape armed conflict, social tensions, discrimination and poverty harm the preconditions to achieve social harmony. 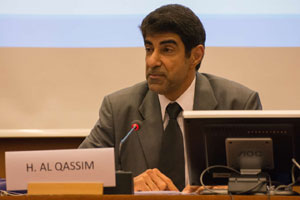 This humanitarian crisis is the result of decades of freewheeling globalization with no concern for social justice in all countries. One of its consequences is social upheavals and mass exodus.

What remains today of the peace and its dividends that were supposed to accrue to the poorer countries as a consequence of the ending of the East-West conflict?

The proliferation of armed conflicts, particularly in the Middle East, further undermine the well-being of societies.

According to the United Nations High Commissioner for Refugees (UNHCR), more than 4 million people have left Syria owing to the continued violence in the country. The majority of them live now in shelters and camps as internally displaced persons scattered throughout the region in countries such as Turkey, Lebanon and Jordan.

The world has not witnessed mass exodus of this proportion since the end of World War II.

As the Chairman of the Geneva Centre for Human Rights Advancement and Global Dialogue (Geneva Center), I participated as a panel member in a side-event that was held 06 December 2016 by the Geneva Centre in relation to the 30th anniversary of the adoption of the 1986 Declaration on the Right to Development.

During our panel deliberation, I observed that structural violence and the ongoing-armed conflicts and displacement were in contradiction with the vision expressed by the Declaration on the Right to Development.

The negative impact of violence tramples both human rights to life and to development.

Addressing social tensions requires adopting measures to eradicate poverty, ensure the promotion of employment and decent work, and eliminate the root-causes of inequality. By inequality, one should refer to both inequality in access to public goods, to income and gender inequality.

The realization of the Sustainable Development Goals (SDGs) is a good starting-point. SDG 10 stipulates the need to reduce inequality between and within countries. SDG 8 similarly reminds the world of the importance of promoting sustained, inclusive and sustainable economic growth to eradicate inequality. Lastly, SDG 5 specifies the need to achieve gender equality and empower all women and girls through the elimination of violence and discrimination.

The 2030 Agenda is a bold roadmap for states to foster social cohesion and social harmony.

Another cause of social tension is the application of universal coercive measures. Such measures are discriminatory and hinder the capacity of governments to execute their functions in the interest of their citizens, and very often target the vulnerable segments of populations rather than the elites.

The denial of access to technology, food and patented medicines negatively affects the enjoyment of basic human rights.

Indeed, social development is central to the needs and aspirations of people throughout the world. The aim is to live in a peaceful, just and equitable society that ensures the fair distribution of income, access to resources and equality of opportunities for all.

We need to seize the opportunity to address the causes of social instability and economic backsliding. People must be empowered so as to enable them to realize their potential and take ownership of their destinies.

Identifying, addressing and eradicating the root-causes of social injustice will enable us to promote a more equitable development that puts the human being at the centre, and creates synergies between societal development and human security.

Addressing social injustice is in our common interest to promote a more sustainable international order.

I would like to end this statement by sharing a quote from Martin Luther King Jr:

“Injustice anywhere is a threat to justice everywhere.”