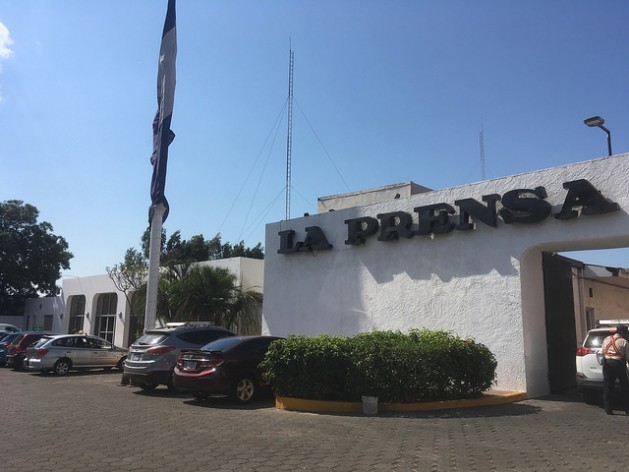 The offices of La Prensa, the oldest newspaper in Nicaragua and the leading media outlet critical of the Daniel Ortega administration, has suffered negative economic consequences as a result, as have other opposition outlets. Credit: José Adán Silva/IPS

MANAGUA, Mar 30 2017 (IPS) - During the 161st session of the Inter-American Commission on Human Rights (IACHR), an empty chair across from the OAS Special Rapporteur for Freedom of Expression, Edison Lanzas, sums up the Nicaraguan government’s relationship with this issue in the country: absence.

At the Mar. 15-22 meeting of the IACHR, an independent Organisation of American States (OAS) body, only Cuba, the United States and Nicaragua were absent from the debate in the review and complaints session, which in the case of Nicaragua dealt with freedom of expression.

It was the third time this Central American country abstained from participating, which according to experts on freedom of expression and journalism conveys a “disregard” by the government towards the media and journalists, ever since leftist President Daniel Ortega returned to power in 2007, after governing the country in the 1980s.

Adrián Uriarte, the dean of the social sciences department in the University of Commercial Sciences, said “freedom of expression is a fundamental human right and goes beyond the media.”

The academic explained to IPS a set of indicators he created to determine the degree of freedom of expression in a country.

The third involves “a citizen’s right to demand accountability from the government and the powers-that-be, including the media.”

"This can be measured by the lack of access to information, zero interviews, zero advertising from the state, control over tax exemptions, and control of social and labour institutions to exert administrative pressure on owners of media outlets.” -- Adrián Uriarte

The fourth relates to “the right to seek and access public information; and the fifth indicator has to do with the exercise of this right in writing, by radio or television, which of course is directly linked to freedom of the press.”

This country “has good grades in the first indicators, in terms of freedom of expression, mostly because in Nicaragua internet use is not yet regulated, and as a result, social networks have become the main new public spaces where citizens exercise their right to freedom of expression,” said Uriarte.

“But journalists and the media are ironically the group that exercises freedom of expression the least in Nicaragua. I would say actually that this is the area where self-censorship is practiced the most,” said the academic.

In Uriarte’s view, the government of Ortega and his wife Rosario Murillo, who became vice president in January, “has a sectarian vision of freedom of the press.”

“There are public policies aimed at promoting technological development and access to information and advertising for public and private media outlets, but which have ties, according to investigative reporting, to the current administration,” he said.

“On balance, we can say that in Nicaragua those who suffer a lack of freedom of expression are private media outlets not influenced by the state,” said Uriarte.

“The most visible form has been denial of this right,” he said.

This “can be measured by the lack of access to information, zero interviews, zero advertising from the state, control over tax exemptions, and control of social and labour institutions to exert administrative pressure on owners of media outlets.”

“It is also seen in the cancelation of private spaces in local newscasts, removal of technical equipment from local radio stations, which has naturally led to the closure of private spaces of opinion due to a lack of economic sustainability for many journalists.”

Newspaper and radio reporter Juan Rodríguez has experienced firsthand the consequences of being considered an “opposition journalist”.

“In 2007 I was communications and press officer for the Executive Secretariat of the National System for Disaster Prevention and Care, when the Sandinista government came into power and they cancelled my contract with no legal justification. They fired me because they suspected that I belonged to the right-wing media,” he told IPS.

Since then, Rodríguez has got around a series of barriers and a lack of institutional support to make radio programmes, while complaining about political harassment for having headed the independent Association of Journalists of Nicaragua.

Journalist Luis Galeano, director of the local radio and television programme Café con Voz, put it like this: “As a journalist I always work thinking whether tomorrow we are going to be able to go on the air.” His programme, broadcast by a local TV station and a network of community radios, is not yet considered “opposition”, but Galeano is worried that any day now the authorities will apply pressure to remove it from the air.

“I don’t know whether the government will all of a sudden get annoyed with what I say or do in my programme and order its closure, or whether business people are going to request that my programme be shut down, or whether they will pressure the few business people that support the media to stop backing us. The truth is that I live in constant worry about whether or not I will remain on the air,” he said.

Dozens of journalists have complained about the same sense of uncertainty, to Nicaraguan human rights lawyer Juan Carlos Arce with the non-governmental Nicaraguan Human Rights Centre.

Freedom of expression, according to the United Nations, is based on “the freedom to seek, receive and impart information.” In the current situation this right is not guaranteed for individual citizens, collectives or independent journalists, due to a secretive government policy,” Arce told IPS.

According to the activist, the 2007 policy is based on the strict control of public information and manifests itself as a gag order for civil servants.

For Arce, the problem of freedom of expression is exacerbated by government control of the media. This, in his opinion, “runs counter to the government’s obligation to promote pluralism and independence in the media.”

In this Central American nation of 6.2 million people, in 2007 there was only one TV channel and one radio station in the hands of the governing Sandinista National Liberation Front (FSLN) , another state-owned station and two other pro-government stations, as well as several others close to the government.

In 2017, according to Arce, more than 80 per cent of the radio stations, TV channels, print media and on-line programmes are under the control of the FSLN, controlled by family members, political operators and like-minded journalists, although some occasionally declare themselves publicly as independent.

“As an advocate, the biggest problem is the lack of information of the institutions and the fact that that many people avoid speaking out because they fear retaliation from the government,” he said.

Arce said the absence of the government in the continental forums to debate on freedom of expression is shown not only by the empty chairs during the 161st session of the IACHR, but also in the countless pronouncements of international bodies on violations of human rights and other universal rights.

To illustrate, Arce mentioned U.N. criticisms in its Universal Periodic Review on Nicaragua in 2014, and other reports issued since 2008 by the U.S. State Department, the European Parliament, the OAS, Human Rights Watch, Reporters Without Borders, the Inter American Press Association, Freedom House, and Amnesty International, among others.