KATHMANDU, Nepal, Mar 20 2017 (IPS) - It is in UN’s long-term interest to gradually reduce its dependence on US funding and undue influence, as proposed by former Swedish Prime Minister Olof Palme 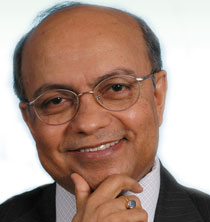 US President Donald Trump’s first budget proposing a 28 percent cut in foreign aid, including drastic reduction in US funding for the United Nations has caused much alarm and anxiety among UN officials. Many enlightened Americans and other citizens of the world who believe in multilateral cooperation to tackle pressing global problems, such as poverty, population growth, climate change, peaceful resolution of conflicts and humanitarian assistance feel dismayed by Trump’s nativistic ‘America First’ chest thumping.

But instead of lamenting and pleading for restitution of proposed cuts, friends of UN should welcome it as a strong incentive for seriously reducing the UN’s over dependence and vulnerability to blackmail by US and occasionally by some other donors.

Part of the response would be for the UN to take a fresh look at a very creative proposal made by former Swedish Prime Minister Olof Palme in 1985 to significantly change the system of financing the UN that would be more sustainable as well as fair and practical.

A great supporter of the UN and a true multilateralist, Olof Palme had the best interest of the UN at heart when he proposed that no member state should be asked or allowed to pay more than 10 to 12 percent of the UN’s core budget. A 10 per cent cap, he reasoned, would limit the UN’s political dependence on its largest contributors.

It is interesting to note that when the Palme proposal was floated in 1985, the US opposed it, fearing that it would lose its leverage over the UN. And other states, particularly the Europeans, balked at the proposal although the increased amounts they would have to pay would have been quite modest. One wonders how the US and other countries would react today, but I believe it is the right time now to explore such alternative.

Ideally, we should also look at some more innovative financing proposals such as the Tobin tax on currency or financial transactions, a carbon tax, taxes on the arms trade, and raising resources from the deep seas and other global commons, which are considered the common heritage of humankind.

But we know that the US and many other states are likely to oppose such schemes as most states want to safeguard their monopoly over taxing powers and will not be keen to give such authority to the UN or anyone else. This must, therefore, remain part of a longer-term agenda.

Today the financing for development landscape is changing rapidly. Many UN activities benefit from private financing and those by philanthropic foundations, NGOs, and increasingly cloud-sourcing and crowd-funding as well as different forms of public-private partnerships. Harnessing such possibilities must also be part of the new UN agenda as recognized in the context of sustainable development goals.

For the past seven decades, funding for the UN’s core budget and peace-keeping operations has been based on an internationally negotiated and agreed system of assessment of each member state’s “capacity to pay”.

Based on this, the US share currently comes to 22 percent of UN’s regular budget and 28% of its peace keeping budget, or approximately $600 million plus $1.1billion respectively per year, for a total of $1.7 billion in absolute amount (not including voluntary contributions and membership fees for specialized agencies).

According to this formula Japan pays 9.7 %, China 7.9%, Germany 6.4%, France 4.9 %, UK 4.5% and Russia 3.1%. Permanent members of the UN Security Council pay a slightly higher percentage for the separate peace-keeping budget.

It should be noted that historically the US paid a much larger share of the UN’s regular budget than it does today. At the time of the founding of the UN when there were only 50 member states, and most European countries were bankrupt after the Second World War, the US paid 49 percent of the UN budget.

As the assessed contributions are mutually agreed and equitable treaty obligations, normally they can only be changed through multilateral negotiations. Sudden, arbitrary and unilateral cuts, like those proposed by President Trump are, therefore, tantamount to violation of the spirit of international treaty obligations.

Regrettably, money and military power often talk louder than democratic norms or treaty obligations in the realpolitik of international relations. Continuation of the undemocratic veto power by the five Permanent Members of the UN Security Council, a legacy of a different era, is the most glaring example of this reality.

Besides the assessed contribution for the UN’s regular budget and peace-keeping operations, the Trump budget proposals pose an even bigger threat to the “voluntary” contributions that the US makes to such UN funds and programs as the UN Population Fund, UNDP, and perhaps even UNICEF.

The threat goes beyond funding to the US backing out of some widely agreed global treaties such as the recent Paris agreement on climate change, the Conventions on the Rights of the Child, and the Convention on Elimination of Discrimination against Women.

Though Trump’s threats and actions are intemperate and extreme, they are not unprecedented. From time to time, members of the US Congress have made threats to cut funding for various UN agencies and programs as their hobby-horse. One of the worst periods in recent memory was during 1995-2001 when Senator Jesse Helms was Chairman of the Senate Foreign Relations Committee.

Indeed, the threat of US funding cuts has been a Damocles’ sword hanging over the UN from the early days of its founding. Occasionally such threat has led to some useful reforms in the UN, including a more stringent review of its budget and operations. But more often it has led to distorting the globally agreed program priorities, and giving undue and unfair advantage to the US in appointment of high-level officials in the UN Secretariat, Specialized agencies and Funds and Programs.

To be fair, it is not only the US but several other major donors too often exert the power of their purse to influence the staffing, election outcomes and policy priorities of the UN. Sometimes even lesser powers like oil-rich Qatar and Saudi Arabia exercise what is known as “cheque-book diplomacy” to buy undue influence in UN reports and decision-making.

Like our national governments and other public as well as private institutions, the UN is not perfect. Those of us who have worked in the UN system would acknowledge that there certainly are many inefficiencies and waste in the UN system that need to be fixed. But big powers unilaterally flaunting their power of the purse to dictate their brand of reform will make the UN weaker, not stronger.

The totality of the UN system’s budget and expenditure for humanitarian assistance, development cooperation, peace-keeping operations, technical assistance and other essential normative functions, amount to about $48 billion per year. In the larger scheme of international finance, in a world economy of $77 trillion and global military budgets of $1.7 trillion per year, this is a modest amount to respond to the huge challenges that the UN is asked and expected to help tackle. The total UN system-wide spending annually is less than the defense budget of India or France, and less than one month’s US spending on defense.

With similar investment, bilateral aid and national budgets of much bigger proportions could hardly achieve results comparable to what the UN and international financial institutions achieve.

Wiser and more enlightened American leaders recognize this. In today’s world, America cannot be a walled, fortified and prosperous island. In a world where epidemic diseases respect no boundaries, and do not need a passport or visa to travel, nor does the impact of global warming and climate change, America’s security is inter-dependent on global human security. America’s own military leaders argue that ruthlessly cutting foreign aid and throwing more money for the military cannot enhance America’s security.

But lacking humility and sagacity, Trump and his associates seem to prefer pumping more money into the military machine. Trillions of dollars that US invested in military ventures in Iraq, Afghanistan and elsewhere have brought little tangible benefits to the US or to world peace and security.

There is no evidence to believe that a whopping increase in the already bloated military budget, homeland security and building border walls will make America safer from terrorism or other threats to its security. Mr. Trump should listen to the wise words of fellow billionaire Bill Gates who says: “The world will not be a safer place if the US stops helping other countries meet their people’s needs”.

The UN certainly has its work cut out to reform itself constructively, and to come up with more durable and reliable funding alternatives to protect itself from the whims of future Trumps elsewhere. The visionary Olof Palme proposal can be one part of the solution along with other innovative measures that Secretary-General Antonio Guterres and his team must be contemplating.