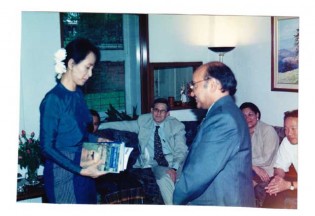 By Kul Chandra Gautam
The 1 February 2021 coup d’état by Myanmar’s military (Tatmadaw), has been widely condemned by all the world’s democratic leaders, human rights activists and genuine friends of the people of Myanmar around the globe. In an unusual manner for the world’s top diplomat, UN Secretary-General Antonio Guterres has gone so far as to urge the world community to make sure that Myanmar's military coup fails.

By Kul Chandra Gautam
I have had 5-decade long and happy association with the Peace Corps since I was a 7th grade student in the hills of Nepal. My wonderful Peace Corps teachers were instrumental in helping transform my life. And the 4000+ Peace Corps Volunteers who have served in Nepal have contributed immensely to my country’s development.

By Kul Chandra Gautam
The United Nations is faced with a financial crisis once again. Leaders of as many as 64 countries who paraded and pontificated at the UN General Assembly and its multiple Summit meetings in September 2019 were deadbeats, who had not paid their dues in full to the UN for this year.

By Kul Chandra Gautam
Pele’s example has inspired millions of young people to join the ‘beautiful game’ and contribute to building a peaceful and prosperous world fit for all our children.

By Kul Chandra Gautam
As a member of OXFAM GB's Council of Trustees since 2014, I have received many queries about the recent scandal concerning sexual misconduct committed by some OXFAM staff in Haiti in 2011 and elsewhere. I appreciate the concerns expressed as well as many messages of solidarity and support for OXFAM in the face of the relentless onslaught of criticism – both fair and foul.

By Kul Chandra Gautam
It is in UN’s long-term interest to gradually reduce its dependence on US funding and undue influence, as proposed by former Swedish Prime Minister Olof Palme

By Kul Chandra Gautam
On 1 October 2015, Somalia ratified the UN Convention on the Rights of the Child (CRC), leaving the United States of America as the only remaining member state of the UN not to embrace this most universally accepted human rights treaty. UN Secretary-General Ban Ki-moon reflects the sentiments of all the world’s human rights activists in encouraging the US to join the global community by ratifying this noble treaty.

By Kul Chandra Gautam
After a decade of violent insurgency, followed by another decade of chaotic transition, Nepal promulgated its new constitution on Sept. 20, 2015. Immediately afterwards, the U.N. issued a rather terse statement attributed to Secretary-General Ban Ki-moon that merely “acknowledged” the adoption of the constitution, without any congratulatory warmth.

By Kul Chandra Gautam
The life and times of former British Prime Minister Margaret Thatcher who died two weeks ago, evoke many strong sentiments among her supporters and detractors. I was not one of her fans. As someone with social-democratic leanings, I detested her tough conservative policies. Nicknamed the "Iron Lady", her leadership style was harsh and uncompromising. Her socio-economic policies known as “Thatcherism”  emphasized deregulation of the economy, less government, lower taxes, privatization of state-owned companies, more freedom for business and consumers, and weakening the power and influence of trade unions.
ADVERTISEMENT ADVERTISEMENT