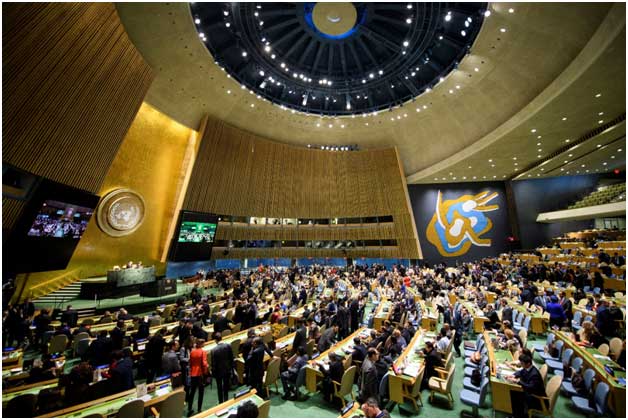 KATHMANDU, Nepal, Oct 11 2019 (IPS) - The United Nations is faced with a financial crisis once again. Leaders of as many as 64 countries who paraded and pontificated at the UN General Assembly and its multiple Summit meetings in September 2019 were deadbeats, who had not paid their dues in full to the UN for this year.

Many have been in arrears for multiple years. Those include not just poor and war-torn countries in crisis but many wealthy countries such as the United States, Israel, Saudi Arabia, South Korea, Oman, and Nigeria whose ambassador presides over the UN General Assembly this year.

This is not a new phenomenon. UN has been in serious financial crisis before. And once every decade or so the crisis becomes alarming as it seems to be at present.

We are told that the UN Secretariat could face a default on staff salaries and payments for goods and services by the end of November 2019 unless more Member States pay their budget dues in full.

To address the crisis, the Secretary-General has taken various steps including reduction in official travel; postponing spending on goods and services; discontinuing events outside official meeting hours, and possibly considering postponement or even cancellation of meetings and conferences mandated by the General Assembly. Previous Secretaries-General also had to resort to such measures.

Faced with similar circumstances, many bold proposals were made to resolve the crises in the past. But the fate of such proposals always ended up in resorting to short-term, stop-gap, compromise solutions.

As his predecessors have done in the past, Secretary-General António Guterres wrote a letter to all Member States on the 7th of October 2019 to apprise them of the imminent financial crisis and appealed for their help to resolve it.

What is new in the S-G’s most recent letter to Member States is an explicit acknowledgment that “this is a recurrent problem that severely hampers the Secretariat’s ability to fulfil its obligations to the people we serve”.

He went on to say that he “looks to Member States to resolve the structural issues that underlie this annual crisis without further delay”.

It is my considered view that the time has come for the Secretary-General himself to exercise bolder leadership and make some specific proposals, and not just to “look to Member States to resolve the structural issues that underlie the crisis”.

Precisely because there are structural issues and strong vested interests, Member States by themselves are unlikely to come up with solutions that require bold, innovative and even non-conventional approaches.

Everybody says UN needs reforms. But the kind of reforms that are proposed by Member States are often timid and inadequate, and in the case of those proposed by some, e.g. the Trump administration, they are actually harmful and contrary to the multilateral ethos of the United Nations. Such proposals are unlikely to command broad-based support.

It is time for the Secretary-General himself to take the initiative and commission a high-level panel to propose a more predictable and sustainable funding of the UN.

The 75th anniversary of the UN in 2020 is a perfect occasion for the S-G to present a bold proposal for a more sustainable funding mechanism for the UN in keeping with the ambitious Sustainable Development Agenda for 2030 that the UN has championed so boldly.

What might be some elements of the proposal that the S-G can present? I made a humble proposal in 2017 when the Trump administration first proposed its sweeping cuts to the UN budget and aid for international development: http://kulgautam.org/2017/03/20/responding-to-us-budget-cuts-for-united-nations/.

This proposal was further dissected in an Inter Press Service article in December 2018 by several scholars and diplomats with deep knowledge and affinity with the UN : http://www.ipsnews.net/2018/12/time-end-cheque-book-diplomacy-un/

Here are two key elements that stand out for the S-G’s consideration: 1) resurrect, revise and reformulate the 1985 proposal by the late Swedish Prime Minister Olof Palme who recommended capping the share of any member state to 10 percent of the organization’s assessed contributions, and 2) seriously explore some innovative financing arrangements such as the Tobin tax on currency or financial transactions, a carbon tax, taxes on the arms trade, and raising resources from the deep seas and other global commons, which are considered the common heritage of humankind.

It is worth remembering that the cap proposed by Palme was intended to reduce the UN’s excessive dependence on funding by the US and a fistful of big donors. The spirit of the Palme proposal was to protect the UN from being unduly influenced by and vulnerable to the whims of such donors.

Any shortfall caused by capping the US contribution to the UN can and ought to be made up by other members of the Organization of Economic Cooperation and Development (OECD), and the large number of middle-income emerging economies, without putting undue burden on the world’s low-income countries and LDCs.

It is worth recalling that in the larger scheme of international finance, in a world economy of $88 trillion and global military budgets of $1.8 trillion per year, the UN’s regular annual budget is only $3.3 billion, and the totality of the UN system’s budget for humanitarian assistance, development cooperation, peace-keeping operations, technical assistance and other essential normative functions, amounts to less than $50 billion per year.

This is a modest amount to respond to the huge challenges that the UN is asked and expected to help tackle.

To put it in perspective, the total UN system-wide spending annually is less than the defense budget of India or France, and less than one month’s US spending on defense.
With similar investment, bilateral aid and national budgets of much bigger proportions could hardly achieve results comparable to what the UN and international financial institutions achieve.

On the idea of exploring alternative innovative funding, it is useful to recall that financing for development landscape is changing rapidly. Many UN activities already benefit from private sector financing and philanthropic foundations. Many NGOs rely increasingly in cloud-sourcing and crowd-funding as well as different modalities of public-private partnerships.

Harnessing such possibilities and expanding its sphere of partnerships must also be part of the UN’s own sustainable funding agenda as recognized in SDG-17.

We know that the US and many other states are likely to oppose such schemes as most states want to safeguard their monopoly over taxing powers and will not be keen to give such authority to the UN or anyone else.

Many governments would also be fearful of UN mobilizing funding from non-conventional sources that they cannot control.

However, I see no reason why the UN should not judiciously explore such funding options – not to replace core funding by Member States, but to complement it.

After all, the UN is supposed to be an organization of “We the Peoples”, not just “We the Governments”. Historically, it is often the people’s movements that have helped the UN to set ambitious and futuristic agenda, such as on human rights, social justice, and climate change, often defying the resistance of some powerful as well as many power-hungry governments.

To his credit, Guterres has dared to push the agenda of addressing the climate crisis, universal health coverage – including sexual and reproductive health and rights – and several other measures despite known objections by some powerful Member States, including the US.

While actual progress has been limited, and the S-G does not have the power or the resources to force changes, the bully pulpit of the world’s top and most visible diplomat needs to be harnessed for the greater good of humanity.

Dag Hammarskjold and Kofi Annan dared to take bold leadership despite great odds, and history has judged them well.

I would urge António Guterres to come up with some bold proposals for sustainable funding of the UN on the occasion of its 75th anniversary in 2020. This could be one of his lasting legacies as the Secretary-General of the SDG-era.