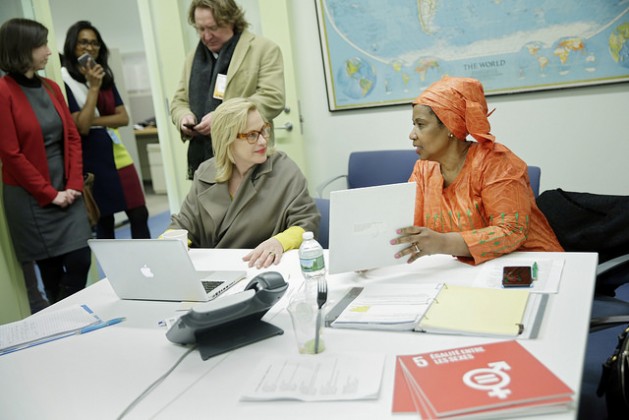 During the 61st session of the Commission on the Status of Women (CSW) meeting, UN Women and the International Labor Organisation (ILO) launched the high-profile Equal Pay Platform of Champions to raise awareness on the persistent gender wage gap.

“There has been a normalization for centuries of a bias against women, an acceptance that we are less than…there is no woman that [the wage gap] does not affect,” Lopez said as she moderated the launch.

UN Women’s Executive Director Phumzile Mlambo-Ngcuka echoed similar sentiments, stating that such bias has led women’s work in a range of sectors to be undervalued.

“What does a woman in Wall Street have in common with a woman who has a shop in Brazil? Or in a cane farm in South Africa? Or in a sweatshop in Bangladesh? Chances are that they are all not paid equally by their different employers,“ said Mlambo-Ngcuka to delegates in the filled General Assembly Hall.

Globally, the gender pay gap is at approximately 23 percent as women make 77 cents for every dollar earned by men.

The figure is even higher in some regions and among certain communities. In the U.S., African American women earn only 60 cents, Native American women 59 cents and Hispanic women 55 cents for every $1 that white men earn. In Turkey, women earn up to 75 percent less than their male counterparts.

“What does a woman in Wall Street have in common with a woman who has a shop in Brazil? Or in a cane farm in South Africa? Or in a sweatshop in Bangladesh? Chances are that they are all not paid equally by their different employers,“ -- Phumzile Mlambo-Ngcuka

Retired U.S. soccer player Abby Wambach shared her story and reasons for joining the Platform of Champions, stating: “I have two gold medals, I won a World Cup with my country…but I actually have to worry about paying my bills now.”

Before the enactment of Title IX, which guarantees that no person in the U.S. can be discriminated on the basis of sex in education receiving federal funds, opportunities for women in sports were extremely limited as women received only two percent of academic athletic budgets. It has since increased to 40 percent due to the law, but its existence is now threatened by the new administration.

Garment and Allied Workers Union’s President Anannya Bhattacharjee shed light on the plight of garment workers around the world, including those in Asia who are responsible for the production of over 60 percent of the world’s garments.

Bangladesh alone, which is the world’s second largest textile industry, earns more than $25 billion a year from exports and employs over 4 million workers, the majority of whom are women.

“The workers of this industry who are mainly women cannot access their basic human rights…industries that are dominated by women tend to be lower paid, which means that millions of women and generations of families live in poverty,” said Bhattacharjee.

In December, protests erupted in the South Asian nation as garment workers took to the streets to demand a monthly minimum wage increase from 67 dollars to 187 dollars. The call was dismissed, more than 1500 workers were fired, and over 40 arrested.

Bhattacharjee highlighted the need for a living wage, and to recognize the additional unpaid labor that women often take up to care for their families.

ILO estimates that it will take 70 years to close the gender wage gap at the current rate while the World Economic Forum warned that it could take 170 years for women and men to be paid the same for equal work due to reversed progress over the last few years.

Governments also joined in the call to action, including the Government of Iceland who recently became the first country to require equal pay for all.

“We had laws banning pay discrimination since 1961 in Iceland. Still, even though we are leading in equality, we still have a gender pay gap of around 7 percent. And that’s absolutely intolerable,” said Iceland’s Social Affairs and Equality Minister Thorsteinn Viglundsson.

The country says it wants to eradicate the gender pay gap by 2022.

Mlambo-Ngcuka noted the need for a comprehensive response to the complex wage inequality issue including by providing education to promote a shift in societal norms and sharing best practices from around the world to push for laws similar to those of Iceland.

“We can no longer afford to stand by and allow these deeply entrenched discriminations to persist…Every one of us can be a champion for women and girls. There are no superpowers necessary,” Lopez said.

CSW is the largest inter-governmental forum on women’s rights. The Equal Pay Platform of Champions is a part of the broader UN Women-ILO led Global Equal Pay Coalition that helps create concrete targets and laws to reduce the gender pay gap by 2030 at the global, regional and national levels.