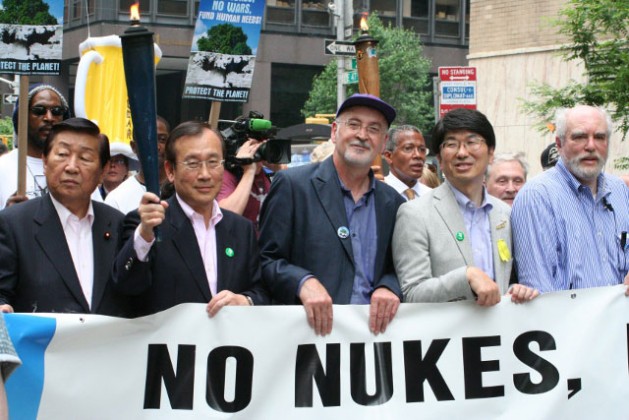 VICTORIA, BC, Canada, Apr 24 2017 (IPS) - When the United Nations continues its negotiations in June for an international treaty against nuclear weapons, there must be a treaty that should cover every single aspect of the devastating weapons — and leading eventually to their total elimination from the world’s military arsenals.

As envisaged, the treaty should not only prohibit stockpiling; use and threat of use, and planning for use of nuclear weapons but also the deployment; transfer, acquisition, and stationing; development and production of these weapons—along with testing; transit and transshipment; and financing, assistance, encouragement, and inducement and an obligation for the complete elimination of nuclear weapons and a framework to achieve it.(WILPH, Reaching Critical Will).

As Eva Walder, the Swedish representative to the UN’s First Committee on Disarmament and International Security, declared: “Sweden’s position is clear. The only guarantee that these weapons will never be used again is their total elimination.”

Through the current negotiations, there is the global opportunity to speak truth to power, to save the world from the scourge of war and to prevent and remove the threats to peace.

The US has stated that the treaty to ban nuclear weapons would be ineffective, with adverse consequences for security and would hinder the implementation of Article VI of the US constitution on international treaties.

It is, rather, NATO`s nuclear policy which contravenes Article VI, as well as some of the Thirteen Steps Towards Nuclear Disarmament, and has consequences for common security:

1) nuclear weapons must be maintained indefinitely
2) We will improve their use and accuracy (modernize them)
3) We can use them first.
4) We can target non-nuclear weapon states
5) We can threaten to use them
6) We can keep them in Europe, as they are now doing
7) We can launch some on 15 minutes warning.
8) We say “they are essential for peace
(Murray Thompson, Canadian for a Nuclear Weapons Convention)

In October 17 2016, prior to the vote of the Open Ended Working Group (OEWG) on Nuclear Weapons, the US circulated a “non-paper“, to NATO and its allies on potential negative impacts of starting negotiations for a nuclear ban treaty and wrote,“ for the allies, participating in the OEWG , we strongly urge you to vote no on any vote at the UN First Committee on starting negotiations for a nuclear ban treaty.“ http://www.icanw.org/wp-content/uploads/2016/10/NATO_OCT2016.pdf

Subsequently, in the October 27 2016 meeting of the OEWG, the US Intervention appeared to work. Only the Netherlands did not vote no. On December 23, 2016.the United Nations General Assembly (UNGA) approved a significant resolution to launch negotiations in 2017 on a treaty prohibiting nuclear weapons.

The resolution was adopted by a large majority, with 113 UN member states voting in favour, 35 voting against and 13 abstaining. Support came from every continent, except Australia, and represented the range of legal systems. It thus fulfilled the criteria for a peremptory norm.

The US appears, however, to have provided a script for the US allies voting on the nuclear ban treaty; most of them gave the reason for voting against the resolution as being, “the US nuclear weapons are essential for its security and they have refused to declare that nuclear weapons should never be used”. Perhaps “security” needs to be redefined not distorted by the US weapons industry.

The aforementioned October 17 2016 letter to the NATO and the script for allies at the UNGA, continues the practice of the US “influencing“ votes through financial incentives, threats, or intimidation (FITI),

For example, in 1990, only two countries on the UNSC opposed the passage of US Resolution 678, and when Yemen cast one of these votes, the U.S. Ambassador threatened him: “that will be the most expensive vote you ever cast,” and the U.S. immediately cut off aid to Yemen.

In 2003, several UNSC non-permanent members who opposed the US` proposed intervention in Iraq, suddenly came out with a US script supporting the invasion of Iraq. In addition, in 2003, the US sent a letter, described as an ultimatum, to all the members of the UNGA pressing them to not support the call for an emergency session of the UNGA to oppose the invasion of Iraq.

The data, based on UNGA voting patterns, provided in the International Campaign Against Nuclear Weapons (ICAN) document of participants in the March negotiations, indicates that there were 138 “supportive” states, one “not supportive” state (Japan), and 13 “not clear” states

The ICAN data on voting patterns of participants who did not attend the March negotiations indicate 14 were “supportive, five were “not clear”, 27 NATO states were “not supportive,” along with the other non-NATO nuclear weapons states (Russia, China, Israel, India, Pakistan and other US allies from NATO along with Japan, and South Korea, http://www.icanw.org/

If the 14 supportive states attend the upcoming June 15– July 7 meeting, there will be around 143 “supportive` states” (70% of the 193 member states of the United Nations). This would be the case, provided the US does not threaten or offer financial incentives and persuade them to claim “that the US nuclear weapons are essential for its security and has refused to declare that nuclear weapons should never be used”`.

If there is a positive vote in the UNGA, the US and the four other permanent members will try to block decision through taking any UNGA decision to the UNSC. With the current composition of the UNSC, the nuclear powers will be able to get “not supportive” votes from only three non-permanent members: Italy, Japan and Ukraine.

This is assuming that Bolivia Egypt, Ethiopia, Kazakhstan, Senegal. Sweden, and Uruguay will not be coerced into renouncing their former supportive positions for a treaty for the abolition of nuclear weapons. If the required number of nine votes does not oppose the treaty, the UNSC would fail to make a decision. Then there is a precedent in the 1950 “Uniting for Peace Resolution” and the decision could pass back to the UNGA. http://www.un.org/en/sc/repertoire/otherdocs/GAres377A(v).pdf

In the Preamble to the Charter of the United Nations, there is a call to save succeeding generations from the scourge of war – and “to maintain international peace and security, and to that end: to take effective collective measures for the prevention and removal of threats to the peace”…

In 2017, the Bulletin of Atomic Scientists moved the Doomsday clock to two and one half minutes to midnight because of the threats arising both from nuclear weapons and climate change. The funds thus saved from ending the production of nuclear weapons could be transferred to fully implement the UN Framework Convention on Climate Change.