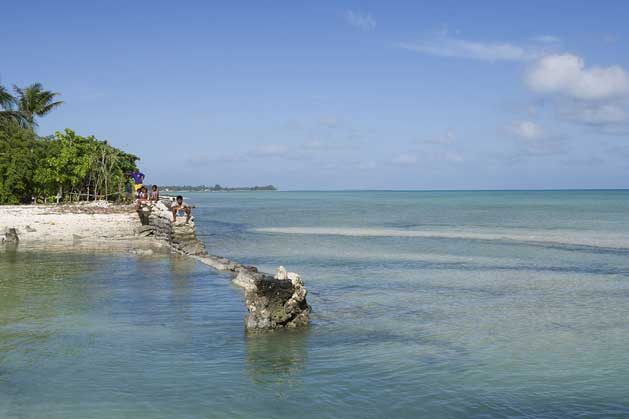 UNITED NATIONS, Jun 8 2017 - The Group of 77 has expressed its strong support for a “Call for Action,” adopted at the end of the UN conference on Oceans in early June, which commits member states to move forward in their attempts to conserve and sustain the use of marine resources.

Speaking on behalf of the G77, joined by China, Foreign Minister Maria Fernanda Espinosa of Ecuador, told delegates it is essential to embark collectively in building commitments and in taking actions beyond those mentioned in the Call for Action.

This should be achieved “either by establishing voluntary commitments or by fostering measures in our daily life activities, that would allow us to contribute to the conservation and sustainable use of the Ocean and to ensure that it supports the needs of present and future generations.”

She said: “We sincerely hope that all the commitments adopted in this Conference and the ones formulated beyond are immediately put into practice with the participation and involvement of all citizens of the world, starting with us, as representatives of States, advocate for the well-being and common good of humanity and the planet.”

She pointed out that the Ocean is “an important part of our cultural and natural heritage, it is an interconnected body of water that covers over 70% of our planet, that support the well-being and livelihoods of humans and animals by providing water and oxygen, food security, employment, protection from natural disasters, other benefits fundamental to us.”

“We must take ambitious actions to sustain and conserve the Ocean for future generations, preventing its exploitation, contamination and other harmful activities that impair its irreplaceable role in the Planet,” the Foreign Minister declared.

The Group of 77 believes that for a successful implementation of SDG 14, it is necessary to take into account the 2030 Agenda for Sustainable Development as the overarching framework of the goal; while underscoring the integrated, indivisible and universal nature of the SDGs, specially SDG 14, restating the importance of its linkages, and balancing the three dimensions of sustainable development, which is essential to live in harmony with nature.

Accordingly, it is imperative that the actions taken for the conservation and sustainable use of the Ocean are guided by the Agenda, especially by the principles reaffirmed therein, she added.

“The wide economic and development differences between states in order to address the conservation and sustainable use of the Ocean must be taken into account; and we ought to recognize that we have common but differentiated responsibilities with the world and in relation with global environmental issues”.

She urged developed countries to take the lead in addressing the challenges of the Ocean and in providing support by enhancing the capabilities of countries that are unable to engage in the implementation of SDG 14, bridging the gap of available resources that constrains the actions that needed to be taken.

“In order to ensure that all countries are able to implement the goal and its targets, we need to consolidate a revitalized global partnership”.

She said the role of international cooperation for development to foster mobilization of domestic resources is crucial to ensure that no one is left behind and that all countries are able to work together for the lasting protection of the planet, the Ocean and its natural resources.

Partnership would also provide the necessary means of implementation, like predictable and adequate financial resources, the transfer of environmentally sound technologies to developing countries on favorable terms, including on concessional and preferential terms, as mutually agreed, capacity building and the sharing of knowledge to States that lack the means to fully address the state of the Ocean.

She said the Group reiterates the importance of and the need for these tools, to ensure that we are all on the same track and adequately capable and equipped to protect the Ocean from degradation.

Stressing the link between oceans and climate change, she said the Group acknowledges that the Ocean is closely linked with the atmosphere, with both influencing the other; that Ocean is the primary regulator of the global climate and an important sink for greenhouse gases, since absorbing one quarter of all carbon dioxide released by human activity.

“By now, we all know that the adverse effects of climate change on oceans are likely to have profound and unpredictable dire consequences for marine organisms and ecosystems, with huge costs in the long run for humanity if we do not take immediate actions.”

“The preservation of the Ocean depends solely on our actions and on the reduction of emissions of carbon dioxide into the atmosphere, as it impairs the role and health of the Ocean and exacerbates the effects of climate change. “
She also said that the long-term protection and sustainable management of the Ocean’s health is critical to build the resilience of Ocean ecosystems. In this regard, the effective implementation of the Paris Agreement, under the United Nations Framework Convention on Climate Change (UNFCCC), is instrumental, recognizing that the UNFCCC is, and should remain, the primary international, intergovernmental forum for negotiating the global response to climate change.