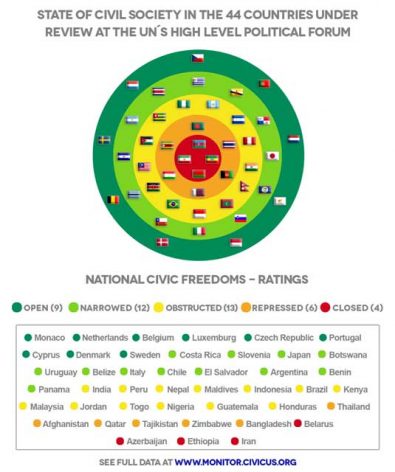 NEW YORK, Jul 26 2017 (IPS) - Recent protests in Ethiopia have seen people demonstrate in their thousands, angry at their authoritarian government, its favouritism towards those close to the ruling elite, and its failure to share the country’s wealth more equally.

The response of the state, in a country where dissent is simply not tolerated, has been predictably brutal: at the height of protests last year hundreds of people were killed, and a staggering estimated 24,000 were arrested, many of whom remain in detention today.

Perhaps not many of those marching in Ethiopia were aware of Goal 16 of the Sustainable Development Goals (SDGs), which is dedicated to the promotion of peaceful and inclusive societies with provisions to protect civic freedoms, ensure equal access to justice and uphold the rule of law.

Clearly, in countries like Ethiopia, the current reality falls a long way short of these basic standards: if people felt that the government was listening to them and they could take part in making the decisions that affect their lives, they wouldn’t have protested in such large numbers.

If fundamental freedoms were upheld, including the essential civil society rights of association, peaceful assembly and expression, then people wouldn’t have been met with mass killings and detentions. It is no surprise that on the CIVICUS Monitor, a new online platform that assesses the space for civil society – civic space – in every country of the world, Ethiopia is rated in the worst category, as having an entirely closed civic space.

It’s a matter of disappointment for civil society that progress on Goal 16 was not one of the goals reviewed by the governance body of the global goals at last week´s High Level Political Forum, which convened all UN member states and leaders from across sectors to review goal progress. A common concern amongst the 2,5000 civil society representatives that attended the global forum is that without progress on Goal 16, all the other goals cannot be achieved. And Goal 16 can only be realised if the role of civil society is respected and civic freedoms are protected.

On this score, two years into the Sustainable Development Goals, the early signs are worrying. Of the 44 countries whose progress was checked, four of them – Azerbaijan, Belarus and Iran, alongside Ethiopia – have entirely closed civic space, according to CIVICUS Monitor ratings. A further 18 countries, ranging from Afghanistan to Zimbabwe and from Brazil to Thailand – are rated as also having serious civic space restrictions. Only ten countries are assessed as having entirely open civic space.

The fact that there are worrying levels of restrictions placed on civil society in over three quarters of the countries up for review in New York indicates that civil society’s ability to realise Goal 16 is being hampered, and potential for SDG progress is being lost.

The SDGs must go further than their predecessors, the Millennium Development Goals (MDGs), which enabled governments to receive praise for making advances on a narrow set of indicators even while they were cracking down on fundamental freedoms: Ethiopia, for example, was rated highly for its MDG performance, alongside other countries where civic space is heavily restricted. It must be remembered that the promise of the SDGs is to be much more ambitious than the MDGs, and to advance social justice and human rights.

The ambition of the SDGs calls for everyone – governments, businesses and civil society – to play their part; the agenda is too big for any one sector to deliver on its own. But when civil society is being constrained – including widespread restrictions on the ability of civil society organisations (CSOs) to receive funds and organise the masses – then its capacity to help deliver the Sustainable Development Goals at the community level is severally limited.

Goal 16 must be on the agenda whenever countries meet to evaluate progress on the SDGs. As of now it is only scheduled to be reviewed in 2019. The key test for Goal 16, for Ethiopia’s citizens, and the many other countries with restricted civic space, is if people are able to freely express their opinions, protest in peace and promote the interests of their communities without fear of persecution. On these measures, the Sustainable Development Goals still have a long way to go.