UNITED NATIONS, Jul 4 2017 (IPS) - A decade ago, it was difficult to get Western policy makers in governments to be interested in the role of religious organizations in human development. The secular mind-set was such that religion was perceived, at best, as a private affair. At worst, religion was deemed the cause of harmful social practices, an obstacle to the “sacred” nature of universal human rights, and/or the root cause of terrorism. In short, religion belonged in the ‘basket of deplorables’. 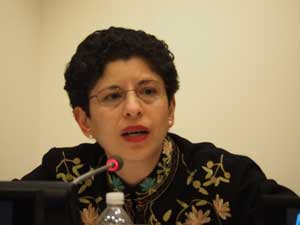 Yet, starting in the mid-1990s with then President of the World Bank, James Wolfenson, and celebrated in 2000 under then UN Secretary-General Kofi Anan when the Millenium Development Goals were agreed to, a number of religiously-inspired initiatives coalesced, all trying to move ‘religion’ to international development’s ‘basket of desirables’.

The arguments used to begin to generate positive interest in the role of religious NGOs in international multilateral fora were relatively straightforward. Today they are almost a cliche: religious institutions are the oldest social service providers known to human kind, and several basic health and educational institutions of today, are administered or influenced to some extent, by religious entities.

So if we are serious about strengthening health systems and universal access to healthcare, enhancing educational institutions, content and accessibility, protecting our environment, safeguarding the rights of marginlised and vulnerable populations, countering social exclusion and ensuring human dignity, then – the argument is – we have to work with those who influence minds, hearts, and continue to provide and manage significant amounts of social services in most countries. Facts and figures as to how many social services are provided by/through religious institutions continue to be provided and roundly disputed.

The number of initiatives within the secular multilaterals – like the UN – which focused on ‘religion and development’ began to slowly attract the attention (and the money) of some western donor governments such as Switzerland and Norway, both of whom were keen on mobilising religious support for women’s rights in particular. Some governments (such as the USA and the UK) dabbled in engaging with religious NGOs both at home in their own countries, and supporting some of them in their development and humanitarian work abroad.

Nevertheless, from a multilateral perspective, the larger tapestry of western donor support to efforts around religion, tended to be marginal – dipping toes in the water rather than taking a plunge.

With the increasing presence of al-Qaeda on the world stage in 2001, and the subsequent war in Iraq and Afghanistan, the world witnessed the emerging gruesome hydras of religious extremism, at once fueling, and being fueled by, the phenomena of ultra nationalism, racism, xenophobia and misogyny. Some western governments spoke openly of engaging religious actors in counter-terrorism, but this narrative was fraught with political tensions.

It was only when migrants appeared to ‘flood’ European shores (albeit in numbers which are only a fraction of those ending up in developing countries), that there was a noticeable surge of keen interest by several western governments in ‘this religion thing’.

For the UN developmental entities who had invested significantly to generate the interest of their largest western donors in the relevance of religions to development, spurred by the learning from the MDGs and with a view to realizing Agenda 2030, there was a noticeable volte face which was taking place right under their noses.

Almost overnight, UN-steered initiatives to engage with religious actors and enhance partnerships around health, education, environment, women’s rights, humanitarian work, all of which had been painstakingly prepared and backed by years of research, consultations, networking and shared practice (as the work of the UN Interagency Task Force on Religion and Development testifies) became the object of desire by some governments.

Rather than seek to support the UN in continuing to engage with this work and the critical partnerships developed and labored over for years, however, the objective of these governments is to seek to directly manage the convening, networking and funding roles of faith-based entities, ostensibly with the same objectives of achieving the SDGs.

But there is a critical difference between the UN convening and working with faith-based organizations and religious leaders, and one or a handful of governments doing so. To survive, to thrive, and to protect human rights, the agenda of multilateral entities has to remain distinct from the national self-interest of any one government – or a handful thereof – no matter how powerful this government (or these governments), may be.

This applies to all issues, constituencies and types of partnerships outlined in SDG 17. But the argument here is even more powerful: that where religions are concerned, the need for unbiased and non-partisan engagement with religious actors, distinct from any one nation’s self-interest, is crucial.

This question becomes especially pertinent when we begin to look at the religious composition of the western governments now keen on ‘supporting religion and development’ abroad – they are mostly Christian. And if we look at the governments viewed with much suspicion who have long been supporting religious engagement overseas (also for development and humanitarian purposes, one might add), they tend to be Muslim. A coincidence perhaps?

To avoid these kinds of questions, it would behoove all concerned parties interested in achieving the significant targets of the Sustainable Development Goals, and with a view to endorsing the United Nations’ mandate of safeguarding peace and security and protecting human rights, to support the efforts of the UN system in engaging the whole of civil society.

Rather than efforts driven by some governments, to work with select religious actors, in some countries, the challenge (which is fully achievable) is to strengthen the multi-faith and broad-based civic coalitions of legally registered, bona fide NGOs, working with and known to their governments and to the UN entities, at national, regional and global levels, to deliver for the world.

Otherwise, the danger is that such efforts will be misconstrued as the new colonial enterprise in international development, playing into rising religious tensions globally. History is replete with examples where mobilizing religious actors in other countries, no matter how well-intentioned, can create some rather unholy alliances.