Out of Africa: Understanding Economic Refugees 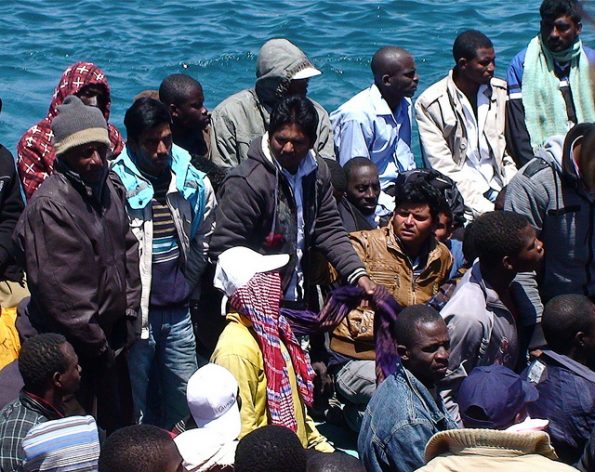 SYDNEY and KUALA LUMPUR, Sep 19 2017 (IPS) - Not a single month has passed without dreadful disasters triggering desperate migrants to seek refuge in Europe. According to the International Organization for Migration (IOM), at least 2,247 people have died or are missing after trying to enter Europe via Spain, Italy or Greece in the first half of this year. Last year, 5,096 deaths were recorded.

The majority – including ‘economic migrants’, victims of ‘people smugglers’, and so on – were young Africans aged between 17 and 25. The former head of the British mission in Benghazi (Libya) claimed in April that as many as a million more were already on their way to Libya, and then Europe, from across Africa.

Why flee Africa?
Why are so many young Africans trying to leave the continent of their birth? Why are they risking their lives to flee Africa?

Part of the answer lies in the failure of earlier economic policies of liberalization and privatization, typically introduced as part of the structural adjustment programmes (SAPs) that many countries in Africa were subjected to from the 1980s and onwards. The World Bank, the African Development Bank and most Western donors supported the SAPs, despite United Nations’ warnings about their adverse social consequences.

SAP advocates promised that private investment and exports would soon follow, bringing growth and prosperity. Now, a few representatives from the Washington-based Bretton Woods institutions admit that ‘neoliberalism’ was ‘oversold’, condemning the 1980s and 1990s to become ‘lost decades’.

While SAPs were officially abandoned in the late 1990s, their replacements were little better. The Poverty Reduction Strategy Papers (PRSPs) of the World Bank and IMF promised to reduce poverty with some modified policy conditionalities and prescriptions.

Meanwhile, the G8 countries reneged on their 2005 Gleneagles pledge to provide an extra US$25 billion a year for Africa as part of a US$50 billion increase in financial assistance to “make poverty history”.

Poor Africa
Thanks to the SAPs, PRSPs and complementary policies, Africa became the only continent to see a massive increase in poverty by the end of the 20th century and during the 15 years of the Millennium Development Goals. Nearly half the continent’s population now lives in poverty.

According to the World Bank’s Poverty in Rising Africa, the number of Africans in extreme poverty increased by more than 100 million between 1990 and 2012 to about 330 million. It projects that “the world’s extreme poor will be increasingly concentrated in Africa”.

The continent has also been experiencing rising economic inequality, with higher inequality than in the rest of the developing world, even overtaking Latin America. National Gini coefficients – the most common measure of inequality – average around 0.45 for the continent, rising above 0.60 in some countries, and increasing in recent years.

While the continent is experiencing a ‘youth bulge’, with more young people (aged 15-24) in its population, it has failed to generate sufficient decent jobs. South Africa, the most developed economy in Sub-Saharan Africa (SSA), has a youth unemployment rate of 54%.

The real situation could be even worse. Discouraged youth, unable to find decent jobs, drop out of the labour force, and consequently, are simply not counted.

Annual growth rates have often exceeded 5% in many African countries in the new century. SAP and PRSP advocates were quick to claim credit for the end of Africa’s ‘lost quarter century’, arguing that their harsh policy prescriptions were finally bearing fruit. After the commodity price collapse since 2014, the proponents have gone quiet.

With trade liberalization and consequently, greater specialization, many African countries are now even more dependent on fewer export commodities. The top five exports of SSA are all non-renewable natural resources, accounting for 60% of exports in 2013.

The linkages of extractive activities with the rest of national economies are now lower than ever. Thus, despite impressive economic growth rates, the nature of structural change in many African economies have made them more vulnerable to external shocks.

False start again?
Africa possesses about half the uncultivated arable land in the world. Sixty percent of SSA’s population work in jobs related to agriculture. However, agricultural productivity has mostly remained stagnant since 1980.

Powerful outside interests, including the BWIs and donors, have been advocating large farm production, claiming it to be the only way to boost productivity. Several governments have already leased out land to international agribusiness, often displacing settled local communities.

One cannot help but doubt how the G20’s new ‘compact with Africa’, showcased at Hamburg, can combat poverty and climate change effects, in addition to deterring the exodus out of Africa, without fundamental policy changes.