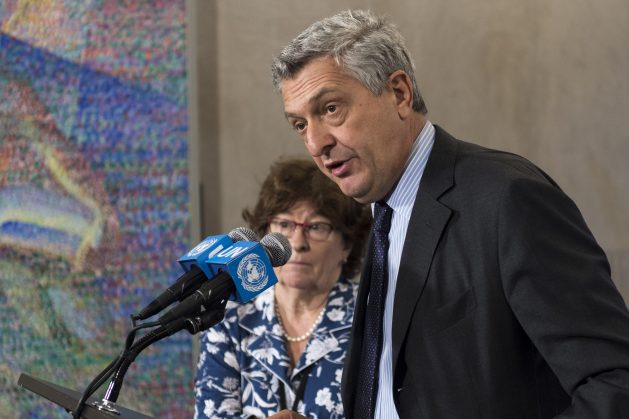 UNITED NATIONS, Sep 21 2017 (IPS) - One year ago, the international community agreed to work together to protect and save refugees and migrants. However, many are concerned over the lack of progress to make this noble goal a reality.

Adopted in September 2016, the historic New York Declaration reaffirms the rights of migrants and refugees and lays out a foundation of bold commitments agreed upon by all 193 member states.

The conflict in South Sudan has fueled the biggest exodus of refugees in Africa since the 1994 Rwandan genocide and has contributed to the creation of the world’s largest refugee camp.

During an event to mark the occasion, UN High Commissioner for Refugees Filippo Grandi reminded governments of their commitments as the world faces record numbers of displaced persons and a rise in complex migration.

“The scope and severity of global refugee crises which led to the adoption of the Declaration a year ago have not abated one bit,” he told delegates.

“We have a collective and moral responsibility to strengthen our response to refugee movements, while redoubling efforts to address their causes,” Grandi continued.

He particularly pointed to the exodus of refugees from Myanmar’s Rakhine state which has surpassed 400,000 in just three weeks as Rohingya Muslims flee persecution and deadly violence.

“[It] is a chilling reminder of the catastrophic human consequences that ensue when the conflicts and human rights violations that compel refugees to flee their homes go unchecked,” Grandi said.

Among the pledges in the Declaration are increases in humanitarian financing, resettlement slots, and responsibility sharing.

It also calls upon the creation of two global compacts—one on refugees and the other on safe, orderly, and regular migration—to be adopted in 2018.

With negotiations for the draft compacts currently underway, Grandi and Special Representative of the Secretary-General for International Migration Louise Arbour urged the international community to ensure the new global compacts are robust.

“Our ability to better manage human mobility rests on both compacts being as strong as possible: widely supported by member states and with the needs of the most vulnerable firmly at their heart,” said Arbour.

She noted that the compacts must be grounded in reality, including the recognition of the benefits of migration, and warned against false rhetoric.

“Discourse which is detached from this reality, grounded in stereotypes and predicated on fear, a discourse which demonises migrants or disparages their contributions not only risks fuelling intolerance but it also obscures the very real challenges we face today.”

Though some countries have stepped up to the challenge, Oxfam America’s new president Abby Maxman told IPS that progress towards the protection of refugees has been insufficient, particularly by wealthy nations.

“No one can resolve this situation on their own. It requires a real sense of interdependence, collaboration and commitment,” she said.

According to Oxfam’s analysis, six of the wealthiest countries host less than 9 percent of the world’s refugees.
Though Germany has welcomed far more refugees than the other richest nations, a major gap remains as low and middle-income countries continue to provide for the vast majority of refugees.

Assistance to such countries has also been lacking, leaving refugee-hosting nations alone to shoulder the costs.

As conflict rages in South Sudan after a peace agreement fell apart in July 2016, over one million refugees have flocked to the neighboring nation of Uganda.

It is the biggest exodus of refugees in Africa since the 1994 Rwandan genocide and has contributed to the creation of the world’s largest refugee camp.

Strained for resources, Uganda requested two billion dollars for the immediate crisis and long-term development solutions. However, world leaders have thus far contributed less than a quarter of the appeal.

“Seeing the state of the crisis, clearly there needs to be a systemic approach to ending the conflict but also commitment to providing support,” said Maxman, who just returned from a trip to South Sudan.

She also pointed to the United States, which has seemingly abandoned its commitments to refugee protection.

One of President Trump’s first actions upon taking office was to issue an executive order that severely restricted immigration from several Muslims countries, suspended all refugee admission for 120 days, and barred all Syrian refugees indefinitely.

Since then, the Trump administration reduced its refugee admission cap from 110,000, set by the previous administration, to 50,000. The figure is the lowest since 1986 when former President Reagan set a cap of 67,000, and the administration is threatening to reduce the cap even further.

As the North American nation was one of the largest donors to refugee assistance, Maxman expressed concern that the U.S. stepping back will impact the realization of the Declaration’s commitments.

“If responsibility sharing and access to durable solutions continue to remain ad hoc or severely delayed, we will see dramatic psycho-social-economic-educational implications of people living in limbo and that has long-term consequences,” she told IPS.

Maxman expressed hope that the ongoing UN General Assembly will cast a spotlight on the urgency to look for solutions and increase participation by wealthy nations.

Grandi echoed similar sentiments, urging government not to underestimate the task ahead to make the New York Declaration concrete.

“The seeds for change have been planted, but the shoots beginning to emerge need nourishment…We have a collective responsibility to strengthen our response to refugee movements with a new sense of urgency, and redouble our efforts to address their causes,” he stated.