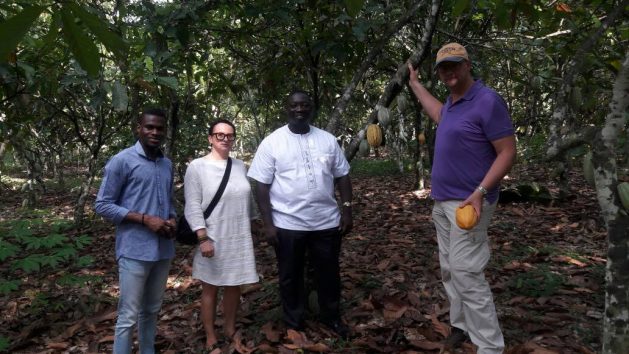 Professor of Food Science and Technology at the University of Ghana, Emmanuel Afoakwa, and other researchers at a cocoa farm. Credit: Kwaku Botwe/IPS

ACCRA, Oct 5 2017 (IPS) - Ghana is home to the world’s favourite cocoa beans. They’re bigger in size, have a higher butter content and superior flavour – all qualities which make Ghana’s cocoa the world standard against which all cocoa is measured.

“They [farmers who sell their lands] don’t know what they are doing because cocoa is a legacy that can be left to children, unlike one-time cash.” --Nana Kwasi Ofori of the Cocoa Farmers Association

Farmers in Ghana follow a strict routine in the planting, harvesting and drying of cocoa, supported and monitored by the government regulator, the Ghana Cocoa Board.

They employ natural drying of the beans in the sun (instead of heating), turning the beans at regular intervals for not less than a week. This natural and painstaking means of drying ensures the beans turn out their characteristic golden brown. The layers of monitoring at the time of purchase are all part of government’s intervention.

The country is the second biggest supplier of cocoa worldwide, beaten only by its West African neighbour, Cote D’Ivoire. But Ghana was once the world champion. It lost the first spot to its neighbour in the 1970s after government reduced the price given to farmers, thereby discouraging many from going into the venture.

Several factors have contributed to the shortfall. Distribution of free or subsidized farm inputs such as fertilizers or chemicals have been fraught with several challenges.

“Not all of us were given the free fertilizers. And they were politicizing it. Someone with a small farm of four acres could be given 50 bags of fertilizer while others with very big farms were given less,” Abusuapanyin Kwabena Amankwaa, a cocoa farmer, told IPS.

Central Regional Chief Cocoa Farmer Nana Kwasi Ofori also said that “farmers who are not cultivating cocoa were given some of the inputs”.

CEO of the Cocoa Board Joseph Baidoo has said his interactions with farmers revealed that Ghana’s fertilizers – which are not supposed to be for sale – were in fact being sold in Nigeria, Gabon and other neighbouring African countries, adding that this meant the free fertilizers were given to political party loyalists who were not cocoa farmers.

Diseases such as black pod, swollen shoot, and capsids have had a field day as a result.

The new government decided to discontinue the free fertilizer programme following what it says were complaints from farmers. Instead, it wants to sell the fertilizer at subsidized prices.

Ghana has an annual cocoa production target of one million tonnes. That target was achieved in 2011. Since then government has struggled to maintain the target, with annual production hovering around 800,000 tonnes.

In previous years, government decided to absorb the cost and technical assistance needed to apply the right chemicals and fertilizers to cocoa farms nationwide – initiatives called the Mass Spraying Exercise and the Hi-tech Programme, respectively.

Government also created the Rehabilitation Programme where old, less productive trees were felled and replaced with new, more-yielding hybrid seedlings for free. This saw a big dividend in cocoa bean output, with the country recording its highest cocoa output of over 1 million tonnes in 2011. But government has not been able to sustain the programme.

Probably the biggest threat to hit the cocoa industry in recent times is illegal mining, locally called galamsey. The upsurge in the search for gold between 2012 and 2016 has threatened the livelihoods of several cocoa farmers as galamsey takes over cocoa farms.

“Some chiefs are part of the problem which we are facing. They sell the land to the miners and collect the money so sometimes farmers are not even compensated,” said Nana Kwasi Ofori, an executive member of the Cocoa Farmers Association.

Most farmers are tenant farmers who work on lands owned by chiefs or families. Fifty-three-year-old Adwoa Oforiwaa, a cocoa farmer in the Central Region, says she was only given 500 cedis (about 112 dollars) as compensation when galamsey operators took over a good part of her farm.

“When they [galamsey operators] come, they tell you they have orders from the chiefs or even government, and they start the destruction,” she added.

A journalist in the Western Region – the leading cocoa-producing region in Ghana – Yaw Obrempong says some farmers willingly sell off their cocoa farms for ready cash.

“If the galamsey operator is here with a bag full of cash, why won’t I sell my land instead of staying in a queue for over two weeks only to be given a bag of fertilizer?” Obrempong noted.

He says some farmers claim they had to pay bribes in order to get farm inputs from the government. Other farmers sold their lands when the much-needed labour to work on the cocoa farms shifted into illegal mining.

But Nana Kwasi Ofori says, “They [farmers who sell their lands] don’t know what they are doing because cocoa is a legacy that can be left to children, unlike one-time cash.”

The galamsey invasion has affected a good part of the 1.7 million hectares of cocoa farms in the country.  The Government has launched an anti-galamsey crusade to flush out illegal miners. With the help of a taskforce including the military, several arrests and confiscation of galamsey equipment have been carried out.

The launch of the Media Coalition against Galamsey has also given government a shot in the arm. Government has moved the crusade a notch higher with the announcement by the Ministry of Lands and Natural Resources of its intention to procure drones at the cost of 3 million dollars for surveillance.

Nonetheless, cocoa remains the most important economic crop for Ghana, raking in about 2 billion dollars annually, contributing to some 4.22 percent of the country’s GDP.  Such a feat has been achieved through government interventions such as price stability. For instance, the world price of cocoa beans has plummeted from about 3,122 dollars per tonne last year to about 1,900 dollars this year, yet the Cocoa Board maintained s producer price of 7,600 cedis per tonne (1,700 dollars).

The Board is able to cushion farmers with a Stabilization Fund established some ten years ago, as well as other sources of funds. This presents a big advantage for cocoa farmers in Ghana over other cocoa-producing countries on the continent this year.

For instance, the Ivorian government has slashed the prices of cocoa almost by a third, to 700 CFA per kg (about 1,300 dollars per tonne). Some Ghanaians have expressed concern that the development is likely to reverse the dreaded cross-border smuggling of cocoa (Ghana has in the past seen a lot of its cocoa smuggled to their neighbor countries because of price differences).

But professor of Food Science and Technology at the University of Ghana, Emmanuel Afoakwa says “it is not likely because Ghana is bent on protecting its premium quality and so there is tight security to ensure cocoa does not move from Cote D’Ivoire and other countries into the country”.

He adds that “farmers must cherish that government is interested in their welfare because government now loses about 500 dollars on every tonne of cocoa bought from them”.

The Ghana Cocoa Board also has an arrangement to pay for the felling and replanting of old and diseased cocoa trees. The board has announced that it will be giving away about 60 million seedlings to farmers for replanting. The exercise, called rehabilitation, is meant to boost output.

The Government also has a programme to woo youth into the sector to replace aging cocoa farmers. The Board is providing support for all young cocoa farmers by giving them hybrid pods, improved seedlings, free fertilizer and inputs, a farmer business school programme, as well as extension support to boost cocoa production. Cocoa farmers are also pushing for a Cocoa Farmers Pension Scheme which they believe will help attract the youth.

Currently, the seven processing companies operating at various levels of value-addition process about 25 percent of the county’s exported cocoa. But most of the processed cocoa are exported in semi-processed form of cocoa paste.

Prof. Afoakwa says the huge capital requirement involved in processing cocoa into finished products fit for export could be a big hurdle for Ghana. Moreover, there are high tariff walls with regards to the export of processed products. For example, the European Union levies no duties on the import of raw cocoa beans, but levies a 7.7 percent and 15 percent duty on cocoa powder and cocoa cake, respectively.

He believes heightening the campaign on the consumption of cocoa products would be one way of tackling the issue.

“I’m working with Ghana Cocoa Board to conduct the cocoa product processing competition and we are bringing together ten different polytechnic institutions to develop new products using cocoa. We are going to invite high schools to come witness it. What we are trying to do is to advocate for higher consumption of cocoa products and this can be done when we know the kind of different products that we can make out of cocoa,” he added.