*Rukka Sombolinggi is the new Secretary General of Aliansi Masyarakat Adat Nusantara (AMAN), known as the Indigenous Peoples' Alliance of the Archipelago 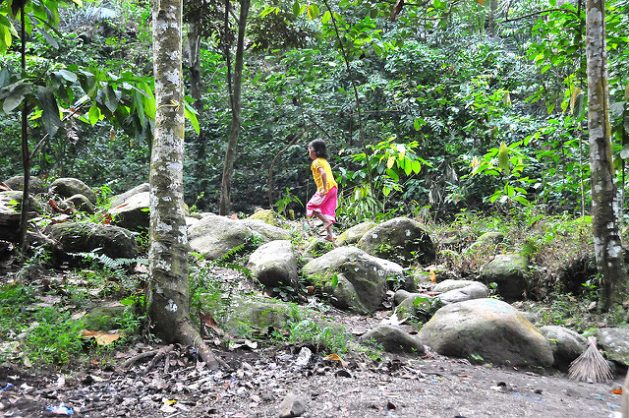 JAKARTA, Indonesia, Oct 13 2017 (IPS) - When nine women farmers from the Kendeng community in Central Java encased their feet in cement blocks last year, many indigenous advocates understood how that felt. Dressed in their traditional clothing, these women protested outside the State Palace in Jakarta to block a proposed cement plant that would pollute the rivers flowing through their villages. Their livelihoods as farmers were under threat, as was their cultural heritage.

These women who so inspire me, like most Indigenous Peoples in Indonesia, have lived on their land for generations without official recognition of their rights. Their communities began long before current laws were written—in fact, long before Indonesia was a country.

At first, their protest—hundreds of miles away from their homes—was successful. It brought attention to their plight and led the Supreme Court to rule in 2016 that factory construction must stop. But in response, the local government issued new environmental permits and the construction started again.

This prompted the women to renew their resistance—this time joined by men. More than 100 farmers have been protesting, and the added attention continues to press the local government and its private sector partner to comply with the court ruling.

This is how progress moves in Indonesia: for every two steps forward, we take one step back. In 2013, after decades of indigenous advocacy, the Indonesian Constitutional Court ruled that the government has no right to indigenous forests and must return them to their customary owners.

Many of those on the frontlines defending indigenous lands and resources are women. Before the Dutch colonized Indonesia, women had a prominent role in community governance and often served as judges and chiefs.

But European influences forced women into subservient roles. It wasn’t until my mother’s generation that indigenous women started to reassume their traditional leadership.

Aleta Baun, a farmer from the Mollo people in the western part of Timor, showed us all how this is done. When a mining company started digging into Mutis Mountain, fouling the headwaters of the rivers that run through the Mollo’s territory and desecrating one of their sacred places, Mama Aleta, as she is affectionately known, led the resistance.

She organized the remote villages of her people, dodging assassination attempts along the way, and led a year-long occupation of the mining site by women weavers that eventually stopped the operation.

And we must not forget Nai Sinta Sibarani, who led her community, the Batak in North Sumatra, in resisting Inti Indorayon—a mega-sized pulp and paper company—under the oppressive General Suharto regime in the early 1990s.

Yet Indonesia’s laws afford women like Mama Aleta and Nai Sinta Sibarani even less protection for their lands than men. A recent analysis of 30 developing countries from Rights and Resources Initiative found that Indonesia is one of only two countries that does not include equal protection for women in its constitution.

In addition, not one of the country’s six legal frameworks regulating community forests adequately protects women’s rights to inheritance, community membership, governance, or dispute resolution, which are key for women to assert their voice, achieve economic security, and play a leadership role in their communities.

Because women are so often responsible for managing their customary forests and feeding their communities, this lack of protection for women leaves entire communities vulnerable. Huge swathes of indigenous lands have already been leased or sold to oil palm plantations and other developments, resulting in deforestation and forest fires. Indonesia now has one of the most unequal land distribution in the world.

A recent study on conflicts between communities and companies in Indonesia and seven other Southeast Asian countries found that almost half were driven primarily by Indigenous Peoples being forced from their homes. This can be particularly hard on women, who so often depend on the lands for their livelihoods.

The Kendeng farmers and Mollo weavers rely on the land for traditional dyes as they handcraft their textiles, as do the Dayak basket weavers from Kalimantan and the Baduy in Western Java.

As I take the lead of the Indigenous Peoples’ Alliance of the Archipelago (known by its Bahasa acronym, AMAN), a coalition of more than 2,300 indigenous communities throughout Indonesia, I draw my strength from Mama Aleta, the women of Kendeng, and many others—including my own mother, whose tireless advocacy for women’s rights helped open the doors I have walked through.

Indigenous women will not sit idly by while their rights to their lands are violated—the lands that sustain them and are part of who they are as Indigenous Peoples. When our communities’ lands and livelihoods are threatened, we will continue to be on the front lines leading the resistance. It is time for our government to recognize this, and to recognize and protect our rights.

*Rukka Sombolinggi is the first woman to lead the Indigenous Peoples’ Alliance of the Archipelago (known by their acronym in Bahasa, AMAN).