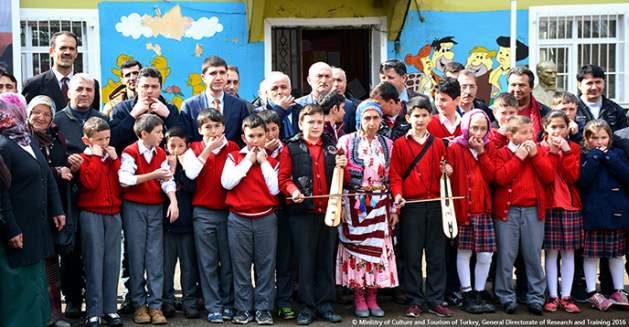 JEJU, Republic of Korea, Dec 6 2017 - The Intergovernmental Committee for the Safeguarding of the Intangible Cultural Heritage, meeting in Jeju until 9 December, today inscribed six new elements from Botswana, Colombia and Venezuela (Bolivarian Republic of), Mongolia, Morocco, Turkey and the United Arab Emirates on the List of Intangible Cultural Heritage in Need of Urgent Safeguarding.

The inscription of elements on the Urgent Safeguarding List helps States Parties to UNESCO’s Convention for the Safeguarding of the Intangible Cultural Heritage to mobilize international cooperation and assistance to ensure that communities continue to practise and transmit their intangible cultural heritage.

The titles of the newly inscribed elements below (in chronological order of inscription) lead to web pages with information, pictures and videos:

Dikopelo involves vocal singing and dancing in a patterned choreography without musical instruments. Dikopelo is in need of urgent safeguarding, primarily as a result of migration away from farmlands to villages, as well as modern entertainment practices, which threaten its viability. The community and the practitioners are nonetheless committed to safeguarding the element, as illustrated by efforts to compete with groups from other districts and to revive Dikopelo as a strategy to protect young people from social ills.

Llano work songs consist of tunes sung individually, a capella, on the themes of herding and milking. The songs are repositories of the individual and collective stories of the llaneros. The practice nonetheless faces numerous threats to its viability, such as the modification of the social, cultural and natural sites of the songs and alterations to the demographic composition of llanero society. Safeguarding efforts include a pedagogical strategy for bearers and young people, training for schoolteachers and festivals.

According to ancient shamanism, the Mongolian practices of worshipping sacred sites are based on the belief in invisible deities of the natural surroundings. The practice builds a sense of community and raises awareness about the interdependence of human beings and the environment. During the communist regime in Mongolia, the worship of sacred sites was banned, threatening its viability. Communities have been actively reviving the tradition, but several challenges remain, including globalization, urbanization and a drastic reduction in the number of practitioners and masters.

Taskiwin is a martial dance specific to the western High Atlas that gets its name from the horn each dancer carries. It involves shaking one’s shoulders to the rhythm of tambourines and flutes. The practice is threatened by several factors including globalization, young people’s increasing disdain for traditional heritage practices and a decline in the related craftsmanship. The last two decades have nonetheless seen an increased collective awareness among communities, and dedicated associations have been set up to safeguard the practice.

Whistled language is a method of communication that uses whistling to simulate and articulate words. The practice is connected to the rugged topography of the region, which required the local population to find ways to communicate across long distances. Technological developments and socioeconomic changes have led to a decline in the number of practitioners, and the new generation’s interest in the practice has diminished considerably. Communities concerned are nonetheless committed to actively promoting this linguistic practice both nationally and internationally.

Al Azi is a traditional poetry recital performed by a group of individuals without instruments. The practice strengthens bonds in the community and is connected with knowledge and practices related to nature. Due to migration, the enactment of state laws instead of traditional tribal customs and a loss of spontaneity in the art, performance of the practice has diminished considerably. Al Azi has nonetheless withstood extinction thanks to successful safeguarding efforts by the communities concerned, and has recently enjoyed a revival.

The Committee is meeting at the International Convention Centre (IC Jeju), Jeju Province, Republic of Korea