Stuart Rutherford, Consultative Group to Assist the Poor (CGAP), a global partnership of more than 30 leading organizations that seek to advance financial inclusion.

WASHINGTON DC, Jan 8 2018 (IPS) - Bangladeshis have a long tradition of borrowing from family, neighbors and other informal sources. Microfinance institutions (MFIs) have proliferated over the past three decades and offer a more formal loan service that has been taken up with enthusiasm, and today some 25 million Bangladeshis borrow from MFIs. 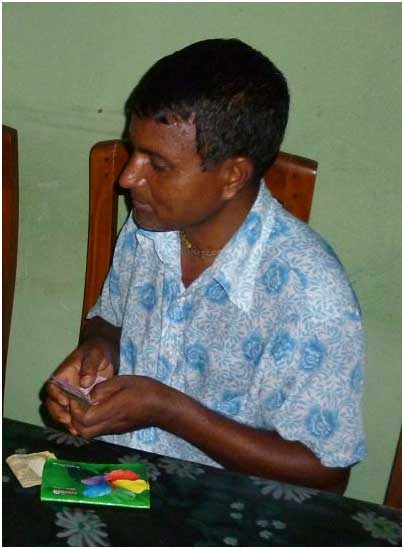 But how are these MFI loans used? Do people take them for the same reasons they borrow from informal sources, or do they use MFI loans differently?

To help answer questions like these, the Hrishipara daily diaries project tracks all the daily money transactions of a group of poor respondents in central Bangladesh. For 40 of our diarists, we have data for more than two years.

We recorded them borrowing between them 954 times from both MFIs and informal sources, for a total value of 6.7 million Bangladesh taka (about PPP$210,000). Then we watched what happened next. Here are two key observations from the exercise.

MFI loans are rarely less than $300 in value, whereas informal loans range from a few dollars up to several thousand. To make sure we compared like with like, we took 50 loans of each kind with a value of at least $300 and for which we have records of the borrower’s subsequent transactions.

Perhaps the most striking difference between MFI and informal loans is how soon they are used. Informal loans are spent quickly: Our data show a major expenditure of at least 80 percent of the value of the loan on the same day that an informal loan was taken in almost half the cases, and within one week in all but 18 percent of cases. Two-thirds of MFI loans, by contrast, show no clear corresponding expenditure in the week following receipt of the loan.

When were loan proceeds spent? (%) 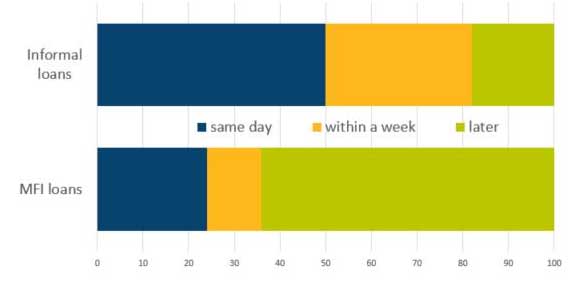 Informal loans are used for a single purpose, while MFI loan use is more nuanced

To understand why informal loans are used faster, it helps to look at the uses to which the loans are put. Informal loans are most often used for a single purpose, like paying for a ceremony, setting up a business, buying land, dealing with an emergency or paying for work migration. Some MFI loans are taken for these purposes, of course, but they also have other uses. Here are some of them:
• On-lending to others. Seven of the 50 MFI loans, but only one informal loan, were on-lent to others. MFIs usually disburse loans on an annual cycle, so borrowers may get a loan at a time when they have no immediate use for it, leading them to on-lend. It may take time to find a good borrower. The pressure MFI fieldworkers put on clients to accept loans may also lead borrowers to lend them out to others, for lack of other profitable uses for them. This was observed in two of the seven cases.

• Repaying debt. Twelve of the MFI loans were used to repay other private or MFI debt, but only six informal loans were used that way (and then only in part). This is often because of the annual loan disbursement rhythm of MFIs. Clients borrow privately for some urgent need at the time it arises, and then, when they are next eligible for an MFI loan, they take it to “refinance” the private loan. MFI loans are cheaper than some private on-interest loans, and some borrowers find it easier to repay MFI loans week-by-week than to find a large lump sum to repay a private loan in full.

• Held in reserve. We were surprised to find how often MFI loans are held at home (or in a shop) as a liquidity reserve, rather than spent. At least 18 of the 50 MFI loans were used in this way, as opposed to two informal loans. For example, Ram Babu is an extreme-poor rickshaw driver with three daughters, a wife and a sick mother to support. He kept taking MFI loans to ensure he would have cash on hand should his mother’s health take a turn for the worse. After his mother died, he stopped taking MFI loans. The MFI repayment schedule — small weekly amounts over many months — makes this behavior possible and may well encourage it. It imitates the “little and often” set-asides of regular savings accounts or of informal deposit-takers like the susu collectors of West Africa.

The MFI loan – a substitute for savings?

Informal loans are usually taken for a single purpose and used quickly. Some MFI loans are used in the same way, but MFI loans serve other purposes, like refinancing private debt and ensuring that cash reserves are always available. As such, they offer an expensive but attractive substitute for a savings regime.

Our findings show how Bangladeshis have learned to use MFI and informal loans in tandem, exploiting the best features of each. Far from consigning informal borrowing to the history books, formal innovations like MFI lending tend to strengthen informal practices.