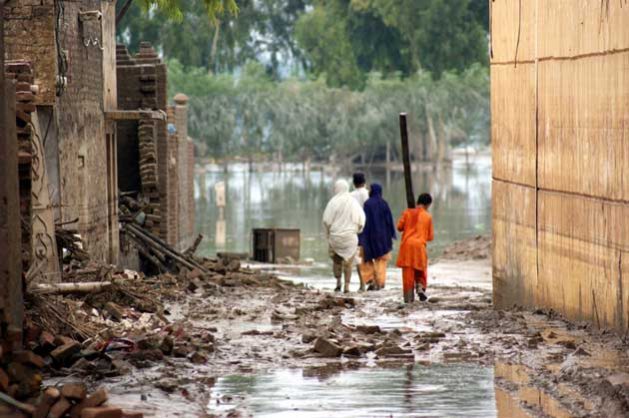 KARACHI, Pakistan, Feb 2 2018 (IPS) - Historically a small fishing village, Karachi has now turned into Pakistan’s biggest commerce and industrial center that generates about half of the country’s tax revenue.

The city also accounts for at least 42 per cent of its total gross domestic product (GDP), houses its stock exchange, central bank, and the headquarters of most banks, along with major foreign multinational corporations.

The former capital has an ethnically and religiously diverse population that exceeds 17 million, and according to a 2015 report by Express Tribune, a million people from other cities and rural areas migrate there every three years due to its high employment opportunities.

In fact, urban cities – such as Karachi – are usually more susceptible to heat waves due to a phenomena knows as the “heat island effect” which causes temperatures to be 5-8 °C higher than the countryside.

“The vehicular and industrial emissions as well as the increased energy consumption of an unchecked growing population in poorly planned yet densely populated settlements also factor in.”

In 2015, the severe heat wave that struck Southern Pakistan had temperatures as high as 49 °C and in Karachi alone claimed the lives of almost 1,200 people, according to local newspapers – a first in the country’s recent history.
Karachi is also close to the Indus River Delta, where the Indus flows into the Arabian Sea.

Due to rising sea levels, the delta is now almost at-level with the Arabian Sea.

“This threatens the stability of the ecosystem because it leads to land erosion and increases the salinity of creeks flowing from the Indus,” says Dr Amir Inam of Pakistan’s Institute of Oceanography.

Sea intrusion increases temporary and permanent flooding to large land areas, which limits fresh water supplies and food security, he adds. This also creates an inhospitable environment for aquatic creatures and mangrove trees that depend on fresh water.

In fact, the area of Pakistan that is covered by mangrove forests has decreased from 400,000 hectares in 1945 to 70,000 hectares, according to a report by Climate Change News, due partly to the rising sea levels and partly to land grabbing. Some 205 acres had been razed to make way for several coal-fired power plants.

The repercussions of the upset in the balance of the ecosystem are vast. According to the World Wildlife Federation (WWF), these mangrove trees play a critical role in buffering the coastline from erosion caused by waves and storms.

“Mangrove trees cannot stop cyclones and tsunamis. But they do act as the first line of defense against these natural calamities, minimizing their damage,” adds Dr. Inam.

With the mangroves gone, the Karachi coastline has become more prone to natural disasters such as cyclones and tsunamis.

While no major tsunami has struck Karachi since 1945, a drill stimulating a major earthquake in the Indian Ocean conducted by United Nations warned that the tsunami waves could reach Karachi in just one and a half hours and “wipe out the entire city”.

So far, no tangible evacuation plan exists to prepare the city’s residents in case of an emergency.

An additional strain to Karachi’s stability is the Port Qasim Power Project, part of the China-Pakistan Economic Corridor program, currently in development along the coastline of the Arabian Sea.

Though created to alleviate Pakistan’s energy crisis, the project has wreaked havoc on the lives of people in close proximity to it, and damaged one of Pakistan’s most critical ecosystems that many living along the coastal belt replied on, to farm and fish.

These changes have already displaced as many as 80 percent of the five million Pakistanis who once lived along the banks of the Delta.

Policy making on climate change have so far lagged in the country and the first major bill to “fast-track measures needed to implement actions on the ground” was passed just last year.

Measures had been passed earlier address climate change, but most have been little implemented, critics charge.

“The Pakistani government must prioritize its response to climate change in order to mitigate environmental threats and prevent future calamities,” says Sarfaraz Khan, an environmental activist based in Pakistan.

And much like the government, the Pakistani public finds it difficult to prioritize climate change when the average citizen is deprived of life’s most basic necessities and the immediate and clear hazards to livelihood trump long-term, still somewhat largely invisible threats.

However, this perception is changing as global warming starts to impact everyday life.

In 2007-2008, a Gallup poll found that only 34 percent of Pakistanis were aware of climate change, and only 24 percent considered it a serious threat but by 2015, Pakistan had joined a list by Pew Research Center of the top 19 countries where the majority of the population now considers climate change a top global threat.

“For decades, Pakistan has struggled to manage urgent crises, ranging from infrastructure woes to terrorism,” adds Khan. “There is no downplaying the severity of those threats but, at the same time, it is vital to acknowledge that another potentially devastating danger lurks in the shadows.”

Karachi was named among the least safe cities of the world in a 2017 report of 60 cities published by the Economist Intelligence Unit (EIU).

Only five cities across the globe were placed above Karachi in the category of deaths from natural disasters.
Annually, more than four people among one million lost their life in Karachi due to natural disasters.

If actions are not taken to combat the impact of climate change, environmental factors will continue to worsen the political and economic instability in Pakistan and one of their biggest threats, in the long term, is the stabilization of Karachi, the country’s economic backbone.