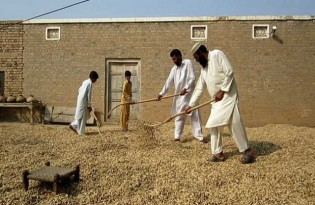 By Rabiya Jaffery
Anas Shaikh is a Pakistani farmer on a mission to bring solutions to the many difficulties small and medium-scale farmer’s face in making a sustainable living.

By Rabiya Jaffery
Jordan is one of the driest countries in the world, raking the fifth most water-stressed nation in an analysis by the World Resources Institute.

By Rabiya Jaffery
Nearly 50 million people in west Africa rely on agriculture and livestock for their livelihood but the land available for pastoral use has been rapidly shrinking.

By Rabiya Jaffery
According to data from the UN Development Programme (UNDP), the Arab world is one of the most urbanised areas in the world, with more than 70 per cent of the population of the six-member Gulf Cooperation Council (GCC)--- Bahrain, Kuwait, Oman, Qatar, Saudi Arabia, and the United Arab Emirates (UAE)-- living in urban areas.

By Rabiya Jaffery
Biodiversity conservationists have revealed that at least 10 more percent of land than what is currently being used to grow green crops will be required to successfully replace fossil fuels with alternatives derived from natural sources such as biofuel.

By Rabiya Jaffery
Leaders of Amazon’s indigenous groups are calling for a new global agreement to protect and restore at least half of the world’s natural habitats.

By Rabiya Jaffery
A discussion held earlier this week at the ongoing Convention of Biodiversity’s (CBD) Conference of Parties in Egypt highlighted that grants to curb deforestation in the Amazon are not enough if they are accompanied with investments that increase the loss of biodiversity.

By Rabiya Jaffery
The Middle East, due to its geographical location, is particularly prone to the impacts of climate change. Longer droughts, more frequent and intense heatwaves, and higher temperatures in the summer are expected to to become increasingly prevalent throughout the Middle East - from Sana’a to Jeddah to Dubai to Tehran.

By Rabiya Jaffery
Marjani F, 44, spent 8 years in Riyadh, Saudi Arabia’s capital working as domestic help. “My husband was killed by the military after being accused of organizing a protest. I have four children and there was no way I could pay the bills staying there,” she says.

By Rabiya Jaffery
As shifting weather patterns and extreme climates become the norm, access to climate funds are deemed essential for developing countries, such as Pakistan, that are facing the brunt of climate change.

By Rabiya Jaffery
With more and more people living outside their country of origin, it is becoming increasingly clear that stronger legal parameters -- within and between nations --- are required to protect the most vulnerable of migrants from denial of access to fundamental rights.

By Rabiya Jaffery
Historically a small fishing village, Karachi has now turned into Pakistan’s biggest commerce and industrial center that generates about half of the country’s tax revenue.

By Rabiya Jaffery
The world’s nations got together in Bonn, Germany, for the 23rd annual Conference of the Parties (COP) under the UN Framework Convention on Climate Change (UNFCCC), where nearly 200 countries and some 23, 000 delegates met to discuss and influence the negotiations over the rulebook of the Paris Agreement.

By Rabiya Jaffery
Since weather affects everyone, the idea that women are more susceptible to the effects of climate change may strike some as puzzling.

By Rabiya Jaffery
Rising temperatures due to global warming may ground up to a third of airplanes worldwide in the decades to come, according to a recently published analysis by Columbia University.

UAE Leading the Way on Shifting to Greener Energy

By Rabiya Jaffery
Much of the world is moving away from oil for its electricity generation, according to the International Energy Agency (IEA), which says that globally the fossil fuel has dropped from a 25 percent share to 3.6 percent over the last four decades.
ADVERTISEMENT ADVERTISEMENT