AMMAN, Jordan, Mar 22 2018 (IPS) - With more and more people living outside their country of origin, it is becoming increasingly clear that stronger legal parameters — within and between nations — are required to protect the most vulnerable of migrants from denial of access to fundamental rights. 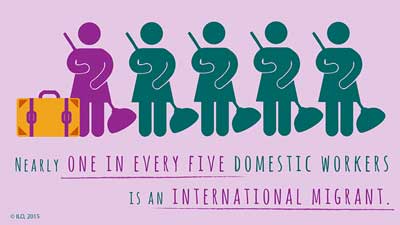 The UN’s proposed Global Compact on Migration, currently under negotiation by UN member states, covers a wide range of issues on labour and human rights, and is a significant opportunity to improve the governance on migration and to address the challenges associated with today’s migration,
“It is important to remember to address the specific issues faced by domestic migrant workers in the Middle East,” Somayya Mohammed, an immigration lawyer based in the Middle East, told IPS.

“Domestic migrant workers comprise a significant part of the regional workforce in informal employment and are among the most vulnerable groups of workers.”

The Middle East’s Gulf region has an estimated 2.4 million migrant domestic workers, traditionally recruited from Asia – mostly from the Philippines, Indonesia and India.

All foreign workers in the Gulf fall under the kafala (a visa-sponsorship) system which does not allow them to leave or change employers without their initial employer’s consent. If they do, they can be arrested and punished for “absconding” with fines, detention, and deportation.

Most Gulf countries have begun pushing some sort of reforms when it comes to labor laws for migrant workers in recent year.

Last year, the Federal National Council of the United Arab Emirates (UAE) adopted a bill on domestic workers that for the first time guarantees a weekly day of rest, 30 days of paid annual leave, paid and unpaid sick leave, and 12-hours of rest a day, among other rights.

“While a significant advance, these draft laws still fall short of the International Labour Organization’s (ILO) Domestic Workers Convention, as they provide fewer protections than those accorded other workers under national labour laws,” according to a statement by Human Rights Watch.

Oman’s domestic worker regulations, for example, are weak, with no penalties for employer breaches, and it is the last country in the Gulf region not to provide labor rights in law, the statement adds.

“While some of the Gulf countries have been making reforms in their labor laws, the very essence of this system [of kafala] is very harsh and exploitative because the sponsor basically has absolute power over their employees,” says Mohammed.

“Domestic workers, particularly, are often forced to work in isolation and harsh conditions and are vulnerable to sexual and other forms of abuse.”

Just earlier this month, the Philippines barred nationals from seeking domestic positions in Kuwait after a Filipina maid was found dead in a freezer in her employer’s home, which officials in Manila state was merely one of many similarly unacceptable incidents in the Gulf state.

A new agreement is currently being worked on between Kuwait and Filipino authorities which seems to reassure greater protection and a stronger regulatory framework for migrant workers. But, according to media reports, there is a possibility the Philippines may only lift the ban on skilled workers.

This isn’t the first time a country has taken preemptive measures to protect low-skilled nationals working or seeking work in the Gulf.

Many Asian countries now also verify contracts to check employers agree to a minimum salary and working conditions before allowing domestic workers to go abroad. India and Sri Lanka also require sponsors to provide security deposits that are returned once the worker has safely returned home.

But several reports, including one by Human Rights Watch, show that ever since Asian countries began tightening regulations to protect domestic workers, recruiters have been expanding their demand for cheap domestic labor into East Africa— especially in nations where poverty and high unemployment make the offer of work in the Middle East hard to refuse.

When Fatima left Tanzania to work as a nanny and maid in Oman in 2014, she thought she had landed a dream job that would allow her to support her family back home. Instead, she spent two years virtually imprisoned in her employer’s house, being exploited and mistreated.

She was expected to do all household chores, take care of four children, including a newborn baby, be up any time of the night to tend to the baby, and then start her day at 4 a.m. to prepare the family’s breakfast and get the children ready for school.

She was allowed two meals of leftovers a day. Communication with her family was restricted to 10 minutes every two months.

Patricia Lawson, a researcher from the Tanzanian Domestic Workers Coalition, and NGO that works on protecting domestic worker rights, recently surveyed 50 Tanzanian domestic workers based in either Oman or Kuwait.

She was told by 43 of them that their employers confiscated their passports, forced them to work seven days a week, and almost half said their employers had, at one point or another, forcibly confined them to their homes or residential compounds.

“Most women said their employers made escape even more difficult by limiting their communication for weeks and prevented them from seeking help from the outside world,” Lawson told IPS. “And at least half had absolutely no privacy and were forced to sleep on the floors of living rooms.”

The women, who described sexual harassment and assault, said that male family members groped them, exposed themselves, and entered their rooms late at night. And several described attempted rape.

“The men get violent or threaten to throw us out when we refuse their advances,” says Aisha, another former Tanzanian domestic worker who worked in the UAE for a year and then in Oman for two years. “Or they would lie to their wives and say that I tried to seduce them.”

According to Lawson, women also mentioned they could not communicate with their female employers due to language barriers or fear of dismissal.

“If they did complain, female employers would not believe them, place the burden on them to avoid the harassment, or simply fire them,” says Lawson.

Many women said when they asked to leave, their employers or agents demanded repayment of recruitment costs – often far more than they had earned.

A Human Rights Watch report from 2017 mentions a Tanzanian domestic worker who went to file a complaint with the Oman police in 2016 after a male member of the family she was working for sexually assaulted her.

The police told her that her employer had pressed charges against her for running away. She was asked to pay a fine or spend three months in jail. Oman does not criminalize non-penetrative sexual assault or harassment, as in her case.

A former official at the Tanzanian embassy in Oman told IPS that none of the rape cases reported to the police by domestic workers they assisted had moved forward, either because the women refused to undergo forensic tests or the police, after questioning the women, did not believe they had been raped.

In the Gulf region, when authorities do not believe the claim, reporting a rape can be considered a confession of consensual sexual relations, prompting charges of zina (sexual relations outside of marriage) against the rape victim.

Compounding the lack of justice, due to the stigma, migrant domestic workers rarely reported sexual violence and suffered in silence.

Lawson says her NGO teaches women the telltale signs of exploitation and tracks women overseas, calling embassies if they are in trouble. Given the lack of safety mechanisms or the political will for change, she says it is better “not to tell women not to go, but to teach them to travel safely.”

According to a Human Rights Watch Report from 2016, Tanzania has expanded some protections for overseas migrant domestic workers since 2011, but there are still many gaps in Tanzania’s recruitment and migration policies which place workers at heightened risk from the outset and provide little opportunity for redress.

Tanzania requires workers to process their applications to migrate through the country’s labor ministries, but many workers migrate outside of this channel.

The authorities require women to migrate through a recruitment agency but have not set out minimum standards for how agencies assist workers in cases of abuse, or for inspections and penalties in case of violations.

“I’m pushing for investigations. I haven’t come across one case that was investigated,” Mickness Mahera, a Tanzanian politician who has been helping to rescue women trapped in the Middle East, told IPS.

Mahera is calling on the government to enter into labour agreements with Gulf nations to protect its domestic workers abroad.