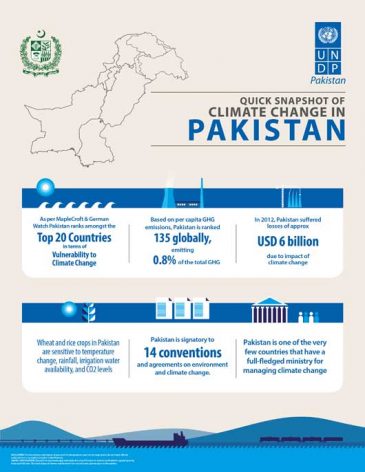 KARACHI, Pakistan, Mar 26 2018 (IPS) - As shifting weather patterns and extreme climates become the norm, access to climate funds are deemed essential for developing countries, such as Pakistan, that are facing the brunt of climate change.

Based on the ADB Climate Change profile of Pakistan, a number of mitigation and adaptation measures have been taken by the government using domestic resources.

But Pakistan is still awaiting international funding required to intensify its efforts using capacity building and technology for its National Adaptation Plan, says Fatima Fasih, Program Manager for Sustainable Development at the Centre of Excellence in Responsible Business (CERB).

According to UNFCCC, climate finance is critical in addressing climate change because large-scale investments are required to adapt to changing climates, reducing emissions, and shifting to a more sustainable future.

Pakistan’s Nationally Determined Contribution (NDCs) submitted to the 2015 Paris Agreement, aims to reduce up to 20% of its 2030 projected GHG emissions — using international grants for adaptation and mitigation of approximately $40 billion.

The Paris Agreement commits countries to pledge not to just keep global warming “well below two degrees Celsius”, but also to “pursue efforts” to limit warming to 1.5 degrees C by 2018.

Several researches including one carried out by Daniel Mitchell and others at Oxford University states that while the difference between 1.5 degrees and 2 degrees will be marginal in annual average temperature, it would have a significant impact on reducing the probability of destructive weather events like floods, droughts, and heat waves.

“It is very important for temperatures to remain below 1.5 degrees because natural extreme weather events are going to become the norm – especially in Pakistan and other mid-latitude countries,” says Sidra Adil, an environmental engineer and GIS analyst .

Over the past 50 years, the annual mean temperature in Pakistan has already increased by roughly 0.5 degrees.

The government expects to get international grants worth $7 billion to $14 billion every year to be able to adapt to climate change and the senate passed a policy in 2017 that called upon the creation of Pakistan Climate Change Authority to manage the proposed fund.

But not only has little has come out of it, so far, and there is no concrete indication that the Global Climate Fund will be providing the required financial resources.

“There is little or no knowledge of any such funding from the GCF (Global Climate Fund) to help in the mitigation and adaptation against climate change,” says Fasih.

According to some statistics, between 1997 and 2016, Pakistan suffered from 141 extreme weather events and lost an average of 523.1 lives per year due to climate change effects.

And as average global temperatures rise, impacts across the country will vary widely from glacial melting in the North to increase in sea levels at coastal areas.

Many of these will be unpredictable and possibly volatile — “such as increase in number of extreme events, such as droughts and hurricanes,” explains Fasih.

But some of the repercussions can be predicted.

“The impacts of rising temperatures are huge as increase in glacial melt will increase in flooding around the flood banks of River Indus over the next few decades,” says Fasih.

Based on ADB’s Climate Change profile of Pakistan, the sea level is expected to rise by an additional 60 centimetres by end of the century. The melting glaciers will also lead to more freshwater converting to seawater and worsen water scarcity.

“Even a rise of 1.5 isn’t desirable but that extra 0.5 degrees will make the situation a lot more dire,” says Adil. “We don’t have enough water storage options and are well on the way to becoming a water scarce nation.”

For a country where more than 50 per cent of the population is directly or otherwise dependent on agricultural activities, the impacts of this would be detrimental.

“The [difference of] 0.5 degrees increase in temperatures means a lot for people that depend largely on the weather cycles for their business and farms – which is majority of our business sector and rural areas,” Fasih says.

The loss of freshwater supply will also lead to production of hydropower at dams, such as Mangla & Tarbela.

“Considering how big the issue of energy is to us Pakistanis, this impact will surely hit across the country,” adds Fasih.

Adil states that while no rise in temperatures is ideal – that 0.5 degree difference is trivial.

“It won’t be as bad or as intense as 2C of course,” she says. “1.5 degrees gives us the room for a trade-off to work on climate strategies.”

According to a report by Yale University, should global emissions continue to rise beyond 2020, or even remain level, the temperature goals set in Paris become almost unattainable.

“It is very important to transition to renewable energies but our emissions aren’t that high – the main problem right now is that we are on the receiving end of high emissions from other countries,” says Adil.

The Federal Minister for Climate Change Zahid Hamid pointed out at the 2016 United Nations Climate Change Conference that– despite ranking amongst the top 10 countries most vulnerable to climate change– Pakistan emits less than 1% of total annual global greenhouse gases.

“Climate influences us as a whole – it is not a region concept. It is a global concept,” Adil adds.

This is an almost unanimous international agreement -that climate change is a global phenomenon and none of the countries alone can deal with the issue.

And the technology-driven transition to 100% renewable energy globally is well under way, a trend that made the 2015 Paris climate agreement possible -and there are already signs that this is paying off.

Just in the past three years, global emissions of carbon dioxide from the burning of fossil fuels have levelled after rising for decades as major polluters and other nations are starting to boost renewable energy sources.

And over half of that investment, $156 billion, was for projects in developing and emerging economies.

“This is a sign that policies and investments in climate mitigation are starting to pay off,” says Andrew Higham, CEO of Mission2020, in a report. “But there is still a long way to go to decarbonize the world economy.”

For Pakistan, this transition to renewable energy could take at least a decade, if not more but experts states that implementation of natural climate solutions on a smaller scale is as important a step today.

“We can’t even provide electricity to 60% of our population through coal – that we have an abundance of,” says Adil. “So it is impossible for us to transition to renewable energy right away. Policies have to change and this will take 10-15 years for the very least.”

But for that to take place, the government needs to allocate the right resources, hire trained individuals, lose short-sightedness for projects that bring quick profits at the expense of sustainability, and create awareness about the triviality of the issue.

“Despite having a Ministry of Climate Change, there is very little that it has done thus far, since most of its powers and budget has been slashed by the current elected government,” says Fasih.

But that is not speaking for the entire country- the private sector may be moving in a different direction.

Textile and agriculture based companies, for instance, that comply to standards abroad are now actively pursuing environmental stewardship, via waste reduction, ethical consumption, water conservation and reduction in emissions.

Many NGOs, such as Climate50, founded by Adil, are also working on building expert networks to work on awareness and implementation of natural climate change solutions.

But Fasih adds that it is necessary at present is to engage local communities (both urban and rural) to understand climate change, mitigate against it, and adapt natural solutions to climate using citizen and civic movements.

“Unless the government does not prioritize increasing awareness amongst the citizens, very little difference can be made by projects that require billions of dollars in funding,” adds Fasih.