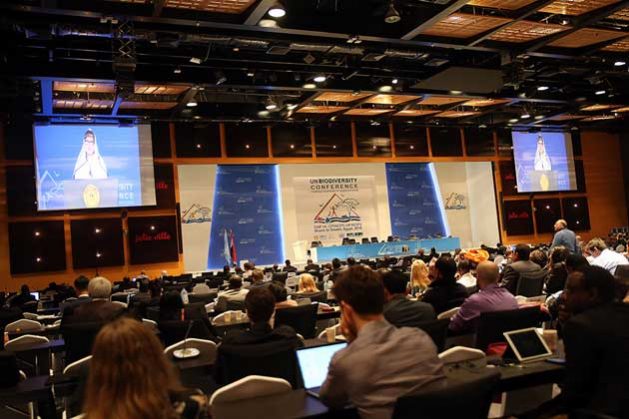 SHARM EL SHEIKH, Egypt, Nov 28 2018 (IPS) - Biodiversity conservationists have revealed that at least 10 more percent of land than what is currently being used to grow green crops will be required to successfully replace fossil fuels with alternatives derived from natural sources such as biofuel.

Speaking to government ministers and other high level representatives at the ongoing Biodiversity Conference in Egypt, Anne Larigauderie, executive secretary of the Intergovernmental Platform on Biodiversity and Ecosystem Services (IPBES), said that the increase in the need for land for energy-related uses could undermine natural habitats across the world.

Deforestation and forest degradation are one of the biggest threats to forests worldwide and, according to the International Union for Conservation of Nature (IUCN), in the last 60 years, over half of the tropical forests worldwide have been destroyed.

Currently, one of the biggest drivers of deforestation is the meat industry with over 2.71 million hectares of tropical forests destroyed to pasture for beef cattle every year. To put it into perspective, this is more than half of tropical deforestation in South America, and more than five times as much as any other commodity in the region. Other significant drivers also include wood products, soybeans, and palm oil.

“Degradation and loss of forests threatens the survival of many species, and reduces the ability of forests to provide essential services,” states Larigauderie. “And an increase in the need for more land could have devastating impacts that undermine the essential diversity of species on Earth.”

Established by 130 member governments in 2012, IPBES is an independent intergovernmental body that provides objective scientific assessments regarding the planet’s biodiversity to global policymakers – similar to the Intergovernmental Panel on Climate Change (IPCC) that was established 30 years ago.

During a panel discussion, Larigauderie said IPCC’s latest report gives a sense of “extreme urgency” on “tradeoffs and synergies between climate, biodiversity and land degradation.”

While it is uncertain just how much land is currently being used for biofuel crops, several researches estimate it lies between 15 and 30 million hectares. Meanwhile, IPCC predicts an increase of up to 744 million hectares in the land area needed to grow biofuel crops to slow down global warming.

“Where would this huge amount of new land come from?” asked Larigauderie. “Is there currently such a large amount of ‘marginal land’ available or would this compete with biodiversity?”

‘Marginal land’ refers to areas of land that have little to no agricultural potential because of poor soil or other undesirable characteristics.

Scientific studies on the better use of marginal lands have been going on for nearly two decades and studies show that marginal lands represent significant untapped resources to grow plants specifically used for biofuel production.

But some scientists also argue that there is not enough marginal land left to grow enough biofuels to significantly replace fossil fuels.

Larigauderie pointed out that the important issue of greenhouse gas emissions from human activities which drives up global warming needs to be addressed but relying on biofuels as a replacement for fossil fuels will almost certainly result in an increase in the demand for land which will have negative consequences on biodiversity – and consequently, carbon dioxide emissions.

Land ecosystems today soak up about a third of annual carbon dioxide emissions, with the world’s oceans accounting for about another quarter annually.

“Reforestation and safeguarding plant and animal species is far better at protecting the climate than most biofuel crops,” she stated. ““All methods that produce healthier ecosystems should be promoted as a way to combat climate change.”

IPBES intends to publish a primer detailing elements of its Global Assessment of Biodiversity in May 2019.