ROME, Mar 8 2018 (IPS) - The Esquilino market, built at the end of the 1800s, is a pillar of Roman traditional daily shopping. It managed to survive the Fascist period and two world wars: it’s a veteran of the city.

After being outdoors in the square of Piazza Vittorio for more than a century, on Sep. 15, 2001 it moved inside the former Sani barracks, just behind the square. Meanwhile, the social and demographic reality of that part of Rome had changed. Migrants of multiple ethnicities were moving to the Esquilino borough and their determination and resilience in building a new life and starting new businesses changed the shape and colour of that neighbourhood.

In Rome, after Romanians and Filipinos, Bangladeshis are the largest community of foreigners and today many of them are concentrated in the Esquilino borough.

Von Below, a historian, described the importance of the market in 1923: “Markets and periodic fairs contribute to the internal and external growth of the community, simply as the political and judiciary institutions do…a flourishing market attracts immigrants, who increase the number of visitors, of merchants and of population.”

Looking at the vibrant dynamism in the Esquilino Market in the heart of Rome, it’s easy to agree with von Below.

Once you pass through one of the four entries, crossing transparent curtains, you feel you have entered a world apart. It’s the market par excellence: colourful, vendors shouting and trying to attract clients, a mixture of smells which include not only traditional Italian food, but also crispy spices from India or Peru, exotic vegetables such as the ‘ampalaya’ from Sri Lanka, African fabrics of blinding tonalities, and so forth. Being here feels like being in Dhaka or Beijing’s food markets: a dynamic melting pot, both of sellers and of buyers. 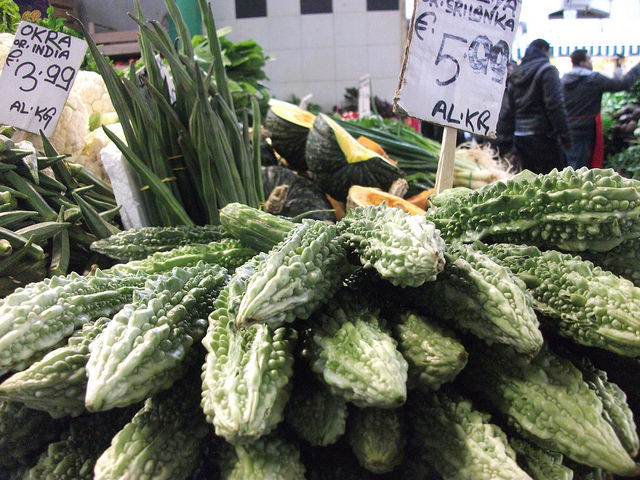 Bitter gourds, or “ampalayas”, are difficult to find in Italy, but easy to find in the Esquilino market in Rome. Credit: Maged Srour/IPS

Farhad was born in Bangladesh forty years ago. He has lived in Italy since 2005 and has no plans to move back since his wife and two children joined him two years ago. He’s one of the over one hundred Bangladeshis working in the market of Esquilino, which is a stronghold of Chinese and Bangladeshi presence in Rome; indeed, you can barely find Italians working there.

A fish seller, Farhad agrees to speak with this IPS correspondent. His compatriots are friendly but when I started asking pointed questions, many looked a bit suspicious. Farhad is more open. He talks about his life in Italy and about working in this multi-cultural environment. He looks relaxed and deems it a normal affair that people coming from five different continents work under the same roof.

He says that some of the Bangladeshis are owners of the stores while others work for Italians. This doesn’t seem to be relevant for him: Farhad works for a Bangladeshi, so he’s a day worker or labourer, but he seems satisfied with his life.

“I feel safe here. I am not saying that living in Bangladesh was dangerous. I was not suffering war as many other migrants from Syria do. I decided to come in Europe to look for opportunities and despite the financial crisis, I still feel that there is no place where I could live better today. My children go to school and receive a good education. Plus, there are many Bangladeshis here in Rome and so we miss less our homeland.”

When I ask him if he ever had problems with Italians inside the market, he responds: “No, we are all friends here. We have to work daily together. We are all Italians, because that’s what we all share: Italy.”

Farhad is one of the 132,397 Bangladeshis residing in Italy. Most of his compatriots arrived in Italy through dangerous routes that pass through Libya, where many of them suffered exploitation and violence. When I ask him about his journey he grows tense and avoids answering. He doesn’t feel comfortable in that noisy environment, and one can imagine his trip to Italy was a difficult one.

He continues describing the market’s routine: “Clients are mostly foreigners but many Italians come here as well, curious to mix with this coloured hub”. Farhad looks behind me and says: “Now I go back to work my friend, or my boss could be upset.”

I try to speak with other merchants. It becomes clear to me that in addition to the palpable energetic excitement, there is also a lot of diffidence and caution among workers. Moreover, the melting pot harmony is a bit superficial: there’s a clear division between the sellers of different nationalities.

Chinese, Egyptians, Romanians, Italians: every store works individually, engaging in a rigorous exercise of competition to catch the client. There is not much communication between them. Even clients prefer to buy from sellers of their same nationality – although that is not necessarily the rule, as I also saw Chinese clients buying from Egyptians or Ukrainians from Indians.

Before leaving, I speak with one of the few Italian vendors. Antonio, 65, has worked here for decades. Asked what he thinks about the market, he replies succinctly: “It sucks.” I thought he might be angry about the presence of so many immigrants but he adds: “No, it’s not about them. It’s this financial crisis that is still killing us.” With no hesitation, Antonio blames the Italian government. The only problem, for him, seems to be the fact that he’s not selling enough products. As James Carville would say: “It’s the economy, stupid.”

I leave the Esquilino market after having bought some dates from a Bangladeshi, crossing the transparent curtains again and still hearing the loud voices of sellers. In my mind, I hear the last words of Farhad saying “We are all Italians.” Indeed, there are vendors from all over the world, but all of them share the same roof, like a family.

And I feel perplexed. Yes, we do agree with von Below and with Farhad: the market is an opportunity of growth for the community, but that social unity that is still missing – a bitter reality reflected in the outside environment too. Maybe, that missing cohesion is the last dowel that could lead to a real multicultural and integrated Rome, at least in that borough.