PARIS, Mar 22 2018 (IPS) - The 2018 Paris Book Fair (Livre Paris) took place against the backdrop of demonstrations in Mayotte that echoed similar protests a year ago in French Guiana, putting the topics of literary activism and popular disaffection high on the agenda at the March 16-19 event.

Writers from France’s overseas regions and departments, which include Mayotte in the Indian Ocean, spoke out about their role and contribution to French literature, highlighting the social and economic conditions in their territories. 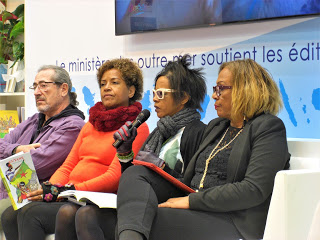 “The demonstrations were for better security, healthcare, infrastructure, transportation, all of which affects everybody,” said Joël Roy, one of the contributors. “Writers aren’t separate from this.”

In March 2017, strikes and protests in Guiana blocked streets, caused the temporary closure of schools and some businesses, and delayed the launch of a rocket from the aerospace centre that is run by France and the European Space Agency.

Reports of the demonstrations filled the airwaves in mainland France, with some commentators making it seem as if the population was being unreasonable (“We can’t keep sending money there,” said one Parisian). But writers have been among those spotlighting the hypocrisy in government policy, where money can be found to launch rockets but not to improve access to healthcare or to control crime.

French President Emmanuel Macron eventually visited Guiana to address the concerns of the 250,000 residents, and to make a number of pledges; but there was no political representation at the launch of Nou gon ké sa in Paris

French President Emmanuel Macron eventually visited Guiana to address the concerns of the 250,000 residents, and to make a number of pledges; but there was no political representation at the launch of Nou gon ké sa in Paris, despite invitations having been extended, said Tchisséka Lobelt, who chaired the literary panel at the fair.

While the authors and activists present (such as Sylviane Vayaboury and France Nay) evoked the grievances and injustice that led to the protests, they aren’t just waiting around for political support, although this would be welcome.

Lobelt, for instance, is one of the movers behind promoting the literature of Guiana and providing a platform for writers. In 1996, she founded an association called Promolivres, which in turn created the Salon du Livre de Cayenne – a biennial book fair that had its 10th “edition” last November.

The Salon attracts participants from neighbouring countries such as Brazil and Suriname, and the 2017 “guest of honour” was Colombia.

For Lobelt, intra-regional literary cooperation is important, and she believes translation can help to pave the way for readers to know more about the literature of France’s overseas departments and regions.

“Translation is key, and we have to develop a real policy to get books translated from French and Creole into other regional languages and vice versa,” she said in an interview.

Anglophone Caribbean writers such as Guyana’s Pauline Melville and Jamaica’s Alecia McKenzie (founder of the Caribbean Translation Project) have been able to participate in the Cayenne book fair because of translation, Lobelt said. Both have been winners of the Prix Carbet des lycéens, a prize awarded by French high-school students in Guadeloupe, Guiana, Martinique and (now) London.

In addition, French writer Jean-François Tifiou, who has written an absorbing and well-researched book about the women prisoners sent to Guiana when it was a notorious French penal colony, is looking at getting his work translated into English and Spanish. Tifiou visited schools in the region to present De Quimper à Cayenne (From Quimper to Cayenne), and many readers believe that the book deserves to be more widely known. 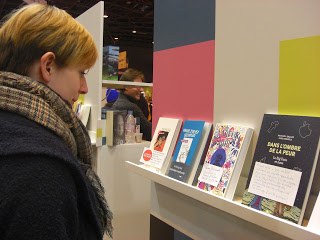 A visitor checks out some titles at Livre Paris.

“Even if we translated one book per year, that would already be something,” said Lobelt. “We can do a lot on our own, but we still need institutional help.”

At the Paris Book Fair, the French “Outre-Mer” Ministry emphasized support for writers and publishers from the overseas departments and regions, which are traditionally grouped at a special pavilion. The ministry cited the international stature and unique “witnessing” of writers such as Maryse Condé, Patrick Chamoiseau and Aimé Césaire, among others.

“Literature from the overseas departments has a true specificity, far from clichés and stereotypes,” said an official brochure. “As Chantal Spitz (Tahiti) has declared: ‘My country is not a postcard’.”

This was certainly borne out by some of the debates at Livre Paris (which, uncomfortably, had Russia as the 2018 “guest of honour”).

More than anything, what was notable was that many writers and publishing professionals seemed determined to open the eyes of those who would perhaps prefer not to see certain social situations.