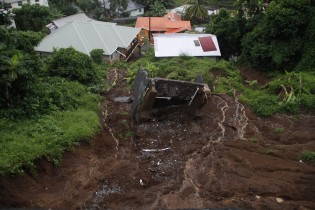 Q&A: On the Frontline, Islands Aim to Seize Climate Initiatives

By SWAN / A.D. McKenzie
The “all-virtual” Latin America and the Caribbean Climate Week (LACCW) that took place May 11-14 highlighted islands’ particular vulnerabilities in the face of both climate change and the Covid-19 pandemic. But the event - hosted by the Dominican Republic - also provided “important momentum for a successful UN Climate Change Conference” (COP 26) in November in Glasgow, according to the United Nations.

By SWAN / A.D. McKenzie
Cuisine formed a notable portion of the latest inscriptions on UNESCO’s Representative List of the Intangible Cultural Heritage of Humanity, with hawker food in Singapore and couscous traditions in North Africa being celebrated.

By SWAN / A.D. McKenzie
Ecuador’s entry for the 2021 Academy Awards’ International Feature section is a surprising movie, highlighting a story that up to now has been little-known. Titled Vacío / Emptiness and directed by self-taught filmmaker Paúl Venegas, the work focuses on how increasing numbers of Chinese migrants have ended up in Latin America over the past 15 years, and it features a cast of mainly non-professional actors – speaking Mandarin, Spanish, English and some Cantonese.

By SWAN / A.D. McKenzie
Chéri Samba has a sly sense of humour, both in person and in his work. Standing in front of his 2018 painting “J'aime le jeu de relais” (I Love the Relays) - which criticizes politicians who cling to power instead of passing the baton - Samba is asked about the resemblance of one of his subjects to a famous statesman.

By SWAN / A.D. McKenzie
The United Nations Educational, Scientific and Cultural Organization (UNESCO) has announced it is “launching initiatives” to support cultural industries and cultural heritage, sectors hit hard by the COVID-19 pandemic. “COVID-19 has put many intangible cultural heritage practices, including rituals and ceremonies, on hold, impacting communities everywhere,” the organization stated April 9. “It has also cost many jobs, and across the globe, artists … are now unable to make ends meet.”

By SWAN / A.D. McKenzie
When Jean-Michel Basquiat’s paintings were shown in France a few years ago, a visitor overheard a teenager remarking that the artwork seemed to have come from “a very angry little boy”.

By SWAN / A.D. McKenzie
The 2018 Paris Book Fair (Livre Paris) took place against the backdrop of demonstrations in Mayotte that echoed similar protests a year ago in French Guiana, putting the topics of literary activism and popular disaffection high on the agenda at the March 16-19 event.
ADVERTISEMENT ADVERTISEMENT