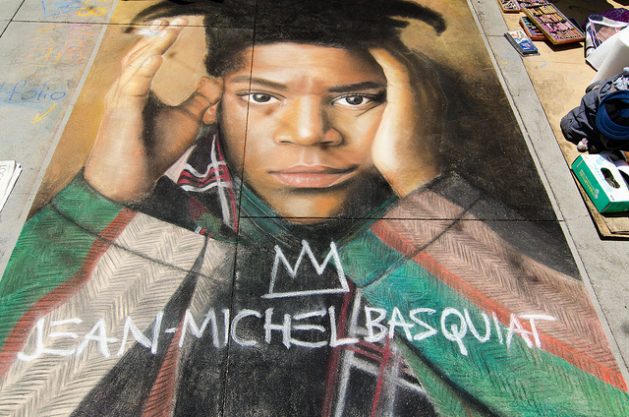 The works of Caribbean-American artist Jean-Michel Basquiat (pictured here) are on display in the the Louis Vuitton Foundation in Paris. It presents Basquiat in a new light, emphasising his status as a major figure in the history of art, 30 years after his death at the age of 27. Credit: CC by 2.0

PARIS, Oct 8 2018 (IPS) - When Jean-Michel Basquiat’s paintings were shown in France a few years ago, a visitor overheard a teenager remarking that the artwork seemed to have come from “a very angry little boy”.

Now, that sense of artistic fury or frenetic energy is put into context in a stunning new exhibition that comprises more than 120 works displayed in the remarkable setting of the Louis Vuitton Foundation in Paris  –  the museum and cultural centre designed by the architect Frank Gehry and launched in 2014.

The Foundation’s spacious galleries present the Caribbean-American artist in a new light, emphasising Basquiat’s status as a major figure in the history of art, 30 years after his death at the age of 27.

“The Foundation spotlights an artist I personally consider to be among the most important of the second half of the twentieth century,” said Bernard Arnault, president of the Foundation, and CEO of global luxury-goods company LMVH, which sponsors the museum.

In a foreword to the exhibition, Arnault, an avid art collector, added that the “complexity of Basquiat’s work is equalled only by the spontaneity” of the feelings it arouses.

“He figures among the origins of my collection and I owe him a tremendous amount for inspiring my passion for art in general, and for contemporary art in particular,” wrote Arnault, whose collection has contributed to that of the Foundation.

The exhibition comprises an impressive range of huge paintings and drawings on canvas, wood and other materials. They are shown in a thematic fashion that takes viewers into Basquiat’s thoughts and feelings about issues such as discrimination and inequality, and one can’t help being impressed by the immense number of works he produced in his short life.

The show runs in tandem with an exhibition on Austrian painter Egon Schiele, who also died in his twenties – 70 years before Basquiat, in 1918. Both artists are “signal figures in the art of their time, the early and late twentieth century respectively,” says Suzanne Pagé, artistic director of the Louis Vuitton Foundation.

Although their art is presented separately, in different parts of the museum, the artists are linked by “their breath-taking, youth-driven work” which has made them “icons” for new generations, according to Pagé.

The “Jean-Michel Basquiat” exhibition certainly addresses his iconic stature: his work is easily identifiable from his graphic style of painting, his use of vibrant colours and the subjects he addressed. As viewers walk through the eight galleries, over four flours of the museum, the works form a searing biography of the artist.

Born in Brooklyn in 1960 to a mother of Puerto Rican descent and a father from Haiti, Basquiat grew up with a love for art, as his mother took him to museums in New York and enrolled him in art lessons.

His childhood was marked by an accident in 1968 when, at the age of seven, he was hit by a car as he played in the street. While recovering from a broken arm and internal injuries, his mother gave him a copy of Gray’s Anatomy, a book on human anatomy with illustrations of body parts, skulls and skeletons. 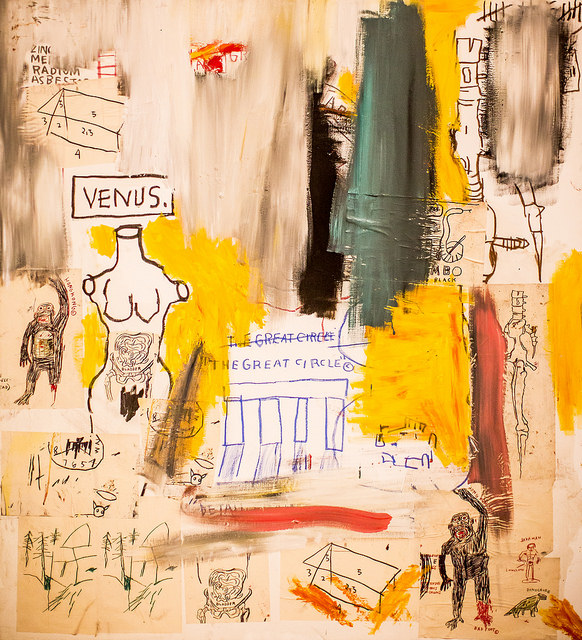 More than 120 works of Caribbean-American artist Jean-Michel Basquiat are on display in the the Louis Vuitton Foundation in Paris. Pictured here is his work Taking Venus. Credit: Thomas Hawk/CC by 2.0

According to biographers, this book would have a great influence on his work; indeed, a theme in the current exhibition is Basquiat’s preoccupation with the inner functions of the body and with dying.

As a child, Basquiat also experienced his parents’ separation and his mother’s mental illness, as the family moved between New York and Puerto Rico. He dropped out of high school at age 17 and was homeless for a while, producing postcards and other items to support himself. But his precocious talent soon caught the eye of gallery owners, collectors and fellow artists including the influential Andy Warhol.

“With a natural instinct for openness, linked to his twin Haitian and Puerto Rican roots, Basquiat absorbed everything like a sponge, mixing the lessons of the street with a repertoire of images, heroes, and symbols from a wide range of cultures,” Pagé said in a text introducing the exhibition at the Louis Vuitton Foundation.

The sequence of his works at the show begins with the 1980 painting Untitled (Car Crash) and ends with Riding With Death – a striking painting that depicts a figure on a horse-like skeleton and which Basquiat produced shortly before he died in 1988 of a heroin overdose.

In between, visitors can view the works portraying boxers such as Sugar Ray Robinson and Cassius Clay / Muhammad Ali, and see Basquiat’s artistic and political commentary on exploitation and the slave trade through paintings that include Price of Gasoline in the Third World and Slave Auction.

“Basquiat mirrored himself in his figures of black boxers and jazz musicians, as well as in victims of police brutality and everyday racism,” said Dieter Buchhart, curator of the exhibition, in an interview published by Le Journal de la Fondation Louis Vuitton.

“He connected the Black Atlantic, African diaspora, slavery, colonialism, suppression and exploitation with his time in New York in the 1980s, always keeping his own circumstances in view as well as those of humanity in general.”

For Basquiat, who was a forerunner of hip-hop culture, music and musicians were an essential part of the diaspora experience, and he paid homage to jazz artists, particularly Charlie Parker, with Horn Players, Discography and other works in his signature style of skulls, teeth, frantic figures, and text that send cryptic messages.

His collaborations with Warhol also form a significant part of the exhibition, with huge mural-type paintings that they jointly produced. The painting Eiffel Tower illustrates their respective styles as they playfully depict the most symbolic structure in the French capital. It’s a fitting inclusion in this Paris-based retrospective.