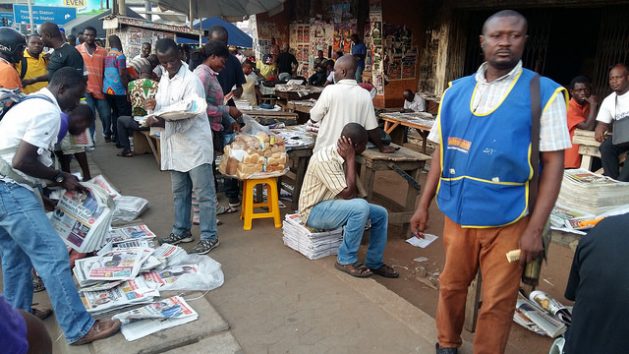 ACCRA, Apr 30 2018 (IPS) - Ghana is a living contradiction, at least in the arena of freedom of expression, free speech and press freedom.

It is touted as one of the continent’s best atmospheres for media workers and does have a highly free media space, being ranked number one in Africa and number 23 in the World Press Freedom Index 2018 by Reporters Without Borders.

But that only gives half the picture of the culture of freedom of speech, information and the press in the country. Just last month a journalist from one of the country’s top media houses was beaten to near death by the police.

His crime was that he was doing his job as a journalist and had asked a police officer who had been deployed to disperse a demonstrating crowd the name of one of the anti-riot vehicles. That harmless question was enough to provoke the officer, who pounced on the journalist and was later joined by other officers who had no clue what crime the journalist had committed.

Latif Iddrisu suffered facial, neck and rib injuries and has been experiencing intermittent pain since. He was diagnosed with a fractured skull after four X-ray examinations and a CT Scan. The journalist, who has been recovering at home for close to a month now, says he’s been traumatized as he awaits doctors’ final verdict about whether “I will be in a position to work actively again”.

“For now, all that I have been praying for is a good outcome so that I can get back to work and do even much better, much more ground-braking documentaries and impactful investigative stories to help build the nation,” he told IPS. 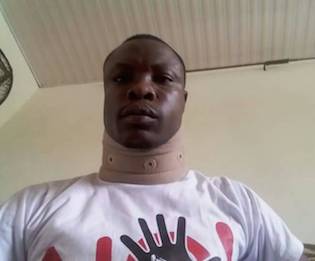 Latif Iddrisu in the hospital after being assaulted by police. Photo Courtesy of Latif Iddrisu

The vicious attack on Iddrisu was not an isolated incident. It adds to a long list of attacks on journalists by politicians and their supporters as well as ordinary people, with personnel from the security forces, especially the police, leading the onslaught.

Such abuses against journalists are commonplace in the West African sub-region in particular and Africa in general. The Media Foundation for West Africa’s compilation of abuses against journalists in the region gives a very gloomy picture of press freedom culture. In the past 15 months alone, the Foundation has compiled 12 such assaults with a total of 17 journalist victims in Ghana. And these are just the cases that caught the attention of the Foundation.

In the sub-region, the Foundation says it recorded “nine violations in six countries during its monitoring of the freedom of expression environment in February 2018. Five incidents of physical assaults were recorded in four countries – Liberia, Cote d’Ivoire, Nigeria, and Ghana. Mali, Togo and Nigeria recorded one incident each of arrests and detentions, while Benin recorded one incident of suspension of a media house. The violations affected ten journalists, 11 citizens and one media organisation”.

These abuses continue despite the embrace of democracy and the rule of law by all countries in the sub-region. New constitutions guaranteed basic human rights, including freedom of expression and, in many cases, freedom of the press. But many countries still maintain what some have described as colonial-era laws that restrict free press and expression which are inconsistent with their constitutions.

A typical example is the use of criminal defamation laws – laws which criminalise the publication of untrue statements, reports or rumors that are likely to alarm the public – in African countries to harass, detain and imprison journalists, as well as impose hefty fines.

In the sub-region, countries such as Sierra Leone and Liberia have long promised to repeal the laws, but this is yet to happen. Liberia, for instance, attracted the world’s attention in 2013 in what is arguably the most infamous libel defamation judgment in West Africa. The Supreme Court on August 20, 2013, sentenced Rodney Sieh, the Managing Editor of the FrontPage Africa newspaper, to 5,000 years in prison after the journalist was unable to pay a fine of 1.5 million dollars in a civil suit for defamation brought by then Minister of Agriculture, Chris Toe.

Of course the jailing of two editors of the Independent Observer within hours of publishing a column comparing Sierra Leone’s President Ernest Bai Koroma’s behaviour to that of a rat also attracted global attention and condemnation. The 10-court-appearance case dragged out for six months (October 2013 to March 2014) and eventually saw the cautioning and discharge of the journalists after they were forced to plead guilty to conspiracy to defame the president as part of a deal to end the case.

Commenting on the case, Reporters Without Borders said, “The government’s policy of harassing the media is a threat to fundamental freedoms. The authorities use criminal defamation and sedition charges to intimidate journalists and then allow the proceedings to drag on in order to keep up the pressure.”

The story could only be worse in countries like Guinea, Mali, Niger and Nigeria which have for a long time remained adamant in refusing to repeal criminal defamation laws.

And this is where Ghana stands tall. The West African country has distinguished itself on the continent and in the sub-region, having repealed its criminal libel law since 2001, beating its colonial master the United Kingdom which repealed its law in 2009. This accolade makes Ghana the only country in the sub-region to have done so with a clear 17-year margin. But even here, journalists and media houses are not out of the doghouse yet. 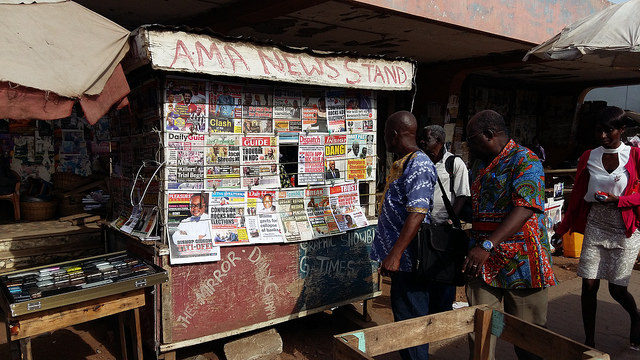 Ghana enjoys a thriving press and is ranked number one in Africa in terms of media freedom. Credit: Kwaku Botwe/IPS

Politicians, public office holders and businessmen can still press for civil charges, which may bring hefty fines. In February 2014 the General Secretary of the then political party in power, Johnson Asiedu Nketia, was awarded 250,000 dollars in defamation damages (25% of what Ntetia demanded) against the Daily Guide newspaper by an Accra Fast-Track High Court.

It was in respect to a story which alleged that Nketia used his position in government to divert building materials for his personal building project. In spite of this, it is still refreshing to note that no journalist would ever spend a day in prison for what they publish, a fact journalists Kweku Baako and Haruna Atta who were imprisoned in 1998 using the libel law will appreciate.

Ghana has not been able to consolidate its commitment to free press with a right to information (RTI) law which is a fundamental human right guaranteed by the country’s constitution. This is against the backdrop of several treaties and agreements the country has signed which require that such a law be passed.

Ghana’s RTI bill was drafted and reviewed by government in 2003. Since then parliamentarians have discussed it, referred it, reviewed it and published it – anything but pass it. Interestingly parliamentarians have passed about 300 bills into law since 2003, with one of the latest being the special prosecutor law which was a campaign promise by President Akufo-Addo.

More than 15 African countries, including seven in West Africa, have passed the RTI law since Ghana first drafted its own in 2003. And yet the West African country ranks higher in press freedom among all these countries. The reluctance of politicians to pass the RTI bill has left many to conclude that successive governments dread what the passage of an RTI will mean for their corrupt deals.

The executive director of the Media Foundation for West Africa, Sulemana Braima, says “It is regrettable that we are hosting this global event without the RTI,” adding that “the absence of the law remains one of the darkest spots on our democracy, freedom and human rights credentials.”

When Ghana was selected as the host of this year’s World Press Freedom Day, having beaten India and other prominent countries, there were some who thought the nonexistence of an RTI law was a big blot on an otherwise reputable event. But Ghana is not the first country to host the event on the continent.

It becomes the sixth country to host the event in African and the second in the West African sub-region (Uganda, Namibia, Senegal, Monzambigue, and Tunisia have all hosted the event in the past). It appears what determines a host country is not based solely on press freedom practices.

When Colombia hosted the event in 2007 it was in recognition of the 10th Anniversary of the establishment of the UNESCO/Guillermo Cano World Press Freedom Prize. Cano was a Colombian journalist who was killed by hired assassins in 1986. Since the inception of the Prize in 1997, two African journalists have won it (Christina Anyanwu, Nigeria in 1998 and Geoffrey Nyarota, Zimbabwe in 2002). Tunisia seem to have won the host in 2012 because of the theme: 21st Century Media: New Frontiers, New Barriers, New Voices with the Arab Spring as a main focus.

And so with this year’s global theme: Keeping Power in Check: Media, Justice and The Rule of Law, Ghana definitely fits in. Again, going by milestones and anniversaries it looks as if Ghana’s celebration of 25 years of uninterrupted democratic governance and the rule of law (1993 – 2018) has coincided with the 25th Anniversary of the establishment of the World Press Freedom Day. A good reason to celebrate it on Ghanaian soil.