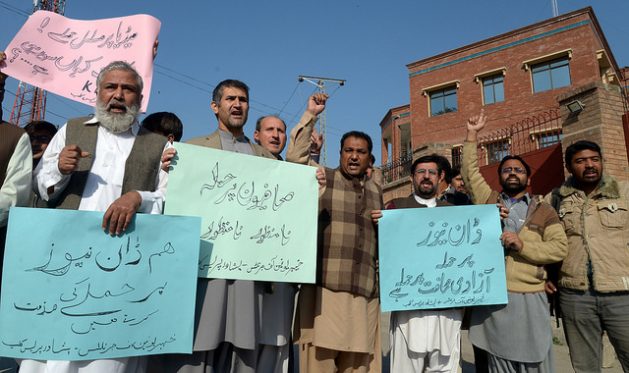 ROME, Apr 22 2018 (IPS) - The 25th celebration of World Press Freedom Day will be led by UNESCO and the government of Ghana in Accra on May 2-3. The theme is “Keeping Power in Check: Media, Justice and The Rule of Law,” covering the issues of media in respect to the judicial system and transparent political processes.

At the same time, the conference will discuss state institutions’ accountability towards their citizens.

• Officials in more authoritarian settings such as Turkey, Ethiopia, and Venezuela used political or social unrest as a pretext to intensify crackdowns on independent or opposition-oriented outlets.

• Authorities in several countries in sub-Saharan Africa, the Middle East, and Asia extended restrictive laws to online speech, or simply shut down telecommunications services at crucial moments, such as before elections or during protests.

The day takes place in the context of the 2030 Agenda for Sustainable Development, adopted by the UN General Assembly in 2015, which includes 17 goals for achieving sustainable development for all, including ending inequalities between men and women. Among the goals, Sustainable Development Goal (SDG) 16 focuses on promoting just, peaceful and inclusive societies.

Peace, justice and strong institutions allow for good governance as well as other sustainable development efforts to thrive, facilitated further by an independent and enabling media environment.

Today, the number of countries with right to information laws is steadily increasing. The international normative framework regarding the safety of journalists, and particularly women journalists, has been significantly bolstered through the adoption of resolutions at the UN General Assembly, Security Council, Human Rights Council and UNESCO, and there is greater recognition of the right to privacy.

Governments of these countries tend to implement restrictive laws and censorship on freedom of press, usually justifying these actions as a necessary tool for national security against terrorism. Apart from violating the right of freedom of expression, these restrictions place higher risks of violence, harassment and death on journalists.

According to the 2017 World Press Freedom Index, violence and restrictions against media freedom has risen by 14% in the time period of 2012-2017. At the same time, since 2016, media freedom in countries where it was ranked as “good” decreased by 2.3%.

The level of restriction on press freedom has been one of the highest in MENA countries such as Syria. Even though article 43 of Syria’s Constitution guarantees freedom of the press while a 2011 media law bans monopolistic media alongside with “the arrest, questioning, or searching of journalists,” these laws are not practiced in the government-held areas of the country. According to the media law, publication of any information on armed forces and spread of information that might affect national security and provoke “hate crimes” is forbidden in Syria. In case of violating this law, journalists are held accountable and fined with 1 million Syrian pounds ($4,600).

At the same time, despite the fact that article 3 of the media law guarantees freedom of expression as stated in the Syrian Constitution and the Universal Declaration of Human Rights, article 4 of the same law declares that the media must practice this freedom with “awareness and responsibility”.

Consequently, this broad wording allows the Syrian government to restrict press freedom in multiple ways and in case of disobedience, punish journalists for anti-state crimes. For instance, in December 2016, the government imprisoned seven Syrian journalists through security-related legislation and used torture to receive their confession.

From the political perspective, Syrian authorities spread propaganda and false information while forcefully restricting publication of news in the government-controlled areas. Distribution of “all printed material” has been led by the General Corporation for the Distribution of Publications, responsible for censorship in Syria. This, alongside the economic problems caused by war, has decreased media diversity in the government-controlled area, leaving only a few dozen print publications which rarely deal with the political issues.

From the economic perspective, most of the print publications are owned by the government-allied businessmen who also control editorial policy. This, on the other hand, intensifies the problem of the non-existent free press in Syria.

However, despite this fact, in the opposition-controlled territory new print and broadcast outlets have emerged, funded by volunteers and some of them based abroad. For instance, the opposition TV channel – Orient TV owned by Ghassan Aboud, an exiled Syrian entrepreneur – broadcasts from Dubai while having correspondents in Syria.

According to Michael J. Abramowitz, president of Freedom House, “when politicians lambaste the media, it encourages their counterparts abroad to do the same…[undermining] democracy’s status as a model of press freedom.”

The case of Syria demonstrates how the absence of press freedom and an independent judiciary triggers development of authoritarian governments. The “just, effective and independent judiciary” is a base for an effective rule of law which builds a strong democratic system, guaranteeing the right of freedom of information, expression and safety of journalists.

This, on the other hand, provides free press that is compulsory for representing political will and needs of people, and for establishing good governance. Press freedom allows journalists to monitor and report about the on-going events taking place in different sectors of the state. As a result, this makes it possible to hold governments accountable towards their people and helps to accomplish the 2030 agenda of Sustainable Development Goals.