Cultural and Religious Diversity at a Crossroad: The Promotion of Equal Citizenship Rights to Deconstruct and Eliminate the Vulnerability of People

GENEVA, May 30 2018 - The world’s population now stands at approximately 7 billion people spread among 7 continents. The United Nations is comprised of 194 States. There are more ethnicities than the world’s countries. It is estimated that there are more than 6,500 languages worldwide. The Earth’s population is divided among major world religions and civilizations that have contributed to the world’s evolution since time immemorial. The Earth is a cultural mosaic and an arena of dynamic interchange between cultures and civilizations. 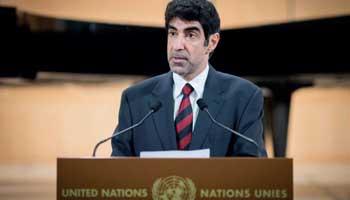 Despite the fact that the world has a long history of multi-culturalism and our individual and collective experiences have been enriched accordingly, current trends invoke concern for the future. In Europe, the re-birth of populist xenophobia and right wing extremism is a reality. Populist parties are securing electoral victories in local and national elections. They have re-emerged as an active political force gaining support from different layers of society. An Orwellian future – destructive to the ideals of an open and tolerant world society – seems to beckon. Comments such as these portend a future of intolerance: “We don’t see these people as Muslim refugees. We see them as Muslim invaders,” and “Multiculturalism is a fiction. Once you let migrants in, you can face such problem.” These inflammatory sentiments expressed by decision-makers in Central Europe mark their strong opposition to the influx of people on the move seeking refuge in Europe. The fear of the Other has emerged as the magical Silver Bullet in political campaigns worldwide. It is an antagonistic issue being used to gain power and popularity undermining authentic leadership and real concern for people.

The cultural and religious heritage of societies in the Middle East and North Africa is under threat. Since 1991, the Arab region has witnessed major armed conflicts in Iraq, Yemen. Libya, Sudan and Syria. The results after 15 years of warfare: approximately 15 million people displaced and more than 500,000 casualties. And the numbers are likely to increase in view of recent military escalation in Syria. The bereavement brought to the Arab region has also paved the way for the destruction of multicultural and multi-religious societies. In Iraq, only 1/10 of the Christian population, remains in their homeland. The same pattern prevails in other Arab countries, such as Syria, where ethnic and religious minorities once constituted a significant share of the population. However, decades of foreign interference and armed conflict have left their mark on the future of the Arab region. No wonder El Roto, the famous cartoonist of El País, said: “We send them bombs, and they send us migrants”.

How can we turn this tide and identify a process that enhances the celebration of diversity?

Inspired by this vision, the Geneva Centre will convene a major world conference entitled “Religions, Creeds and/or Other Value Systems: Joining Forces to Enhance Equal Citizenship Rights” on 25 June 2018 at the United Nations Office at Geneva. Under the patronage of HRH Prince El Hassan bin Talal of Jordan, it will bring together leaders from the world’s main religions, whether spiritual or lay, to give further concrete substance to the ideals that unite humanity. Religious leaders, politicians and community leaders must recommit themselves to identify appropriate ways to muster support for the promotion of equal citizenship rights. Ultimately, when equal citizenship rights are achieved, and all citizens can enjoy indiscriminately the same rights, privileges and duties, they will be looked upon as equal citizens as prescribed in the holy books and as imagined by all of the Prophets.

In times when religion has been considered as a source of division, the unified voice of all religions and value systems could reverse and roll-back the spread of hatred, bigotry, racism and the fear of the Other. Greater prominence must be given to rediscover commonalities between major world religions, creeds and value systems so as to give people a sense of belonging guided by harmony, diversity, unity and equal citizenship rights. Although not a panacea, the latter is a major building block in restoring peace and breaking the cycle of fear which has reached a level not witnessed since the end of the Second World War.

The World Conference will be the ultimate starting-point to break down the walls of ignorance and prejudice that are becoming – alas! – the hallmark of modern society.