UNITED NATIONS, May 2 2018 (IPS) - Buoyed on by the likes of United States’ President Donald Trump, a growing number of political leaders are encouraging hostility towards news media and journalists across the globe are finding it harder than ever to do their jobs.

This is among the main findings in Reporters Without Borders’ (RSF) annual World Press Freedom Index which examines 180 countries and their relationship with the media. 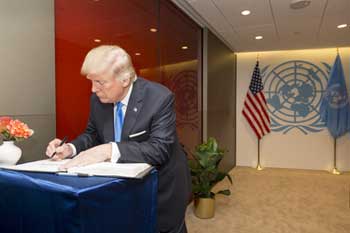 While launching the report, RSF’s Secretary General Christopher Deloire reflected on the erosion of one of free societies’ most treasured principles: a free press.

“The unleashing of hatred towards journalists is one of the worst threats to democracies. To dispute the legitimacy of journalism today is to play with extremely dangerous political fire,” Deloire said.

According to the report, the U.S. is partly responsible for the downward trend of the media’s image globally.

The report highlights the impact of Trump’s “Fake News” slogan- a reference used to discredit and deny news reports.

“Trump’s ‘fake news’ phenomenon has certainly had a global impact. Leaders of countries both democratic and authoritarian have taken advantage of this language to conflate any critical news coverage with false news coverage or misreporting,” RSF’s North America Director Margaux Ewen told IPS.

Trump’s method of dismissing media has been picked up by a growing number of world leaders, the report found.

“More and more democratically-elected leaders no longer see the media as part of democracy’s essential underpinning, but instead as an adversary. Trump himself has called reporters ‘enemies of the people,” Ewen said.

“It’s sad that the U.S. – often seen as a shining beacon of press freedom and democracy is slipping, it’s no longer the gold standard,” she continued.

Unsurprisingly, this year’s report saw the United States drop to number to 45 in the index, down two spots from its 2017 rank.

Whilst European countries Sweden and Norway ranked the freest media environments in the world, the region as a whole had more nations drop down the list than any other.

European nations such as Malta, Slovenia, Czech Republic, and Serbia all fell considerably.

“With the rise of populist politics and strongmen leaders, Europe’s downward trend will likely continue,” the report stated.

In Europe, recent high profile journalist killings – the murder of Daphne Galizina in Malta and the Jan Kuciak in Slovakia – have been attributed to the region’s dip in rankings.

The report highlighted several cases where countries have slid in the ranks due to ‘strongmen’ leaders.

For example, Philippines dipped to 133 on the list largely due to its President, Rodrigo Duterte, who often justifies the killing of journalists.

Last year, four journalists where killed in the country for their work, earning it the reputation of the most dangerous country in Asia for journalists.

Turkey also fell in this year’s ranking to 157. Its president, Recap Tayyip Erdogan has long held the media in contempt.

The country now has more reporters in jail than anywhere else in the world.

Similarly, Eritrea came in at at the bottom of the ranking. The report noted that the media are subject to the whim of President Isaias Afeworki who has overseen a deterioration in human rights and global freedoms.

After questioning the government’s authoritarian tendencies, Swedish-Eritrea journalist Dawit Isaak was arrested in 2001. He has been detained for the past 17 years without ever being brought to a court.

The UN has since called on his release, and RSF recently submitted a report to the African Commission on Human and Peoples’ Rights with concerns over the state of press freedom in the East African nation.

However, RSF found that press freedom in Africa has improved—though the variation from country to country is still considerable.

Whilst Ewen admitted that there was not many positives to draw from the report, she says a silver lining is the future appointment of United Nations special representative for journalists.

“That will mean that we can immediately coordinate international efforts for the press when a journalist is in danger. That’s something RSF has been leading for the past few years, along with more than 130 supporting NGOs and media outlets,” Ewen told IPS.

“That’s something we can look forward to,” she continued.